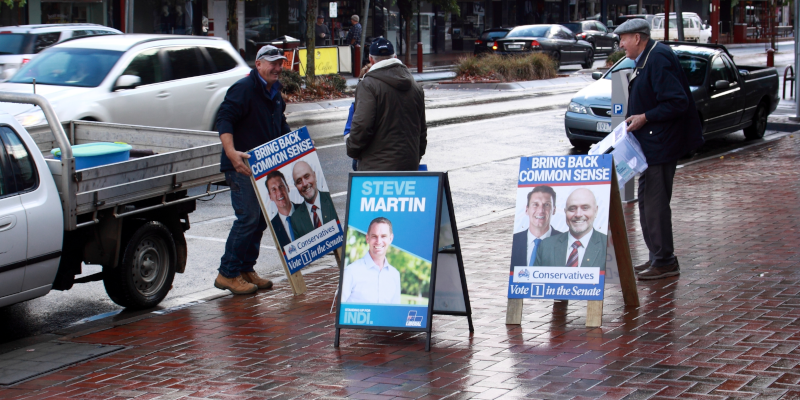 No Fibs received a tip that local Liberal Greg Mirabella was setting up pre-poll for Bernardi’s Senate candidate most mornings and their A-frame signs were being placed side by side. I went along on Friday morning to investigate.

I witnessed Liberal Wangaratta branch president Stephen Hill arrive in his company ute and remove A-frame signs from his vehicle for both the Indi Liberal candidate and the Australian Conservatives Senate candidate Kevin Bailey, placing them side by side.

This comes in the wake of revelations that Libs are handing out how-to-vote cards for Clive Palmer’s United Australia Party (UAP) and claims by Victorian state director of UAP, that Libs are “funding their workers”.

The woman on the right in the Liberal photo handing out for the Liberals…later that day handing out for Clive Palmer. So Liberals want to ensure UAP preference suggestions get handed out in marginal seats like Dunkley…classy #auspol pic.twitter.com/p6r998c9XJ

No Fibs has contacted the Victorian branch of the Liberal Party and is waiting for a response.