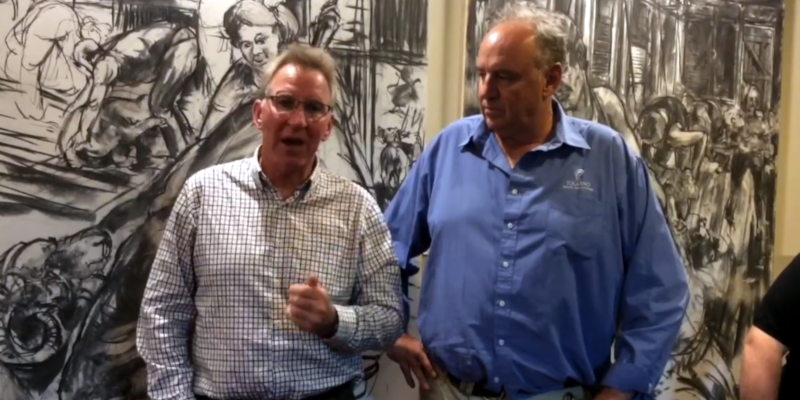 McBride has made a series of passionate calls for voters to elect Independents who support a Royal Commission into the Murray-Darling Basin Plan and water buy-backs.

In an interview with No Fibs, McBride sent a clear message to the current Liberal Member for Farrer:-

For Sussan Ley, look, it’s time for another occupation because when you did not protect your constituents — and you clearly didn’t — then it’s time to move on.

McBride made his initial call for voters to back Independent Kevin Mack on Facebook community group Voices For Farrer (@VoicesForFarrer) then posted to Twitter.

AN ELECTION MESSAGE FROM OUR FRIENDS – @TolarnoStation was in Farrer until boundary redistribution. Owner Rob McBride famously used a video to show the world the ecological disaster of a million dead fish in the Lower Darling. He is endorsing @Mack4Farrerhttps://t.co/Ovml9moRrY pic.twitter.com/zStwGrZbyj

There was 70 gigalitres of water that was going to come down the Darling and potentially the bad guys said: ‘Oh no we need it in the northern basin because we might lose 180 jobs in industries’. Sussan Ley was at the forefront of voting to keep the water in the northern basin which means it didn’t come down past Bourke. Our Darling River system dried up and her constituency on the Murray are being crucified because they’ve got no water entitlements this year… if there’s no water coming down the Darling the poor bastards are going to be killed.

Ley accused McBride on Twitter of wanting “water to go down to South Australia right? Where you live”.

However, the McBride family has been prominent pastoralists in South Australia for over 150 years and has farmed on Tolarno Station at Menindee in NSW since 1949.

Ley also inferred McBride was in bed with the Greens.

I think I know the irrigators in my electorate. And the pressure your plans would place them under. And I’m pretty sure they would run a mile from your agenda. pic.twitter.com/XCNOLyJZR9

We worked hard in our region to get the Shooters and Fishers in on a state level… we’ve been supporting a number of Independents and Jeremy Buckingham as a Green. We are apolitical, I do not support a political party. At Tolarno Station we support the people who are going to do the right thing by the river.

According to McBride, Mack is very switched on and aware that Darling and Murray River users have to work together because if there’s no water coming down the Darling then the Murray gets “crucified”. He believes the Murray-Darling River system is in a state of collapse.

McBride also raised concerns that Native Title water rights of the Barkindji People are being ignored and this was having severe impacts on their health and culture.