Following my compass as it points #Indivotes Green, by @TomAnderson62 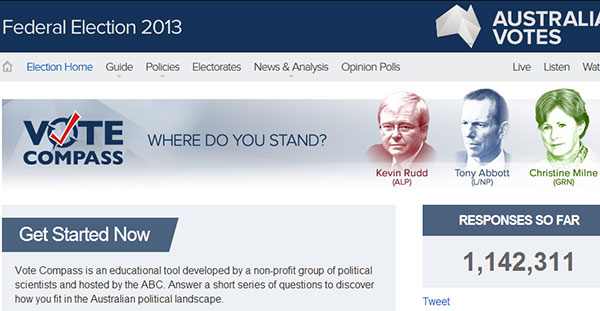 On the 17th of August 2013, I joined what are now more than one million Australians who completed the ABC Vote Compass questionnaire.

As I said in The night I got politically engaged’: How @TomAnderson62 found himself live tweeting #Indivotes:

My decision on how to vote was always made when I weighed up all policies of both parties, giving weight to those that I felt were more important and discounting those that I didn’t like but could live with.

Thanks to Vote Compass, what used to a long laborious task now takes about fifteen minutes to complete. I found out that the party which mostly shares my opinions on both a weighted and non-weighted result is the GREENS!

I honestly did not see that coming, and I thought it must have been a mistake. So I reviewed my answers and made a few tweaks after re-thinking all my previous answers, I found I had moved even closer to the GREENS.

Then I took the time to think about it.

In the last eight years my life has changed dramatically. I have gone from working as project leader at a software company to a support worker in the disability sector.

I have become an advocate for the rights of people living with a disability. They were the forgotten, most marginalised group in our society who have within the period of my life escaped the Institutional model of care to a more community-based residential model. It is an improvement but we still have a way to go.

My thinking had become more progressive, I am a lot more involved with social issues but my political views were still old school.

It was time for a re-think.

I could either read everything I could about the Greens online or I could go direct to a reliable source, the local Greens candidate Jenny O’Connor. (@JennyJenocon). So I contacted her on Twitter and she agreed to meet me for a chat for at her local at Beechworth.

“Do you want to record this?” she asked. Whoa I thought, who did she think I was, some kind of real journalist?

No, I said, I don’t need to, I will just write and grab a few quotes to use. I explained I try to write about the ‘gist’ of the subject, about how I interpret the Information at hand. .

I explained that I was ‘following the compass’ which had led me to the Greens. She commented that several people had told her that.

We talked about social issues, asylum seekers, climate change and dental care. We talked about how the Greens had progressed from ‘the hippie tree hugging party’ of the Franklin Dam era to a very progressive party that has a lot more in common with rural areas and farmers these days – my words not hers.

“The old enmity is going and it needs to,” she said. “We are facing unprecedented challenges with climate change, loss of agricultural land and despair in rural communities.

“Greens policies have been formed in consultation with farmers, so they are informed by the needs of the rural community.  We are the only party that is now endorsed by the Victorian Farmers Federation.”

The more she spoke the more I listened and the more I wanted to listen. In my first No Fibs article I wrote:

I was wrong, Jenny is not just selling a party message. She is strong, articulate and full of passion, not just for the party message, but her own personal values, principles and beliefs, which happen to align with those of the Greens.

Jenny has been a regular part of the local election scene, having spent ten years campaigning at federal and state elections, mainly as the local Greens candidate. The exception was in the 2007 federal election where she ran as the number two candidate on the Greens Senate ticket in Victoria.

Jenny also is the first Greens party candidate to be elected to a rural council, the Shire of Indigo, in October 2012.

She said she would never run for the Senate again unless she was offered the number 1 spot.

I was starting to believe that a person of her character was wasted in the seat of Indi. Jenny O’Connor belongs in the Senate.

I hope that at the next federal election she will be given that opportunity.

Just think – a rural-based Greens Senator for Victoria. Rural Australians need a Green and especially #Indivotes own Jenny O’Connor’s voice in the Senate.

A passionate intelligent voice for all. It is a view also shared by quite a number of locals.

I left feeling a slightly greener shade of green.