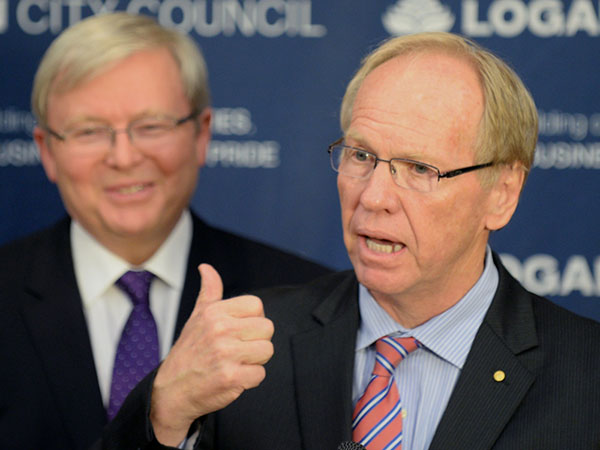 For most south-east Queenslanders, the Division of Forde can be summed up in two white words on a green signpost: Beenleigh and Logan, exits off the MI between Brisbane and the Gold Coast.

To a zillion daily commuters and travelers heading north and south along the Pacific Highway, these signposts mark the motorway at its widest Queensland point, 10 lanes wide.

Only residents and freight deliveries exit at Beenleigh and Logan, suburban heartland pockmarked with loose strings of franchise and corporate retail monoculture. For the rest of the nation, the Division of Forde is an extraneous somewhere you drive past, not through.

All that changed when former Queensland premier Peter Beattie threw his hat into the 2013 election ring, the so-called ‘captain’s pick’ of Prime Minister Kevin Rudd, a bellwether for the Labor Party’s electoral chances, a maverick pitch for voters’ attentions nationwide.

Former Queensland premier Peter Beattie will run for Labor in the Brisbane seat of Forde. (AAP)

For if Beattie can snatch Forde from the Liberals, then parochial political common sense says the ALP will hold on to government – why else would the consummate politician that is Peter Beattie stand for election, if not a) to win and b) assume a cabinet post which leads to c) a whole lot more of Canberra’s legendarily fickle attention for the people of Forde?

One Beenleigh constituent said she didn’t even know the name of her local MP until last week, when the national media spotlight catapulted Forde from backseat oblivion to centre stage.

That would be, as the nation now knows, one Bert van Manen – a family values Christian who grew up in the electorate and, given the vision for Forde he outlined in his maiden speech in 2010, plans to die there.

Forde is traditionally held by the government of the day – that is, it was until Mr van Manen tipped tradition on its head and won Forde for the Liberal Party despite an (exceedingly marginal) Labor election victory in 2010.

And while the major parties slug it out for Forde, tossing about probably genuine platitudes on jobs and infrastructure, with The Greens’ Sally Spain running on a predictable platform of biodiversity, green space and bushland protection, a handful of peripheral candidates ensures Christian loyalists in the constituency are spoiled for choice when casting their vote.

Jan Palkallus is standing for the Citizens Electoral Council and, twice polled by phone in recent weeks, is unimpressed that as a representative of a 25-year-old political party the pollsters have billed her candidacy as ‘other’. And while she stands for Christian values, Jan Palkallus (who ran against Kevin Rudd in the 2010 election) is more correctly ‘philosophically aligned with Judao-Christian-Islamic values – there’s one god, we’re all human,’ she says.

Clive Palmer’s nephew Blair Brewster is standing for the Palmer United Party. Mr Brewster is the founder of the Coomera Hockey Club and, like most candidates, highlights infrastructure, transport and community facilities as his priorities.

With opinion polls putting frontrunner Bert van Manen ahead of Peter Beattie by four percentage points, and Forde residents stuck for hours in traffic north and south and infrastructure plans that include stringing above-ground high voltage power lines along the Logan River, Forde can go either way.

Between now and September 7, we’ll be putting the policies and claims of Forde’s candidates under the microscope – because it’s all very well claiming they will, among other things, ‘reduce living costs’, ‘create more jobs’ and ‘increase infrastructure’, here at No Fibs we want to know how such noble aspirations will be achieved – and at what cost (and we don’t just mean financial).