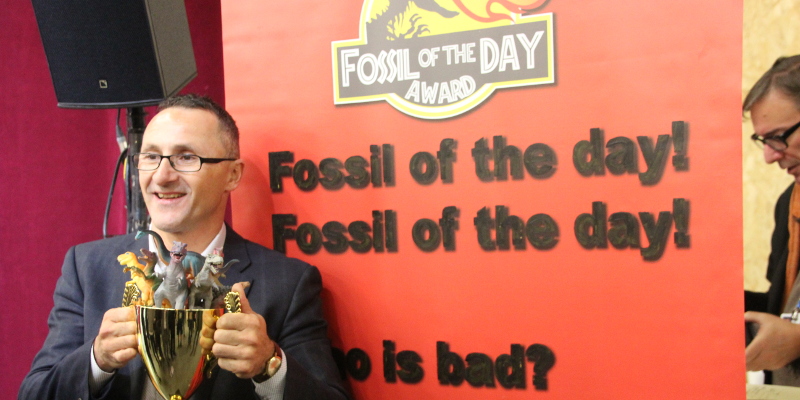 Australia and Argentina shared a first place Fossil of the Day award for Wednesday 9th December at the UN Climate Change conference in Paris, for fostering coal projects when the world is rapidly turning away from coal due to the impact of greenhouse gases in driving climate change.

Leader of the Australian Greens Senator Richard Di Natale was on hand to receive the award for Australia.

Both Argentina and Australia endorsed inclusion of the 1.5 degree temperature limit, along with the 2 degree C limit, in the operative text of the draft agreement during negotiations. At least 109 countries of the 196 countries attending the conference have stated they want to see this lower limit included, lead by the Climate Vulnerable Forum.

Behind the scenes, I have been hearing that the Australian delegation has been a positive force providing bridging and compromise proposals between other parties to help the French Presidency of the conference achieve an agreement at the end.

On the Tuesday evening Julie Bishop, leading Australia’s delegation as the Foreign Affairs Minister, made the following statement at a forum hosted by Indonesia called “Pathways to a Sustainable Low Carbon and Climate Resilient Economy” to push the case for Australian fossil fuels. (See Renew Economy: Paris, COP21: Australia digs in on fossil fuels, sees coal as solution to hunger)

“Technological breakthroughs and innovation will drive much of the change that will underpin the transition to a low-carbon economy.

“That means coal-fired power generation is here to stay,” she said.

“It is a fact that energy is a mainstay of our respective countries’ export markets and underpins economic growth.” reported the ABC.

So it is the same line from Abbott that coal is good for humanity, when air pollution is choking the cities of China and India, causing huge health problems and a major cause of deaths.

Her comments were highly insensitive in timing, being made during and at the Climate conference where most countries are trying to phase out coal mining and coal power stations.

In Argentina it is the last day in power for the current government, and they are rushing to approve a law that declares coal production in the national interest, paving the way for the nationalisation of coal production through state-owned companies. It is outrageous that a country like Argentina that could power the entire continent with wind energy (no-kidding) is trying to invest in Coal.

A second place fossil of the day award went to Canada, New Zealand and the USA (not their first time for being taken to task on this issue) for insisting on an explicit exclusion of compensation and liability in the loss and damage negotiations. Vulnerable developing countries already decided not to formally push for compensation in October.

According to the Climate Action Network statement, “The behaviour of our fossil winners has unnecessarily distracted from a constructive discussion on how to anchor loss and damage in the Paris Agreement allowing the global response to evolve over time, as the problem requires, and without being able to solve the compensation issue here anyway. This is not acceptable given the very legitimate demands of vulnerable countries not to be left alone to cope with the loss and damage they are not responsible for.

Time is ticking for the Paris Agreement

Time is ticking and the inevitable brinkmanship of negotiations are well under way in the final days. But what is becoming clear is that an agreement is in the offing. We know this agreement won’t be enough to even get us below the 2 degree level, but it will be a base to ratchet up carbon reduction.

Civil society groups have had a couple of major events to persuade delegates with what is needed. On Tuesday at a civil society street theatre event here in the UN blue zone three ministers stepped up at the end of the event: Costa Rica, Philippines and Bangladesh, to symbolically start going down the 1.5C path, and decarbonize by 2050. It showed awesome leadership by the Climate Vulnerable Forum who are basically shaming the developed nations by walking the talk, the moral choice to make.

Sharan Burrow, General Secretary of the International Trade Union Confederation and a former President of the Australian Council of Trade Unions spoke at the event.

“We need that long term goal, and to make sure that long term goal is possible, we need a review mechanism with teeth, a review of the INDCs before 2020 and a five year cycle. It is that simple. 1.5 to stay alive. There are no jobs on a dead planet. We have support today for these ministers. But we say to all ministers: This is about people, their futures, and the planet that is sustainable. So do your job.” Burrow said.

The hour before the Fossil of the Day award ceremony civil society groups occupied the area among the animal sculptures outside the main plenary halls to put pressure on ministers. It was a peaceful sit-in, hastily organised with the UNFCCC secretariat and security. There was chanting, there was singing, and a few speeches through mic-check. Whatever agreement the ministers finally approve, Paris is just a pivot point. Change is already occurring.

Our fight in Australia is even greater with continuing approval of new coal mines, and the very low pre 2020 targets that Turnbull has already announced we will exceed, while not committing to increasing those targets. Our post 2020 targets are also near the bottom of comparable international action and ranks as a a climate laggard.

A recent analysis of climate action ranked Australia third-last in climate change performance of 58 countries according to the Guardian.

But there is a revolution happening with renewables, and the rollout of battery technology set to disrupt the centralised power generation model. This is being lead by ordinary electricity consumers, with over 1.4 million solar PV rooftops already. Wind farm generation costs have also fallen making wind more economical.

The divestment movement is also growing rapidly. 350.org announced at the Paris conference that Divestment Commitments have passed the $3.4 trillion Mark.

Increasingly, our cities and towns with local government leadership are stepping up to boost renewables, plans to reduce emissions and go net zero carbon, and increase sustainability. This is happening not only in Australia but globally as shown by the declaration in Paris by 1000 Mayors to go 100 percent renewable by 2050.

While Malcolm Turnbull’s Government still has a policy of closing the Australian Renewable Energy Agency and the Clean Energy Finance Corporation, there is a revolution going on internationally in the development and rollout of renewables.

The transition will be more rapid and smooth with policy coherence at all three levels of government, but there is so much momentum that short sighted obstructive policies can only slow this change.

Federal Government policy is restricting transition to a renewables future that will happen anyway. It just provides more profit in the interim to the benefit of the coal mine and fossil fuel owners and operators who are maximising output from their polluting and outdated plant while they can, at the expense of us all.