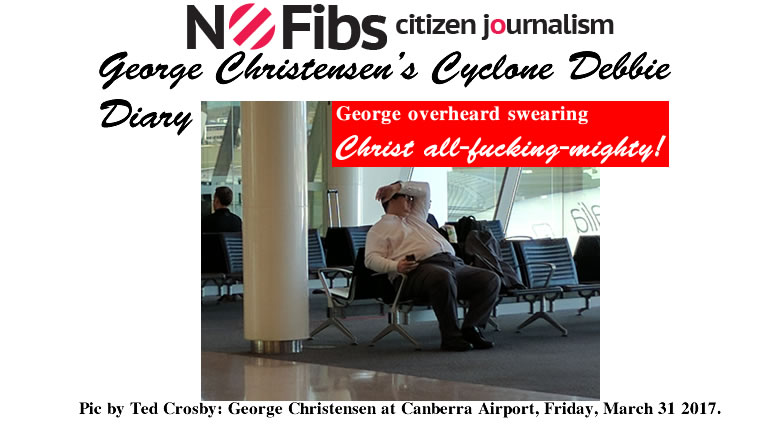 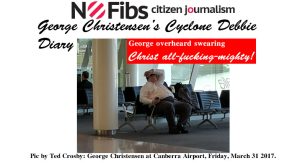 Queensland Liberal National Party MP for Dawson, George Christensen, has had a rough week. Captured by filmmaker Ted Crosby at Canberra airport on Friday afternoon he was heard to exclaim, “Christ all-fucking-mighty!” as he left the Virgin lounge.

With Tropical Cyclone Debbie destroying his electorate of Dawson, the events leading up to this explosive moment may give us an insight into the former National Whip. The man from Mackay, the caner of the canefields, a man called George.

George left on the final flight before Mackay Airport closed. AAP’s Daniel McCulloch wrote that, “Mr Christensen, who left on the last flight in or out of Mackay to get to Canberra for parliament, warned the weather could change on a dime right now and urged people to stay put.”

Mackay Airport posted a statement online confirming the closure and that “stage 4 of its Cyclone Plan” had been activated.

Nearly half a metre of rain recorded in Strathdickie (near Proserpine) in last 24 hours. 194mm of that falling in ONE HOUR (@Amy_Greenbank) pic.twitter.com/xecKdc3jk4

George copped a bit of flak for being safe in Canberra.

Given @GChristensenMP ended up on last flight out of Mackay, will be interesting to see if decision to advocate from Canberra bothers locals https://t.co/U2HtK394K4

Unlike his constituents, George explained that he was at parliament house so that he had access to ministers, phones and power.

Christensen in Cbr during #CycloneDebbie so he's in earshot of ministers to get help – story from AAP's @dlmcculloch https://t.co/wnTddLjQW9

"Contact me, text me, pick up the phone and I'll be there and able to walk into a minister's office and get something done." @GChristensenMP https://t.co/mVglp4yZvT

A flustered George reverted to attack mode and played the “North Queenslander” card.

George also dismissed the presence of a neighbouring, unnamed Labor MP who remained with her electorate. (This was most likely Cathy O’Toole, MP for Herbert. Her electorate encapsulates the Townsville area).

Cathy O’Toole was later quoted by Bettina Warburton in Friday’s local Townsville Bulletin on the repair process, “Fears North Queensland tradies could be left out of cyclone rebuild”.

Herbert MP Cathy O’Toole said she would lobby to ensure insurance claim work was carried out by local tradies.

“It would be such a slap in the face after such a horrific weather event to be told that insurance companies will hire a workforce from down south not from North Queensland,” she said. “I will ensure we get as many local job opportunities to carry out the rebuild.”

Safe inside the Canberra shelter, George asked Prime Minister Malcolm Turnbull to update the House on, “the government’s preparations for and planned response to Tropical Cyclone Debbie’s impact upon my constituency of Dawson and across North Queensland?” 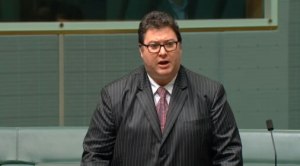 With the question satisfied, George vowed to return to Mackay.

Despite the canefields being flattened, George was happy to re-post an image of himself and boast about the sugar code of conduct.

On the ground, “Disaster” George offered some advice to people frustrated by the loss of essential services.

George appeared briefly in a video posted by the PM.

In Bowen today with @billshortenmp & @GChristensenMP.
We are united behind the people of North Queensland as they recover from this storm. pic.twitter.com/TXtNLPpez2

George also appeared in the background as the PM and OL mucked out a building. George also pledged to return tomorrow. 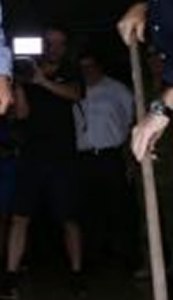 Back in Canberra that afternoon, George asked a question about the sugar industry.

“Christ all-fucking-mighty!” George was heard to thunder as he stormed out of the Virgin lounge. Something had caused him to blow his top on Friday afternoon and he was forced to sit with the commoners awaiting his flight home.

I DID take a while trying to fit him AND the virgin lounge in… But he was too far away. Here's a more flattering pic: "woe is George" pic.twitter.com/EU9kRWcbZR

George later denied he set foot in the lounge and inferred his outburst was due to “Cyclone heartache”.

George spoke briefly about his trip with the PM to the recovery zone on Thursday and provided a helpful link to a Queensland Government website.

George re-posted a resident’s power coming back on.

George continues to help out with Facebook posts but warns that due to the high volume of messages he simply cannot answer all of his fans.

George has been out and about supervising SES crews.

“Journalist” George has also spent his Saturday penning an opinion piece for the Daily Mercury.

George makes sure he’s seen out and about with the Defence Minister Marise Payne.

George thinks grants will be available any day now.

George is leading the way.

George keeping his Facebook fans happy with appearances in other people’s photos.

Disaster recovery doesn’t mean you can’t give the other side and South Australia a good kick. George claims that Queensland’s electricity grid is powerful. Its coal-fired power stations are so powerful they don’t even need transmission towers.

George now claims that people are being denied disaster relief funding and proposes suspending foreign aid to countries like Afghanistan.

Nationals leader Barnaby Joyce said the two backbenchers were just looking out for their communities.

“We will listen to their views, obviously at a national level we have to balance a whole myriad of views both domestic and international, and we try to make sure that we do the best job,” he said at a press conference alongside Mr Christensen.

George works Barnaby Joyce, Tim Nicholls and a member of the defence forces into a photo op.

George goes before the cameras calling for foreign aid suspension.

Meanwhile, Queensland Premier Annastacia Palaszczuk says she wants the next round of  federal grants approved by Monday. Funds of up to $25,000 for primary producers.