Give PM Julia Gillard credit where credit is due 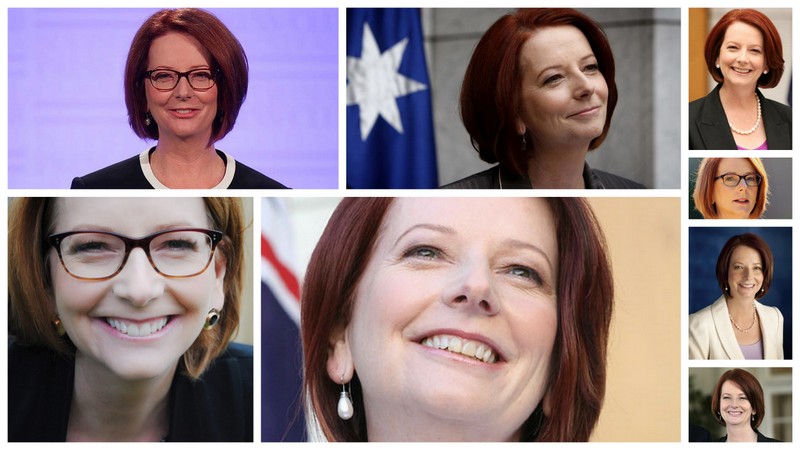 Full and half page advertisements were taken out today in mainstream print media publications (The Age, The Sydney Morning Herald, the Herald Sun, 1/2 page in The Australian) by the Victorian Women’s Trust to put on record the achievements of the Gillard Government in the face of unprecedented opposition.

The VWT, a Melbourne-based 28 year-old philanthropic feminist organisation, has taken this significant step to put on the record what many women and men have witnessed over the last few years – watching in horror how the minority government’s achievements were delegitimised while Australia’s first female Prime Minister – who was governing successfully – was ‘torn down’ by various forces, including:

(i) an overly hostile Opposition,
(ii) destabilising and treacherous camps within the ALP prepared to bring down their own government,
(iii) a sustained, antagonistic mainstream media, and
(iv) a campaign of sexist abuse across social media and public forums.

The advertisement follows the work of the VWT in publishing ‘A Switch in Time’ in September 2012 – which documented the overwhelming sexist vitriol launched at the PM and the total lack of respect shown towards democratic principles and the Office of the Prime Minister.

Through feedback from this distribution of 13,000 copies nationally and more than 20,000 downloads via the internet we know that many women and men across Australia share our concerns.

Already, in the week since last Wednesday’s challenge, we continue to witness a ‘talking down’ of Julia Gillard and her minority government’s record of achievements.

With this in mind, we sought the financial help of a handful of women donors who shared our concerns and generously provided the necessary funds – around $100,000 in total for the four publications, without the privilege of tax-deductibility.

This advertisement was written by me on behalf of the Board and the staff of the Victorian Women’s Trust, and I have given No Fibs permission to republish.

We have all witnessed something extraordinary in Australian politics over the past three years.

The 43rd parliament came to a close with the removal of Julia Gillard as the nation’s first female Prime Minister: the first woman ever to hold the position after one hundred and ten years of federal political leadership that saw 26 male Prime Ministers elevated to the highest office.

The frenzy of the forthcoming federal election campaign will change the nation’s focus. Before it’s too late, we want to pay public tribute to those who made this period of democratic minority government a successful one – against the odds.

The federal election of 2010 delivered a hung parliament. Prime Minister Gillard successfully negotiated and formed a minority government, the fourteenth in our history. This coalition of the ALP, Independents and the Greens, opted to provide careful, thoughtful, stable government for a full term, so that our national government could get on with the business of governing in the national interest. And it did just that.

However, from the outset, and despite its democratic legitimacy, the Gillard-led minority government sparked an unheralded series of hostile reactions from different quarters across the country.

An Opposition Leader, stung by being denied what he saw as his due, proceeded to launch a ‘seek and destroy’ mission centred on opportunistic appeals to people’s prejudices and fears. A deposed Prime Minister, stung from being removed so decisively by a Caucus that had lost faith in his capacity, spent the next three years currying allies on a parallel  treacherous ‘seek and destroy’ mission – with Prime Minister Gillard squarely in his sights.

By and large, the mainstream media fuelled these separate but powerful agendas by refusing to accept the legitimacy of the minority government with Julia Gillard at the helm. Her many achievements went largely unproclaimed while her mistakes were amplified – and continually referenced. Instead of delivering dispassionate reporting, seasoned journalists and broadcasters became players in the game.

Low showing in opinion polls was attributed to her poor communication and her government’s performance, without factoring in the damaging impact of the on-going duplicity within her own party. The very day in March this year that Prime Minister Gillard delivered a majestic Sorry speech on forced adoptions, a speech that belongs to the store of great national oratory, she had to contend with yet another destabilising leadership meeting at which her opponent failed to declare himself.

It has been a fraught political environment and we remain baffled by several of the Gillard government’s policies – on immigration and asylum seekers, reducing economic support for single parents and the Prime Minister’s position on same–sex marriage. By and large, however, she has displayed an enormous capacity and style of effective leadership rarely seen in parliamentary leaders across the political spectrum. She oversaw the introduction of a raft of impressive and far-reaching legislation, showing high-order negotiation skill, sharp intelligence and a great ability to command strategy and detail across complex issues.

Much of this legislation is nation-building, addressing our common future as Australians – the introduction of a carbon price, the roll out of a National Broadband Network, The Murray-Darling Basin Plan, a ground-breaking National Disability Insurance Scheme, a much more equitable model for funding primary and secondary education, a national paid parental leave scheme, and the establishment of the Royal Commission into Child Sexual Abuse. There were many more reforms. Achievements in foreign policy, including Prime Minister Gillard negotiating the basis for future high level discussions with China, were notable and more far-reaching than those of her recent predecessors.

On her watch as the nation’s Prime Minister, our growing economy has been the envy of the world – low unemployment, low interest rates, low inflation and triple-A credit ratings.

We salute former Prime Minister Julia Gillard for getting on with the business of governing for us, the people; for the skilful negotiation, resolve and the leadership required to maintain the confidence of the Lower House; for steering the government through a full term; for enabling close to 500 pieces of legislation to be passed; for introducing significant and visionary reforms that will deliver great benefit to the Australian people in the time to come; and for remaining strong and poised when everything bar the kitchen sink was thrown at her.

We pay tribute to those male and female colleagues who worked with her on the nation’s behalf, respected her capacity and gave her the loyalty she deserved.

We pay tribute to retiring Independents Tony Windsor and Rob Oakeshott for their true independence, their courage and hard work in upholding democratic values; and for enduring with dignity, the threatening abuse aimed at them, their partners and staff.

The success of this minority government has come at a significant cost.

The past three years have led to a great loss of civility and common decency, a poisonous political discourse and a downturn in respect for our leaders. We now have a climate in which people willingly and disrespectfully attack one another in anonymous and often vitriolic commentary that is no substitute for mature democratic debate. There is a jaded cynicism and a sense of deep despair and powerlessness across much of the community.

With men now back in their perceived ‘rightful place’ as political leaders of both the government and Opposition there will be little gendered attack in political circles. But the seams of aggressive contempt and sexist abuse that lay beneath everyday life and which surfaced with Julia Gillard’s elevation as Prime Minister, have not gone away.

We have just lost our very first woman Prime Minister – a woman with a great sense of purpose and skill, a true reformer. Julia Gillard’s final observation, in a speech of supreme grace, was that her experience as the country’s first female Prime Minister will make it easier for the next woman, and the next and the next. If this proves to be the case, she will deserve further recognition and gratitude.

Smoother passage for the generations of younger women coming through the ranks will only come about with more commitment – changes within political parties themselves, a greater focus on the benefits to be gained from gender equality, cultural change that reduces violent abuse and sexism and social action at many levels of our society.

The truly ugly aspect of our national life revealed by the past three years should give cause for us all to reflect on what else is required to restore and maintain respect, civility, common decency and a fair go for women – in our society and in our democratic politics.

Mary Crooks AO & Diana Batzias
Executive Director & Convenor
on behalf of the Board and Staff of Victorian Women’s Trust
www.vwt.org.au 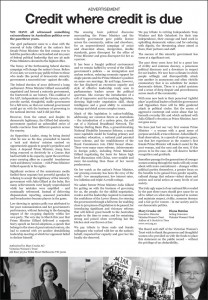 The Board and staff of the Victorian Women’s Trust wish to thank the generous and thoughtful women who provided us with the funds to place this statement on the public record – without the privilege of tax deductibility.

Sexism: I’ve had a gutful