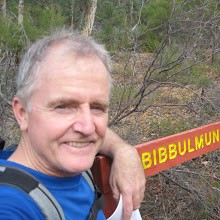 Peter has recently sold his data storage business. He he considers himself a business manager but is currently working from home – just enough to fund his main passion which is community involvement, He is currently coaching a local sports team, was a South Perth City Councillor for 4 years and has a personal blog about the South Perth area in which he blogs about local community issues and events.

As a child Peter was bought up around robust political discussion in his family. He is a descendant of Sir Philip Fysh, a Premier of Tasmania and a minister in the first Commonwealth government.  His family hold wide ranging political views from a sister who is a teacher’s union rep in Qld to a brother who is a Pauline Hanson supporter.

When asked why he had chosen the Greens as his political party he noted that after leaving University he worked for refugee programs in Africa for 13 years and when returning to Australia wanted to make a difference in the Community in which he lived. He felt the Greens values aligned with his values on communities and people.

Peter sees the voters in Tangney as being in roughly 3 groups.

This extends from Canning Vale along to the new housing build on wetlands at Southern River. These young families are highly mortgaged and there has been a lot of job losses and a high level of domestic violence.

This group of voters are concerned about education, mainly for their young families, and this area is building schools as fast as they can to keep up with the needs.

Their second concern is for public transport, of which there is none or very little.

Their third concern is for their perceived view of high crime, but in fact, according to statistics the crime rate per person is down, except for domestic violence.

This area consists of Willetton, Leeming and Bull Creek, where there are High levels of Indian, Sri Lankan and Chinese emigrants who have mainly moved to these areas due to education needs (Rossmoyne and Willetton High schools are the top 2 public high schools in the state. Those houses which offer access to these schools command a premium on the real estate market. Peter says that at the booths these voters have a clear idea how they are voting, and having got here ‘first’ they have little compassion for those trying to come after them.

These wealthy voters are concerned about asset protection and crime and worried about how things may affect their land values. Social housing worries them due to decreases in land prices and fear of crime.

They are also concerned with health care and aged care in later life.

What Peter sees as the issues affecting Tangney

He wants to see the trucks taken off the highways and put on rail from the country to the port of Fremantle. Also he doesn’t want to see Roe highway extended from where it is now through Bibra Lake wetlands.

A major issue for Tangney, as it is for everywhere, is climate change, especially to those leaving in the wetlands of southern rover and those living on riverside suburbs. An example of everyday impact is the mosquito numbers and disease associated with them.

Public transport needs major improvement in the eastern end of Tangney where lifestyles are built around car use, and the further out people live the more money and time is spent having and using cars.

He doesn’t want these new suburbs to become dormitory suburbs and would prefer to see development with thoughts to communities and making more commerce close by. The NBN should be a great help and providing choice with this, he believes

His passion is for more connection and more community to see more children involved in community activities and the provision for these areas to allow for this.

I asked Peter what is the point in running and campaigning in a safe seat. He nominated 2 points:

When asked specifically about Rudd’s new asylum policy of sending people to PNG he commented that Kevin Rudd was stealing Adolf Hitler’s policies!

I also asked on his thoughts on the Carbon price vs. ETS. He thinks the carbon price is more effective but at end of the day the economics of it is not the point – the objective is to emit less Greenhouse gases.

I asked who he thought would win the election and he said no idea; he just wants to do enough to make a difference in his community.

Tomorrow’s interview is with Dr Dennis Jensen, the sitting member for Tangney.