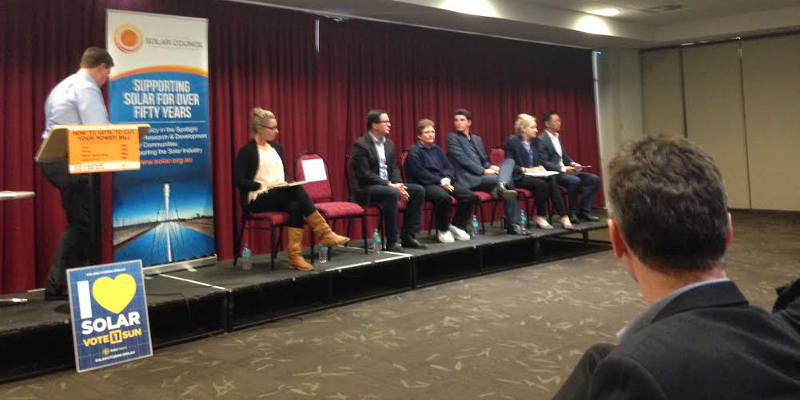 The Australian Solar Council held a Save Solar Forum at Mandurah Bowling and Recreation Club on Sunday. As the national voice of the solar industry they have invested more than $60,000 into the Canning by-election in an effort to save jobs and cut power bills for the people of Canning.

The Solar Council says that because the Federal Government is targeting the solar industry by slashing the Renewable Energy Target (RET) they will support any political party with a good solar policy.

A number of federal politicians were invited but did not attend: 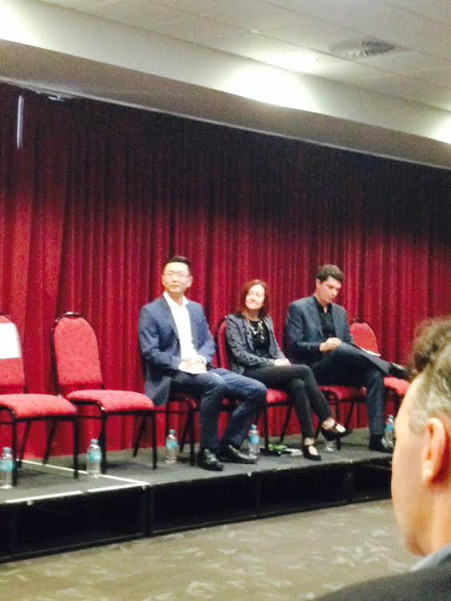 Federal politicians who did attend: 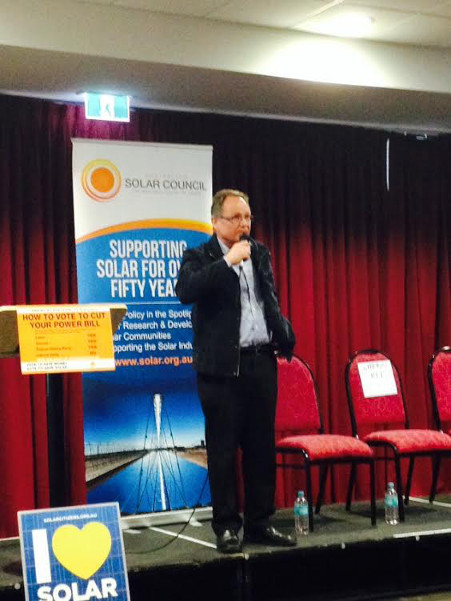 All the Canning candidates were invited to attend the forum, with only Vanessa Rauland (Grn) (@vanessarauland), Matt Keogh (ALP) (@mattkeogh) and Angela Smith (SPP) (@AngelaSmithWA) in attendance. 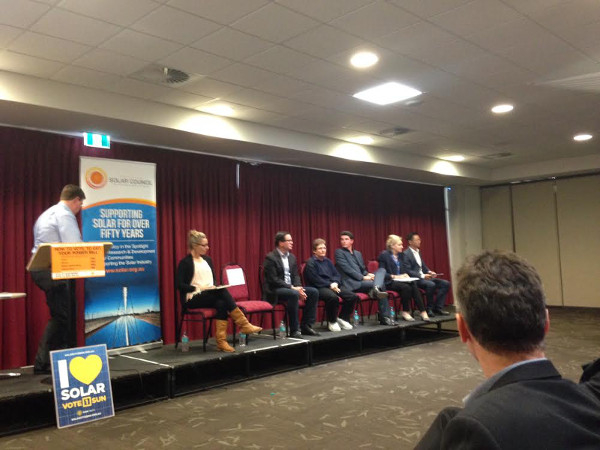 David Templeman said that Canning must send a clear message to Canberra about what the people of Canning feel about renewable energy, it is a very important issue. Canning has one of the highest uptakes of solar energy in Australia. 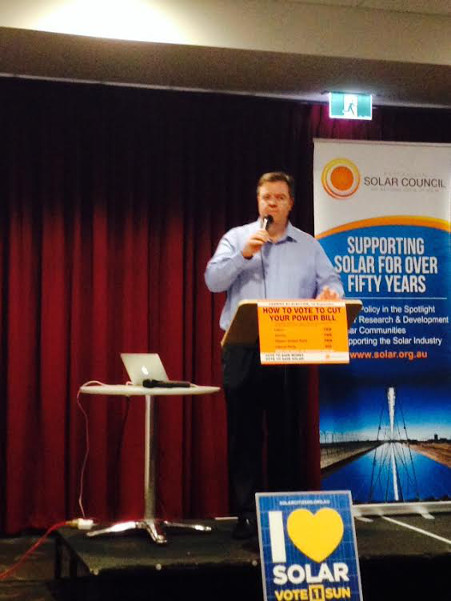 The CEO of the Australian Solar Council John Grimes  opened the forum:

The Save Solar campaign began in Western Australia eighteen months ago during the WA senate by-election, it was clear even then that the Abbott government had the knives out for renewable energy, solar in-particular was in their sights.

Everyone knows that the one thing you can do to slash your power bills is to install solar. Governments should be making it easier to slash power bills not more difficult.

That’s why we were so disappointed with the Abbott government’s approach. After four federal elections where we had bipartisan support for good solar policy all of that was smashed. So far we have held nine Save Solar community forums across the country, we’ve advertised on television and in newspapers, we’ve run a strong media campaign. We’ve mobilised tens of thousands of people and shared our message with millions more.

Everywhere we go around Australia people are really angry with the Prime Minister’s anti renewable energy agenda. The Prime Minister stands for the profits of the big power companies and against the interests of the community.

We have a Prime Minister shackled to the past with no positive vision for the Future.

In fact half the homes in Canning have solar and the other half want to get solar and Tony Abbott is attacking them all.

Before the last election the Abbott government told us, they promised, they would be big renewable energy supporters. They committed Australia to a solar sunrise, an additional one million solar roofs. Then he was elected: since that day Tony Abbott has been completely focused on rolling back all renewable energy and climate related policies.

But you know what, in that process Australia has seen into Tony Abbot’s soul and friends we have seen for ourselves it’s covered in coal dust.

The people of Australia are the biggest losers, solar slashes peoples power bills, it creates jobs, it funds big infrastructure projects in rural and regional Australia. In fact we are at the crest of a great wave a transformation to a clean energy future.

For the first time technology is literally putting power into the hands of the people. From a dumb one way 1950s grid to the smart grid of the future. A grid that is driven by smart data making complex decisions in real time. Clean distributed solar energy, battery storage, smart energy management systems.

As this future starts to emerge, it’s already clear solar won. The solar transformation is unstoppable, sure the vested interests can frustrate it, they can slow it down but they can’t stop it.

We make energy where we use it. The Sun is everywhere.

That’s why the people of Australia have collectively built a four gigawatt solar people’s power plant, a power plant that was two thirds funded by private capital with no risk to government, that’s equivalent to four really big coal fired power stations not built.

By 2050 solar and wind will dominate global energy systems. It is a simple matter of economics and we don’t have to wait until 2050 to see the results.

Over the next ten years the people of Australia are going to build a new renewable energy Snowy Mountain Hydro scheme, only much bigger. A massive transformation of the energy sector that will lead to an abundant, efficient and best of all a clean energy future.

In 2014 over $300b scoured the globe looking for renewable energy investments, and in Tony Abbott’s Australia, Abbott had hung up the sign: NOT OPEN FOR BUSINESS.

So none of it came here. In the long term Australia does have a huge comparative advantage. Here in Western Australia you get 4 times more sunlight per square meter than they do in Germany, think about that.

We have the best solar brains in the world in Australia, in fact it’s not a stretch to say that for most of the technology we invented solar.

We have a public hungry for control, sick and tired of not having a say, of being the bunny that just pays the power bill whatever it happens to be and getting that bill shock every quarter.

Australia is witnessing the biggest transformational business opportunity that Australia has ever seen. So this is really fantastic news.

It’s about jobs and economic development, infrastructure projects, so pause once in awhile and smile.

See Prime Minister Tony Abbott for what he is, standing with his red speedos on the beach commanding the tide not to come in.