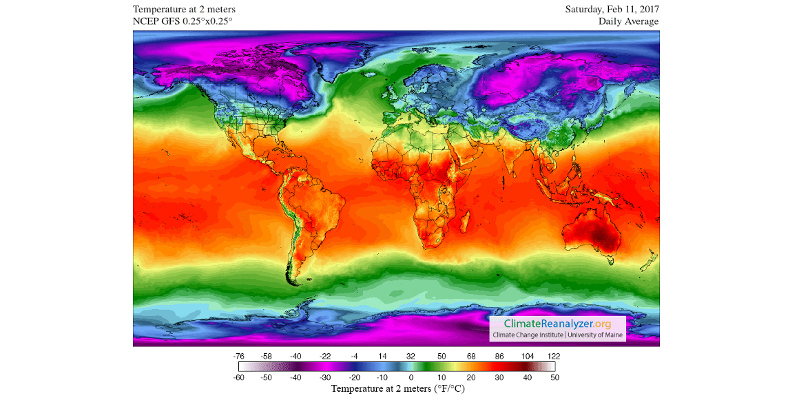 Australia is currently the hottest place on the planet with the heatwave in SE Australia according to the Climate Reanalyzer site for Saturday 11 February. And last year (2016) was the hottest year on the planet in recorded history, following two previous years which also set the record.

As heat temperature records tumbled in south east Australia in the heatwave, catastrophic fireweather conditions were being experienced on Sunday over a wide region from Port Stephens in the Hunter Region, Tablelands and the Central West region of New South Wales. These conditions are categorized as a greater danger than the Victorian Black Saturday bushfires of 2009 which killed 173 people directly in the bushfires and 374 excess deaths due to the heatwave.

We have an energy crisis with load shedding ocurring in South Australia on Wednesday (that needn’t have occurred), and load shedding in NSW on Friday and Saturday with the Tomago Aluminium plant being ordered to curtail production and energy use.

But what you will find largely absent in the media and comments by politicians on the heatwave is any reference to climate change which is an essential driving factor of more intense heatwave conditions and catastrophic fireweather.

The mining and burning of coal is a large contributor to greenhouse gas emissions and needs to be phased out in an orderly way to meet our international commitments on climate change. The only ‘but’ would be if carbon capture and storage (CCS) was developed at scale and at reasonable cost, and I don’t see enough research and investment to make this happen in a realistic timeframe.

So the Liberal Party are causing a clean coal controversy and blaming renewables, when AEMO and the energy market needs a thorough overhaul to re-prioritise production to meet consumer demand and social requirements rather than business profits. Just look at AEMO’s governance bias for a start.

The Transition road may be rough at times, but we really do need to move to 100 per cent renewables. Prior changes such as the transition from horse and buggy transport to automobiles – about 13 years – at the start of the twentieth century, shows that transition happens relatively quickly. State renewables targets are realistic and already driving the energy transition we need.

Is it so hard to come up with a bipartisan national energy plan?

“The conditions for Sunday are the worst possible conditions when it comes to fire ratings. They are catastrophic, they are labelled catastrophic for a reason, … and to put it simply they are off the old conventional scale. We used to stop our fire danger ratings at 100, but we are talking about indices up over 150, 160 tomorrow which is quite extraordinary. We haven’t seen this in NSW to this extent, ever.”

Big words, and an emphasis that the fire conditions are worse than Victoria’s Black Saturday conditions of 2009.

Dominic Morgan from the NSW Ambulance service highlighted that in the previous 24 hours there have been a number of near drownings, and 20 children or animals rescued from cars. This has necessitated increased activity of the ambulance service, but it is currently responding well. He emphasised the need to take care of elderly and ensure they are in a cool or well ventilated place. And for everyone to keep up the hydration.

“Clinically diagnosed heat stroke is a potentially life threatening condition. It can be characterised by severe dehydration, delirium, persistently high temperatures, unconsciousness and even fitting.”

Underscoring his message is the fact that extreme heat is a silent killer responsible for more deaths than any other natural cause, including bushfires. I raised in October 2014: Are we mitigating the health risk of worsening heatwaves due to climate change?

By mid Saturday several records had been broken, according to Steven Elliott of the Bureau of Meteorology. These included:

An update on temperatures and weather conditions from the BOM on Sunday afternoon:

.@BOM_au says February temperature records broken in east coast #heatwave. How hot's it been where you are?https://t.co/fQUxsgXjQO pic.twitter.com/HazlUyA6fC

Hot temperatures continued today, smashing records around the state as people struggle to stay out of the heat. @TessaHardy9 #9News pic.twitter.com/c9Usxtz6zo

For Queensland’s electricity generation, there were two market calls for extra power at 1600, and at 1700.

In Singleton 45C+ extreme heat killed hundreds of grey-headed flying foxes. These creatures are very susceptible to extreme heat and start dieing on mass, literally falling out of their trees, when temperatures exceed 41-42C. (See Welbergenet al 2008: Climate change and the effects of temperature extremes on Australian flying-foxes). In Canberra Heat-affected flying foxes were hosed down by volunteers to avoid mass deaths.

My storify on Sunday: Catastrophic fireweather amid record breaking Aussie #heatwave and below:

Thanks to Sarah Perkin-Kirkpatrick (Mrs Heatwave) whose tweet alerting me to the Climate Reanalyzer map.