#Homophobia for the holidays: @burgewords on creating #LGBT characters

It would surprise most people to see what a strong thread of prejudice runs through families.

Spending time with family over Christmas and New Year can be a challenge for anyone, but journalist and author Michael Burge explains how his first collection of short stories grew in the fertile ground of familial homophobia.

WHEN I began writing fiction, I didn’t understand at first that the theme I was really exploring was homophobia.

After years of churning out scripts in the corporate world, which was not sustaining me in any kind of career, I decided to turn my hand to short stories. Over the course of about ten weeks in late 2009, I started writing fiction like a demon, and the stories took shape with a range of LGBTI (lesbian, gay, bisexual, transgender, intersex) protagonists, the likes of which I never imagined I could create.

As a reader, I had rarely encountered gay characters. I wanted to read a lot more of them, but part of me realised they weren’t really to be found widely in mainstream literature. I needed to create them myself.

About halfway through writing the cycle of stories I recently published as Closet His, Closet Hers I took a step back from the writing process to analyse the world of my characters. What startled me was seeing the range of Australian families I had created, and the LGBTI who inhabited them.

The title story is an account of a deeply-closeted gay man who marries a woman he went to school with, told from his perspective and from hers. To make that story credible, I needed to create two families with a past firmly rooted in the Australian suburbs, into which the main character’s homosexuality arrives out of nowhere.

While there’s not much overt homophobia in this story, the potential for it hangs on every plot point. It creates a pathway for the young man, who first realises his homosexuality at school Bible camp; but it also carves out the future of the young woman he marries, whose sexual world is no less restricted than his.

I’ve had my homophobia ‘radar’ set on high ever since I was almost completely disenfranchised after my partner died, and I believe it would surprise most people to see what a strong thread of prejudice runs through families, creating expectations for LGBTI and disappointments for their loved ones, who have not traditionally been prepared for homosexuality in their ranks.

But times are changing. In the 1990s, the media picked up on the ‘gay gene’ theory which was debunked by many as scientific fantasy and championed by others as proof that sexual orientation is not a choice. More than twenty years on, I have been part of many family discussions, particularly when multiple generations are gathered for Christmas, about how prevalent homosexuality is within the same family trees. Although the very idea of a gay gene offends people on both sides of the debate, these talks go a long way towards easing the feeling many parents have about what they fear was ‘bad parenting’ resulting in them ‘turning’ their children gay.

We’ve also seen great change in the Australian community, to the point that polling reveals a massive majority for marriage equality in this country.

I’d like to believe this means there is less homophobia within families, but I am not so sure. Homophobia takes many forms, not just overt violence against LGBTI. Much of it can remain hidden, taking the form of ridicule and exclusion. At its worst, ‘invisible’ homophobia leaves LGBTI out of processes that are routinely granted to our straight siblings and cousins.

I have a friend who recently came out to her family. She’s in a loving, committed relationship, but her partner is not welcome at the family Christmas event because her parents have a problem with her sexuality. LGBTI in this position are forced to choose between loved ones, meaning someone is always going to lose in the end. It’s this sense of isolation I have worked to express in Closet His, Closet Hers.

I hope I have captured the blatancy of homophobia, but also its subtlety. 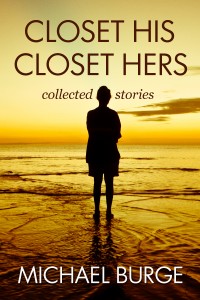 Many parents don’t really have a problem with their kids being LGBTI as such, but their homophobia appears when their sons and daughters manifest relationships.

The stories in Closet His, Closet Hers illustrate this kind of prejudice. All the Worst Jobs is the story of a lesbian care worker, Jessie, who is outed by the older woman she showers every morning. The risk for Jessie immediately increases at this point, since she relies on the income yet walks the knife edge with her client, who seems to hold all the cards.

Multi-generational relationships are portrayed in They’re Curing All Sorts of Things Now, in which a grandmother’s advancing dementia is played out over the occasion her grandson comes out to her.

One of the most poignant stories, for me, is Dirty Nurse. Many years ago, I was told about an act of great heroism shown to the LGBTI community during the unfolding HIV-AIDS crisis in the 1980s, and I was keen to write about it, but I wanted to add to the tension by imagining how things would play out if this career nurse was gay herself.

Most of the stories in Closet His, Closet Hers are set slightly in the past, and while I acknowledge that things are very different for many LGBTI growing up now, I think it’s relevant to look back and record the emotional journeys taken by my generation.

Ours was the era during which homosexuality was decriminalised, and when HIV-AIDS ripped a hole through our communities and families. They were profoundly frightening times for young LGBTI and led to many of us, myself included, coming out rather late compared to young people today.

I hope readers can take a level of comfort from my stories, in knowing that times have changed, and that the work inspires them to make different choices when it comes to the LGBTI in their midst.

I don’t imagine many gay family members want special treatment at family gatherings such as Christmas lunch, but nor would we want to be made to feel somehow different, which occurs in a couple of the scenes I portray in Closet His, Closet Hers.

I hope I have captured the blatancy of homophobia, but also its subtlety. It can be a very discreet phenomenon.

Michael Burge is an Australian journalist. His debut memoir ‘Questionable Deeds: Making a stand for equal love’ became an Amazon bestseller. Michael’s books are available via his online bookshop and in paperback at The Bookshop Darlinghurst (Sydney), Hares & Hyenas (Melbourne) and Avid Reader (Brisbane).