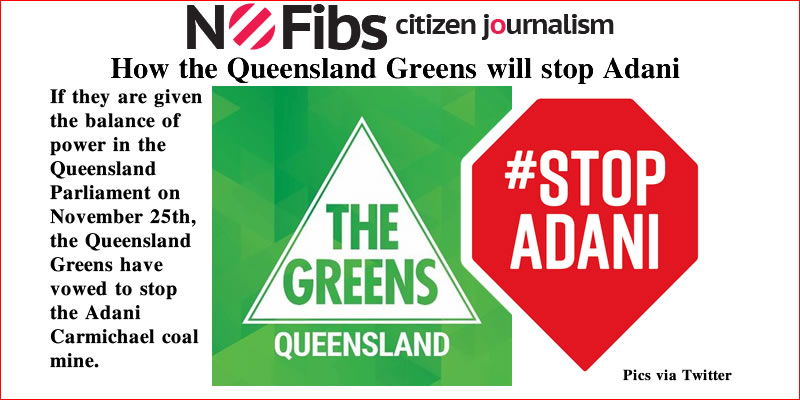 A rolling blog exploring the specific legislative and/or constitutional steps the Queensland Greens will use to stop the Adani Carmichael coal mine should they win the balance of power in the Queensland election. Check back for updates. 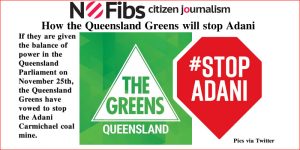 Questions for the Queensland Greens.

Answers from the Queensland Greens.

The Premier has called an extraordinary press conference to attack the LNP over rumours of a smear campaign. #TenNews @tegangeorge pic.twitter.com/C1NJHzg3oO

.@AnnastaciaMP says her partner never told her he was working on Adani Naif app. LNP "spreading rumours" to suggest conflict of interest

.@TimNichollsMP and Queensland LNP must now step up. Match this pledge to veto the NAIF loan or face the electoral consequences. #StopAdani

As I said in parl NAIF as dodgy as Lehman Bro. Welcome announcement by @AnnastaciaMP to veto public funding #auspol https://t.co/NLfpcpxmFV

.@AnnastaciaMP now has a conflict of interest with the economic development of QLD. Her position is untenable

Answers from the Queensland Greens.

Candidate for the seat of South Brisbane Amy MacMahon has responded with a five point plan to stop Adani legislatively.

The Greens will stop Adani by 1) Vetoing the $1bn loan to Adani under the federal NAIF Act, 2) Scraping the $300m State based royalty tax break, 3) Cancel Adani's license to operate in Qld based on their shocking OS track record under Qld law 1/2

The NAIF Act could only be amended in the Federal Parliament, Northern Australia Infrastructure Facility Act 2016.

The Deputy Editor of the Townsville Bulletin Damien Tomlinson believes the Greens might be dreaming. He also published an editorial here, ‘Greenies gone wild’ over Adani.

Questions for the Queensland Greens.

An issue swirling in pre-election Queensland was the notion that the Queensland Government could veto the Federal Government’s Northern Australia Infrastructure Facility (NAIF) loan to the Adani Group to build the railway from Abbot Point to the Carmichael coal mine in the Galilee Basin. However, the states have a constitutional requirement to administer loans from the federal government.

In December 2016, the Greens called for the Queensland Government to stop the Adani loan. Lawyer and Greens candidate for Mount Coot-tha (now Maiwar) Michael Berkman said that a letter could be drafted by Queensland Premier Annastacia Palaszczuk to stop it. That letter was never generated and the issue has spilled into the 2017 election campaign.

Recently federal Greens MP Adam Bandt indicated in the House of Representatives that the strategy was to obtain the balance of power in the Queensland Parliament.

As the Queensland Greens have seized this as a key election policy, what steps would the Greens now undertake to veto the loan and stop Adani? So, if the Queensland Greens were given the balance of power on November 25th, what specific legislative and/or constitutional steps would they undertake to veto the NAIF loan? How would they ultimately go about stopping Adani?

@QldGreens, in a media statement, could you please detail the legislative or other steps to veto NAIF loan & stop Adani? #qldvotes #qldpol

A lot of people have entrusted the Greens to veto the NAIF loan & stop Adani. How specifically would this be achieved? #qldvotes https://t.co/1W2JzIYyel

How specifically would the NAIF loan be vetoed?

Shortly before the Queensland election was announced, a ReachTel poll commissioned by the Stop Adani Alliance was published in The Guardian asked respondents, ‘Should the Queensland government veto any $1bn federal loan to Adani?’

I asked economists, journalists and academics about the specific mechanism that would enable this to happen. Author of the piece at The Guardian, Michael Slezak responded in a roundabout way and pointed me to an article at The Conversation by Senior Lecturer in Law at the University of Tasmania Brendan Gogarty, Australia’s $1 billion loan to Adani is ripe for a High Court challenge. Gogarty confirmed the constitution requirement for federal funding to pass through the state. He plunges deep into the history of section 96 of the Australian Constitution and concludes that the veto plan would likely end up in the High Court. However, what issues for other Commonwealth funding might this raise if the High Court were to decide the state had a case?

I don't think so. It's a federal fund. State govt is committed to Adani isn't it? It would lose Townsville seats if it changes its mind

Professor Graeme Orr from the University of Queensland argues that the Queensland premier couldn’t constitutionally stop the federal loan.

Can't constitutionally stop the feds. It could revoke the go-ahead of course: but that would contradict its desire for mine ti proceed.

The way NAIF is set up requires the money to go via the states and they could therefore stop any transaction proceeding.

Dr Tim Seelig from the Queensland Conservation Council says the NAIF could only be stopped at the federal level.

@Qldaah Michael West confirmed to me that it has to be the Feds that kill the NAIF loan, following query on this: https://t.co/kjPNrPRyiV https://t.co/9QGdTQRGoR

Over a few Twitter chats, deputy editor of The Townsville Bulletin Damien Tomlinson, says the Adani mine is wanted by locals for the jobs it will bring. He also says the NAIF must be administered by the state.

So, the question for the Queensland Greens remains. Should they win the balance of power in the Queensland Parliament, what steps will they, in specific legislative and/or constitutional terms take to veto the NAIF loan to Adani and ultimately stop the Carmichael coal mine?