How to #GetElected despite the dirty tricks: @hula_grl #AusVotes book extract

In my experience, the major parties will pull out all stops to attack an independent candidate who they see as a genuine threat.

When the MP for Denison Andrew Wilkie was interviewed for a case study in my book Get Elected, he made this key observation about ‘dirty tricks campaigning’.

This national guide explains how to run a campaign and win election to public office at all levels (local, state and federal). It is a practical step-by-step guide that doesn’t shy away from the reality of politics including the negative aspects of campaigning.

In this extract, I discuss how a campaign can get dirty — and what candidates can do to prepare and respond to underhand tactics from the competition.

It is an unfortunate fact of campaigning that at some stage many candidates will have to respond to ‘dirty tricks’ from competitors. This is often the case when a major party is under threat of losing a seat they see is ‘rightfully theirs’ and when facing stiff competition from a candidate standing as an independent or with a smaller party.

Sometimes they will do (nearly) anything to maintain a winning edge. Unfortunately, with the big parties have a long history of successful campaigning and use their power, experience and funds to pull out all stops to ensure an independent challenger is smeared and attacked to win what they see as ‘their’ seat. Independent candidates need to be mindful of this reality.

Examples of dirty political tricks competitors will use against candidates:

What can a candidate do?

Negative campaigning is a reality for many independent candidates, especially in a tight competition. It’s better to have a plan to respond to these tactics than to be ambushed.

One approach to try to minimise the risk of underhand tactics is to encourage all competitors to sign a ‘pledge’ of positive campaigning that commits all in the campaign race to ethical and decent behaviour. The Ethics Centre has the Politicians’ Pledge, and it encourages all local, state and Federal candidates to sign up to the pledge to deliver better politics in Australia. It is a solid foundation for any campaign.

Be prepared and purchase your cyber real estate before you announce. In November 2017, on the day Kristina Keneally announced her candidature in the Bennelong by-election against Liberal John Alexander, the Liberal party bought up a Web domain in her name and used it to detail what they didn’t like about her and the Labor opposition.

Other prevention actions include clearing all old social media posts before announcing (to minimise those embarrassing photos) and put coreflute signs high up making it difficult for mischief makers to access (although never on trees; that’s against council by-laws).

Once on the campaign trail and if under attack from negative campaigning by the competition, there are several options a candidate can pursue to address dirty tactics.

Andrew Wilkie MP again: “Understand that sometimes things can get nasty out there. But in terms of responding to it, you’ve got to use your judgement. Sometimes things may be best left unremarked upon so you don’t fuel it. Other times you have to defend your character and address the lies and untruths. There is a point in which you have to get on the front foot and correct the record.”

To purchase Get Elected go to www.ruthmcgowan.com/book

Andrew Wilkie MP was first elected as an independent in the seat of Denison, Hobart, Tasmania. It had previously been a safe Labor seat so the first time he campaigned for the seat as an independent in 2010, he was not seen as a real threat by the major parties and was basically ignored. However, that changed when to the surprise of many, he was successfully elected in 2010.

Andrew ran for Denison again, in 2013, as the incumbent. This time things got fierce, but he was re-elected. He was elected again in 2016 and once again is seeking re-election in 2019. Andrew is a veteran of negative campaigns. Here’s his response to the dirty trick of running a smear campaign on an opponent.

“To the unsuspecting public, it was my ad. My colours, my photograph, my branding, up there on a billboard next to one of Hobart’s busiest highways. Except it wasn’t. We were just months out from the 2013 Federal Election and Labor was playing dirty, very dirty. The gloves were off.

“Vote Wilkie = Get Abbott, the billboard screamed under a larger-than-life photograph of me shaking hands with the Liberal leader Tony Abbott, who was wildly unpopular in my left-leaning electorate. Adding to its air of credibility, it was right next to my actual ad on the neighbouring billboard. This was a disaster and a sign of how low Labor was prepared to go in its attempts to regain the seat of Denison. I’d promised no deals this time around, but that didn’t stop Labor’s bald-faced lie. This billboard had the potential to cost me the election, and I needed to act fast to stop the misinformation.

“A benefit of independence is agility. The parties are big lumbering beasts with wide turning circles while independent can turn on a sixpence. Back in the office, I met my small team to brainstorm. The resulting solution was genius and would turn the tables on Labor. I got on the phone to my screenwriter. Within 24 hours, he was on a cherry picker turning my billboard around. On the now blank canvas, he wrote A BIG FAT… LABOR LIE!! with an arrow pointing to the offending ad. Throwing salt in Labor’s eye, the media reported the spectacular own goal.

“Yes, the parties have resources, foot soldiers and experience but independents also have an edge. They are agile and creative and the only ones who can truly represent their electorates, free from the binds of the parties.” 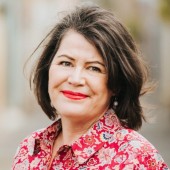 Ruth McGowan OAM is an experienced consultant to the local government sector. Based in Victoria, she manages her consultancy business Ruth McGowan Pty Ltd as an adviser, coach, trainer and facilitator to councils and leadership organisations. A qualified agricultural scientist, Ruth spent the first 20 years of her career managing large projects for the Victorian government before moving to local government - first as a councillor and mayor and now as a consultant. She is the author of 'Get Elected: A step-by-step guide to winning public office'.