I am my first book: @burgewords reports from #bwf16 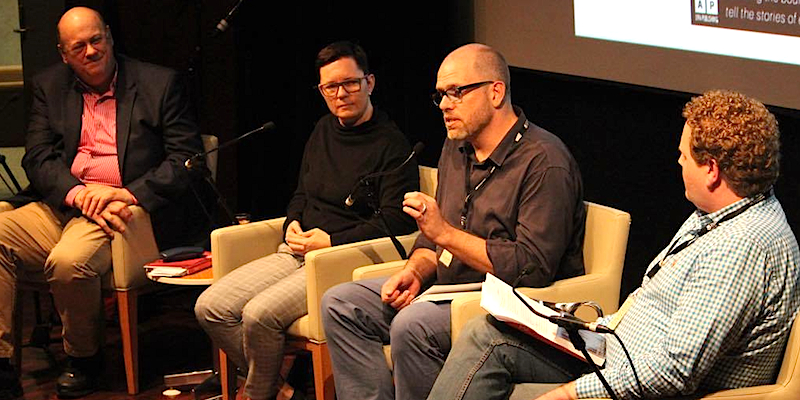 We were inside the building. We belonged, inasmuch as new students belong in new classrooms when they change schools

UNDER the general theme of ‘belonging’, the 2016 Brisbane Writer’s Festival (BWF) set itself up with few boundaries, and writers have been rushing to traverse the intentionally unfenced territory across the city.

As an independently published author, I was pleased to find the door open to my memoir, which has national significance for the lesbian, gay, bisexual, trans, intersex (LGBTI) equality movement. It was written in Queensland about the battle to maintain my next-of-kin status after the death of my same-sex spouse in New South Wales in 2004.

But my indie book about stigma – Questionable Deeds: Making a stand for equal love – has been regularly stigmatised across its first twelve months in print. Locked out of traditional publication and several literary events, awards and festivals, it nevertheless made it into BWF through the generosity of director and CEO Julie Beveridge.

On opening night, emboldened by a glass of quality wine and rallied by a brilliant welcome to country, my husband Richard and I managed to be the first to meet Queensland Premier Annastacia Palaszczuk as she left the stage.

The Premier was generous with her time, listening to my thoughts on independent publishing and allowing us to update her on the national marriage equality campaign. It was indeed a privilege to have her interest and spark a few new ideas about the future of publishing – and marriage – in Australia. 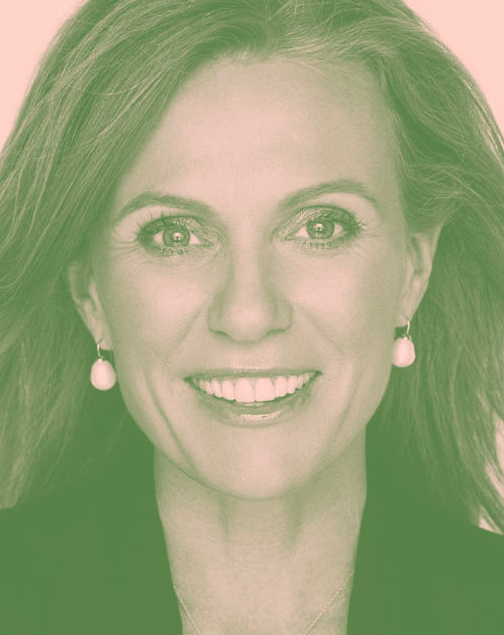 The next day, journalist and author Caroline Overington came to Wynnum Library in my part of the world – Brisbane’s Bayside – to talk about her latest psychological thriller The One Who Got Away.

Overington immediately engaged and challenged her audience, noting there were just a few men in a crowd of women. I laughed with the other guys. I reckon we knew we were not the typical Overington crowd. It’s her journalism I find plenty in common with, and what the heck, I was there to support the festival that supports me and comes to my doorstep. Who am I to be picky?

Caroline proved a very disarming presenter on the deadly issue of crime, explaining how coverage of two crucial Queensland legal cases – the trials of Gerard Baden-Clay and Brett Peter Cowan – led her deeper into fiction writing than she’d ventured before.

Her reason? As the author, she gets to ensure the perpetrator “really gets it”. We all laughed, but it was a knowing ripple, considering the way the legal system all too often works in real life.

I was the one who got away when I had to rush from Caroline’s session into the city to appear on a BWF panel discussion at the State Library of Queensland.

Crying into my book

The LGBTI-themed ‘The Right to Belong’ was something of an experiment, giving oxygen to themes Julie Beveridge told me BWF had often been asked about. 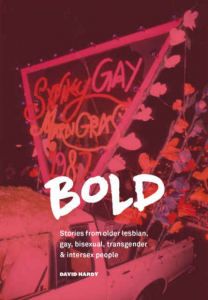 Authors David Hardy (Bold: Stories from older lesbian, gay, bisexual, transgender & intersex people) and Heather Faulkner (North of the Border: Stories from the A Matter of Time Project) joined me and moderator Emile McPhee of the Queensland LGBTI Legal Service.

We each presented our titles, all non-fiction dealing mainly with the national struggle to maintain LGBTI identity in the face of legal and cultural oppression.

Faulkner and Hardy’s works document through images and words some critical LGBTI histories, particularly Queensland’s Bjelke-Petersen years. They are groundbreaking in their scope.

I had not planned my appearance but had a short section of my book to read if the mood took me. Just before I began to speak, Heather read a letter from a friend who couldn’t be there. 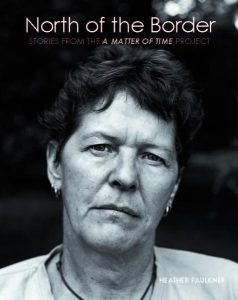 That gentle and powerful message tipped me over the edge almost immediately, and I struggled to recover. My late partner’s death was 12 years ago, but the echoes of the struggle to honour our relationship without him still run very deep. The chances that our story would never reach anyone because of the crippling impact on me, the vessel of the story, were all too relevant in the light of the other authors’ work.

Wondering what on earth I had done by blubbering my way through an extract about the day I gave a live submission to the Human Rights Commission a decade ago, I thanked the audience for letting me come to share part of my story.

We need to talk about Lionel

On the way home across a darkening Moreton Bay, a friend sent me a post published that day by writer Yassmin Abdel-Magied on her reasons for walking out of US author Lionel Shriver’s BWF keynote speech the night prior.

In it, she called-out Shriver (author of We Need to Talk About Kevin), describing the first 20 minutes of the speech as: “A monologue about the right to exploit the stories of ‘others’, simply because it is useful for one’s story.”

This has been an issue for many Australian writers – me included – for more than a decade. 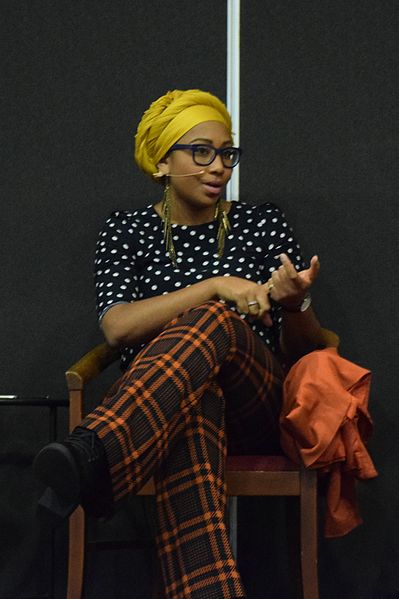 “I can’t speak for the LGBTQI community, those who are neuro-different or people with disabilities, but that’s also the point,” Abdel-Magied wrote.

Cue my right to belong in this argument.

The event that saw three Queensland-based LGBTI authors discuss our work had not been the classic writer’s festival offering.

Authors and audience blended. LGBTI had come to see their own. They asked questions of us and we of them. There were no celebrities and plenty of spare seats.

We were inside the building. We belonged, inasmuch as new students belong in new classrooms when they change schools. It’s an incredible honour, yet there’s a sense that it’s very embryonic.

One of the questions from the floor urged we panelists into some much-needed future thinking: how does the LGBTI community open itself to the kind of mainstream attention that engages the publishing economy in the book and media trade to back us?

The answer relies on readers ‘walking out’ on the kind of media and publishing that marginalises LGBTI stories, and finding us regardless. It also relies on people finding their way to writer talks that might not interest them at first glance.

Within the same 24-hour period, Yassmin Abdel-Magied and I had done just that.

I am not my next book

Caroline Overington and I had the briefest of conversations about books for, by and about women, particularly in Australia.

I was engaged because I am venturing into territory that Lionel Shriver tells me I have a right to enter, and Yasmin Abdel-Magied suggests I do not: creating a 19th century, Irish-born, female protagonist based on the life of a real woman in Colonial NSW whose unique achievements left almost no trace.

Shriver’s point – that fiction writers fake it anyway, so why should there be a limit? – is valid up to the line that Abdel-Magied drew in the sand so effectively in her response.

Access to publication for genuine voices must precede the “colonisation” of identity with inauthentic fictional voices, no matter how effective or sincere.

But I would add there has never been a better time for those voices to reach audiences through independent publication regardless of the notion of access. I’m living proof that if they’re loud and genuine enough, such voices are increasingly being heard.

I am writing a book that is not me.

As a gay, Anglo-Saxon, Australian man with a Maori great grandfather, I don’t believe I will leave a mark in territory I do not already inhabit or have to fake. Inequality is an overriding theme in my writing; it’s a roughly hewn stone with as many slices taken out of it as there are writers.

As someone who may be required to independently publish it, I am keen to write something popular. If that takes artful, empathetic imagination and skill, then so be it.