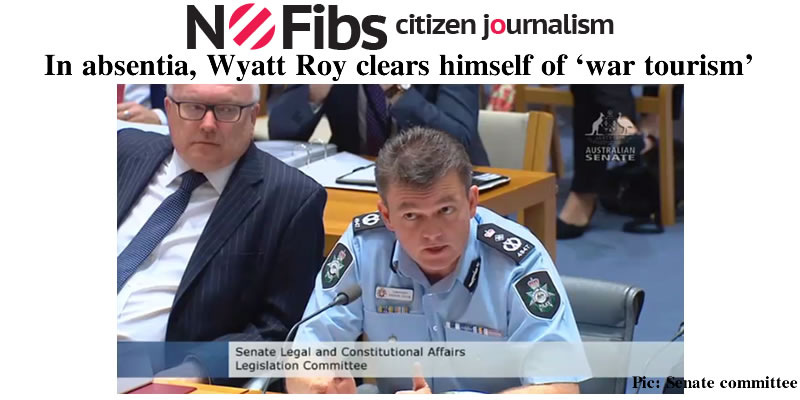 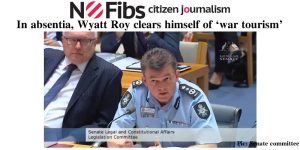 With an omnipresent Attorney-General George Brandis glaring over his shoulder, Australian Federal Police Commissioner Andrew Colvin gave Wyatt Roy the all clear on Monday over his Iraq incursion. The former government minister had toured Iraq earlier this month in an effort ‘to see for himself’ the impact of the war in Iraq and Kurdistan. He’d come under fire from Daesh forces while visiting a Peshmerga encampment.

Greens senator Nick McKim described the venture as ‘war tourism’ as he asked Mr Colvin a series of questions at the Senate’s legal and constitutional affairs committee. Colvin revealed there had not been any referral to the AFP on the matter.

“We were very conscious that it was a high profile matter and we did our due diligence to satisfy ourselves, but no, we don’t have a current open investigation in relation to that,” he answered.

Asked if Mr Roy may have entered a declared area in breach of section 1192 of the criminal code act, Mr Colvin answered that based on media reports he had not.

“Based on the public reporting we did form a conclusion that we didn’t believe the offences had been committed.”

Questioned if Mr Roy had been interviewed by the AFP, Mr Colvin again reiterated that there was no investigation.

“We didn’t have an investigation, Senator.”

Pressed further on what work the AFP did in relation to the matter, Mr Colvin again pointed to media reports.

“I don’t know if Mr Roy has returned to the country. I’m not too sure?” he said looking across at AFP Deputy Commissioner Michael Phelan.

Mr Phelan added that Mr Roy was treated no differently to any journalist or person that travelled to the area.

“It’s not dissimilar to a number of other matters that have happened before when we’ve had journalists go overseas into theatre. We’ve had families of traveling members and so on. We have a preliminary look at those people that have travelled over, to see, whether or not that we believe they have gone to declared areas, etc., Similar to those matters, we’ve found no evidence at all that suggests that any offenses have been committed,” he stated.

Further questioning was interrupted by a point-of-order from an attentive George Brandis who mounted the private citizen defence for the government.

“I just wonder why the affairs for a private citizen who is not under investigation and in respect of whom there is no view held by the Australian Federal Police that they are, may have committed an offence should be a matter for this estimates committee.”

Senator McKim countered with public statements from Prime Minister Malcolm Turnbull who had condemned Mr Roy’s actions at the time.

“The prime minister himself was very critical of Mr Roy’s actions. This is a legitimate matter for this committee because the AFP, on their own motion, reviewed the publicly available information relating to Mr Roy and that’s the matter I’m asking questions about,” he said.

Allowed one last question to Mr Colvin, Senator McKim asked in relation to others who had travelled to the conflict zone, how the AFP had come to their conclusions on those cases.

“We have treated the matters of Mr Roy no different to any other Australian citizen. Obviously, we take an interest to Australian citizens who travel to the conflict zone and by interest I don’t want that to be interpreted as criminal interest but we may be able to glean other material information,” he stated.

“We wouldn’t normally talk about them, obviously, but Mr Roy’s matter was in the public. I don’t plan to go into a great deal of detail but we take a general interest in people who travel to the conflict zone.”

In absentia, Wyatt Roy appears to have cleared himself. The bulk of media reports had come from him. Journalists used footage from multiple links that Roy had uploaded to the internet, such as the fire fight. They had also interviewed him by video link after the event from various locations in the Middle East. He’d also had an article published in the The Australian documenting his experiences.

Despite originating from one source, filtered through multiple media outlets and without ever having interviewed Mr Roy themselves, the public record was enough for the AFP to conclude no criminality.