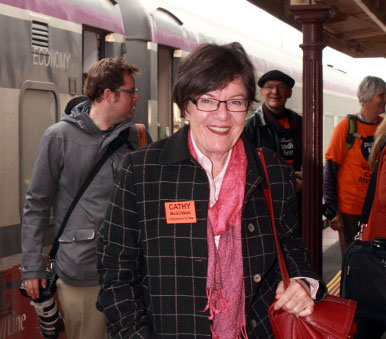 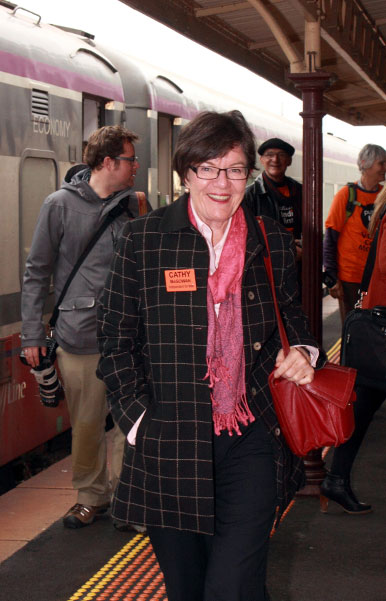 Katter’s Australian Party (KAP) candidate in Indi, Phil Rourke, caused a storm on Friday when The Border Mail reported he urged voters concerned with local issues to make Liberal incumbent Sophie Mirabella their first choice, even before him.

“The worst thing that can happen to Indi is to have an independent if there’s a coalition government,” he said.

Robert Danieli, KAP’s Victorian senate candidate, said: “If you’re purely focused on local issues and you just want better roads or hospitals, the way the polls are looking it’s going to be a few seats majority to the coalition.”

He explained Rourke’s thinking was ‘if you want things to improve for Indi you’d be better off with the current member because she will be in the government’.

Danieli said KAP was concerned with national issues. “We’re not concerned about individual electorates. Of course we’ll do the right thing by them but we’re concerned with the big issues. Why focus on these issues that have been dreamed up over a cup of tea around a kitchen table by someone who’s totally unknown?”

In the week Barnaby Joyce came to town to back Mirabella’s re-election campaign in Indi, the controversial Liberal was accused of falsely claiming credit for bringing key health services to her Victorian electorate.

In a recent letter to constituents, Mirabella claimed a part in setting up a youth mental health centre in Indi: “working to support the local community campaign, we successfully lobbied the CEO of Headspace, Dr Chris Tanti, for a Headspace centre right here on the Border”.

But The Border Mail newspaper quoted former federal mental health minister Mark Butler as saying he’d “never spoken to Sophie Mirabella about Headspace”, and she was claiming credit for the work of others.

Similarly, people who were heavily involved in pushing for the Border Regional Cancer Centre expressed shock and disappointment that Mirabella had written to constituents overstating her involvement in that campaign.  Campaigner Marianne Warren told The Border Mail: “It wasn’t Sophie Mirabella, it was people power that got the centre”.

In another controversial move, Mirabella appears to have defied Tony Abbott (or Abbott has lied), by placing Rise Up Australia ahead of a number of candidates on her how-to-vote card, including The Greens and leading independent Cathy McGowan. Originally Abbott declared The Greens would be preferenced last in all 150 House of Representatives seats, but on Monday he backtracked, telling reporters “racist” parties “are put behind The Greens”.

The Australian reported Rise Up Australia was among the parties considered beyond the pale: “A Coalition spokeswoman today confirmed how-to-vote cards in lower-house seats where parties such as One Nation, Socialist Equity and Rise Up Australia were running wouldn’t put the Greens last.”

But the Border Mail quoted Mirabella as saying the ballot ordering was “done by party headquarters”.

Rise Up Australia is number 6 on Mirabella’s how-to-vote card.

Rise Up Australia leader Daniel Nalliah caused anger among people in Indi with his comments on the 2009 bushfires that devastated parts of Victoria. He was quoted in the Brisbane Times linking the deadly fires with the practice of abortion:

“In my dream I saw fire everywhere with flames burning very high and uncontrollably. With this I woke up from my dream with the interpretation as the following words came to me in a flash from the Spirit of God: that his conditional protection has been removed from the nation of Australia, in particular Victoria, for approving the slaughter of innocent children in the womb.”

“People in Marysville were very, very upset” with his comments, the ALP’s Robyn Walsh told No Fibs on Tuesday. Walsh was a bushfire case manager when 60 per cent of her shire of Murrindindi was burnt out in the fires. “We can’t have somebody saying those types of things and getting away with it,” she added.

In response to being placed at the bottom of the ticket, Jenny O’Connor of The Greens tweeted:

Independent Jennifer Podesta has ranked her preferences as: McGowan 2, Mirabella 3. Her full preferences and reasons can be viewed on her website.

Barnaby Joyce, the former Nationals senator running for the NSW seat of New England, added some heft to Mirabella’s campaign on Thursday as he joined her in announcing a pledge of $1.84 million to seal roads in Indigo Shire in the Coalition is elected.

In only her second tweet of the campaign, Mirabella also on Thursday announced a coalition manufacturing policy:

Mirabella has put out a flurry of letters and campaign material since the official campaign began, even publishing a new calendar in August.  Among the offerings, her Mummy Magnet raised a good laugh, until a Twitter user pointed out the omission of a referral for domestic violence victims. 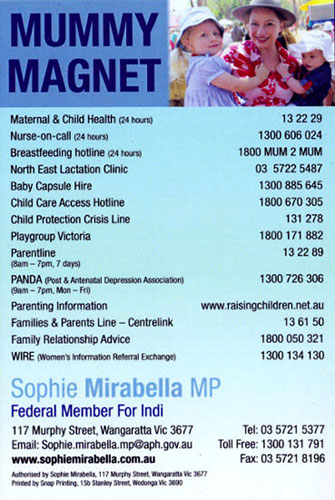 The Border Mail quoted Jasper as saying, “I am not on her committee and I am not involved directly in her campaign at all“. Rumours of National Party members getting squarely behind McGowan’s push for Canberra seem to pre-date the widely reported stoush between the Liberals and Nationals in the rural Victorian seat of Mallee. Last week McGowan confirmed she had “support right across the political spectrum”. McGowan is Mirabella’s biggest threat on polling day.

Playwright Van Badham continues to throw her support behind Cathy McGowan.  Asked by No Fibs asked her about Nationals members supporting McGowan’s campaign, she said: “When you have a party that pretends to represent you and doesn’t … Who the hell knew what the issues were in Lyne before (Rob) Oakeshott got elected?”

Van is continuing to call on Twitter users to support McGowan’s campaign in Indi:

McGowan released her Transport policy while riding a train on Wednesday  from Wodonga to Benalla. Fixing the Wodonga to Melbourne rail track is listed as a priority.

She has committed to:

On Tuesday, Robyn Walsh announced a Rudd Labor government would provide almost $250,000 in funding under the “Progressing Place” scheme.  A press release spoke of “building on its pledge to support strong, prosperous regional and local communities”. On Wednesday Walsh tweeted:

The Greens have released their full range of costed policies which can be viewed here.