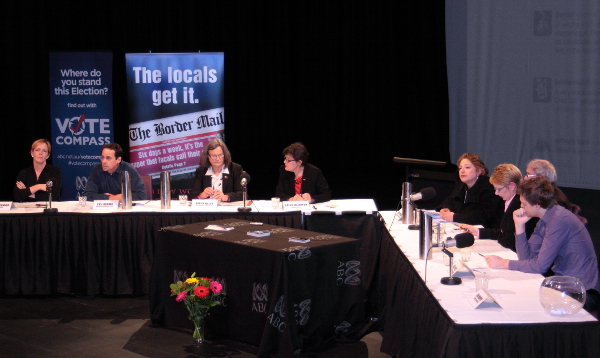 #IndiVotes created its own version of #QandA on Monday night at The Cube in Wodonga. It was a night full of passion and at times fire as the candidates battled it out in front of a capacity crowd of more than 300. The #IndiVotes hash tag was displayed on a big screen for the event and the night was broadcast throughout Southern NSW, North East Victoria and the Goulburn Valley. 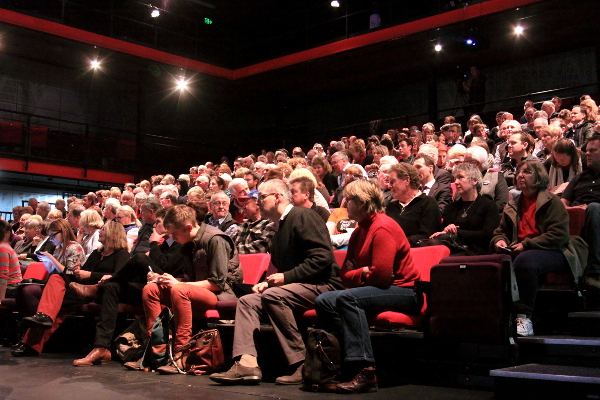 The crowd at The Cube in Wodonga 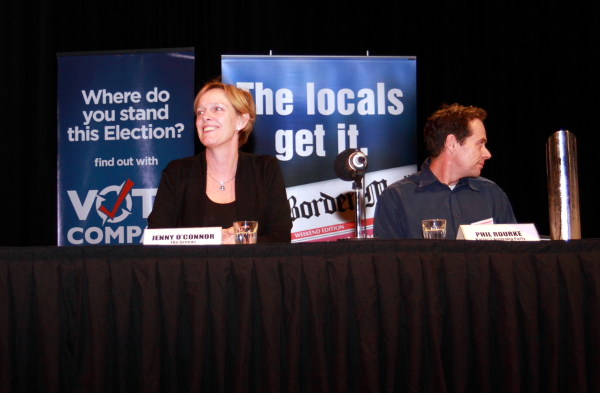 Jenny O’Connor surveys the crowd while Phil Rouke chats to fellow candidates, waiting for the forum to begin.

Candidates had 30 seconds for their pitch. Phil Rouke said Australia was in a crisis. Podesta has built a thriving business servicing the region. Walsh was proud of what Labor had done for Indi and “we can’t afford cuts”. Mirabella had experience to create jobs. McGowan said vote for me because change in Indi was already happening because of me, to which she received loud applause. O’Connor said the old parties had gone further and further to the right and she was a voice for progressive thinkers. The ‘bullet train guy’ Will Hayes said Indi has the most to gain in Australia from a high speed rail network. Bob Dudley wanted regional tariffs.

Sophie Mirabella said Tony Abbott had visited Indi six times on 6 and the Coalition governs for all Australians. When questioned about the advantages of a marginal seat, O’Connor pointed out there had been more “lollie” thrown around in the last 3 weeks than in decades. Walsh interjected, pointing out all the money the ALP spent in Indi during the last six years. 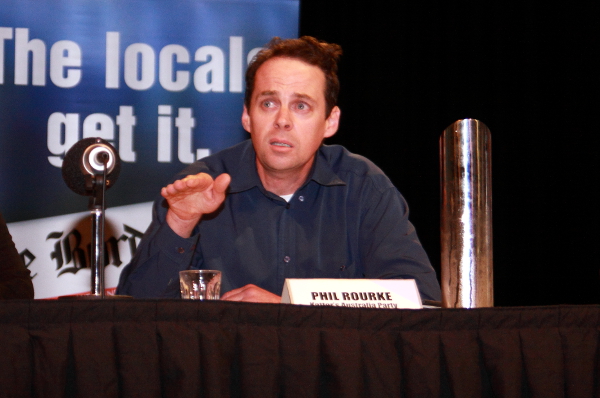 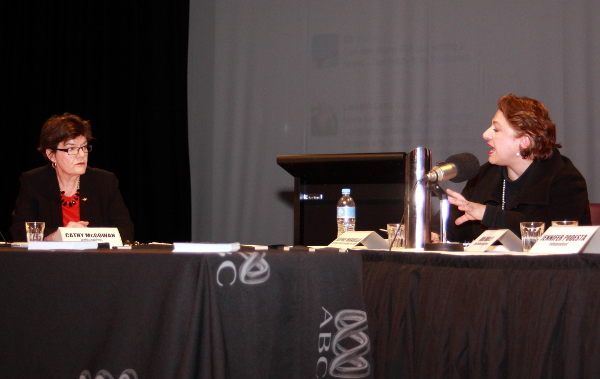 A question from the floor regarding McGowan’s capacity to consult the people of Indi.

O’Connor rejected the idea that a hung parliament was undemocratic. The debate turned fiery when the topic moved to the price on carbon. Mirabella claimed emissions would increase – O’Connor ‘that’s a lie and irresponsible’, pointing to the reduction since a price on carbon was introduced. 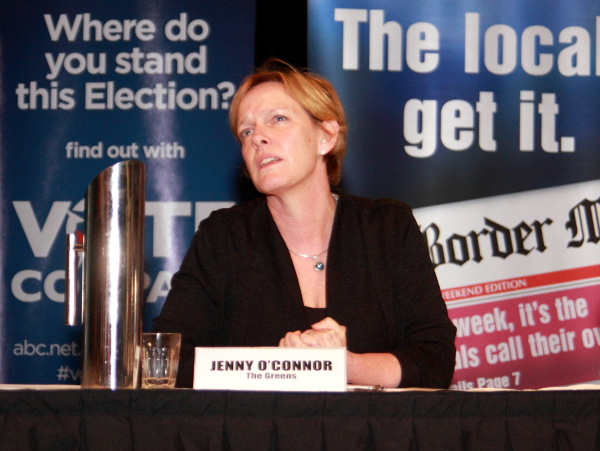 O’Connor called for people to stop focusing on attaining a surplus, suggesting we should be investing for the future. Walsh was unsure when the ALP would move the budget to surplus but pointed to asset sales to achieve a surplus under the Howard government. Mirabella could not say when an Abbott government would move the budget to surplus but ruled out cuts to health and education – Liberal cuts would be targeted towards waste and mis-management. 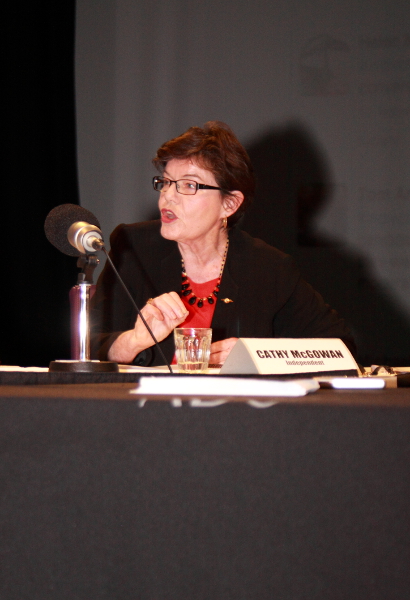 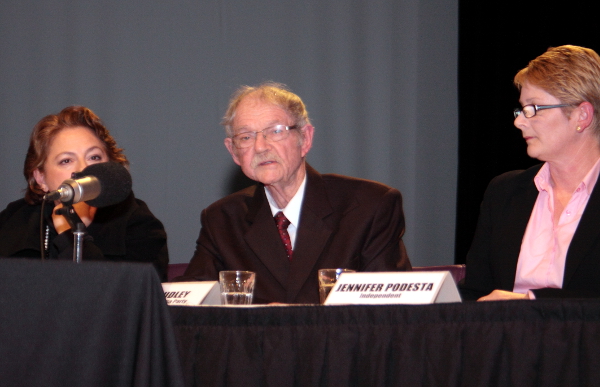 All agreed mobile coverage needed to be fixed and that even in major centres coverage was bad. Bob Dudley suggested sparse population was one of the main problems. Personally I was surprised no one pointed out the current poor mobile coverage is a result of the Howard government selling Telstra – Telstra neglects all telecommunications in areas of low population density.

The owner of Steve and Linda’s IGA of Wangaratta questioned McGowan about the duopoly. He complained that McGowan had never been to his store. McGowan pointed out she doesn’t live in Wangaratta and did her supermarket shopping in Yackandandah. The supermarket owner continued in an angry fashion – security was moved into place and he calmed down. 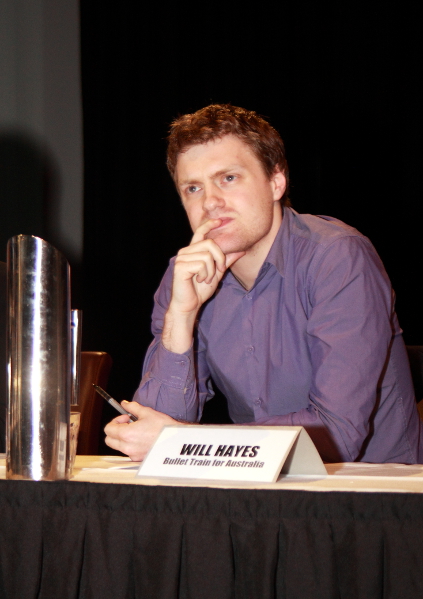 Will Hayes the bullet train guy moves the subject matter back to fast rail. 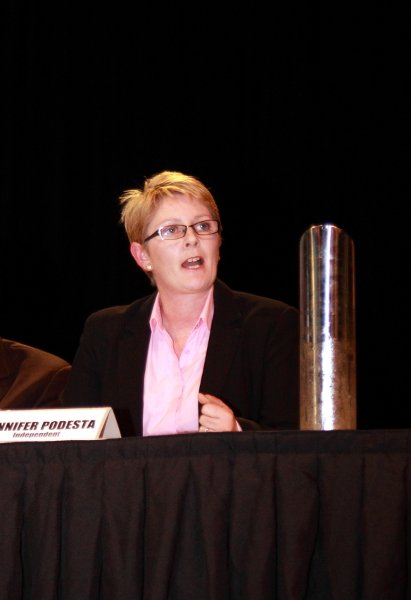 Moving to questions on better health services in the region, Rourke said he would do what made sense. Mirabella pointed to commitments already made. Podesta said Albury/Wodonga health had never had sufficient funding. Walsh pointed to health cuts from state Coalition governments. McGowan thanked the questioner for her work campaigning for better health services in Indi. 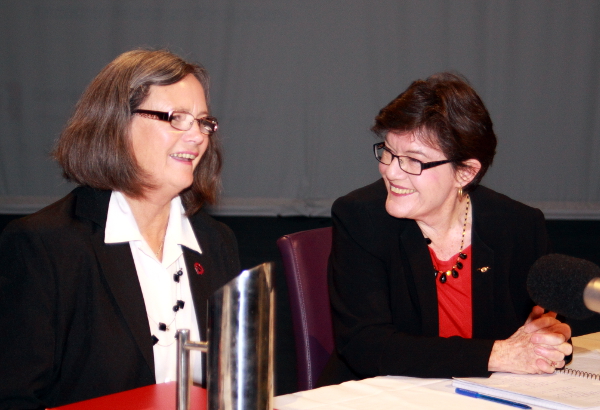 Walsh and McGowan share a laugh during a break. 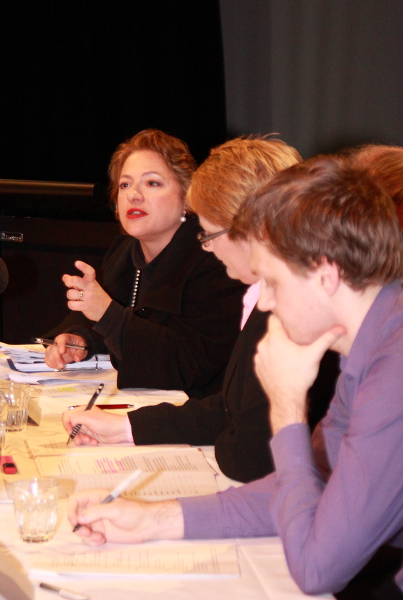 Mirabella was questioned about the coalitions dedication to education in Indi. She responded that “its about credibility” and managing the economy.

Same sex marriage. Support from O’Connor, Walsh, McGowan and Podesta. Against Rouke, Mirabella, Dudley. Hayes said his party had no position for it.

Mirabella was asked about the ethics of the Coalition refugee policy. Mirabella was stopped as she used twice the time allotted for answering questions. 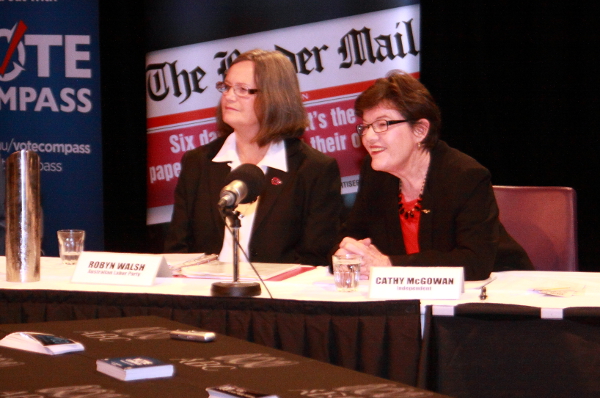 Bullet train guy was asked about women of calibre via twitter, which drew laugher from all.

Candidates were asked if they would preserve penalty rates. All said yes except McGowan who said it depends and Podesta who said no.

The Greens did a preference deal with Clive Palmer in the Senate which O’Connor is not happy about, but pointed out his refugee policy was more humane than either main party. Also it was part of the deal so she could preference McGowan.

Mirabella on using term ‘illegal’ for refugees – it’s used in various agreements. O’Connor said the term was horrible – “they are people” and are almost always found to be genuine refugees. 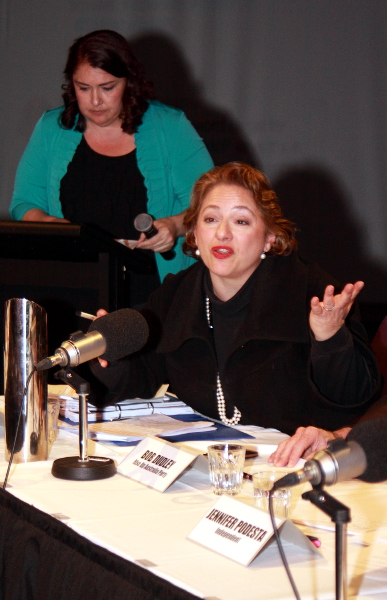 Mirabella said that sitting at the cabinet table she could get things done – “I’m the youngest and most experienced candidate here”. Bullet train guy Hayes looks at about 10-15 years younger.

Mirabella was asked what she did about getting Headspace to Wodonga. Walsh pointed out that the ALP put $20 million to the program in Indi. 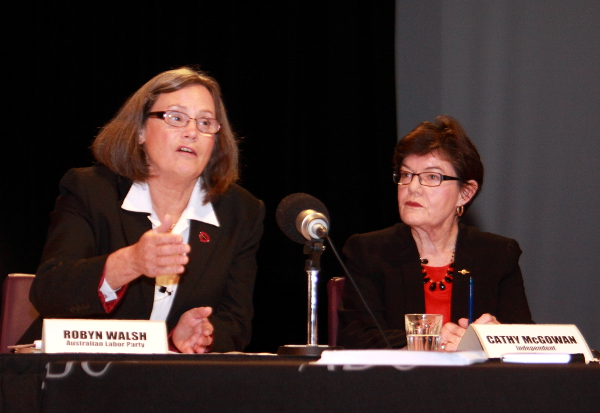 Mirabella said the Liberals Paid Parental Leave would be paid for by levy. O’Connor disputed this and Walsh interjected about Mirabella constantly running over time.

When asked who would win the seat of Indi, Hayes said it was a three train race and the bullet train wins every time.