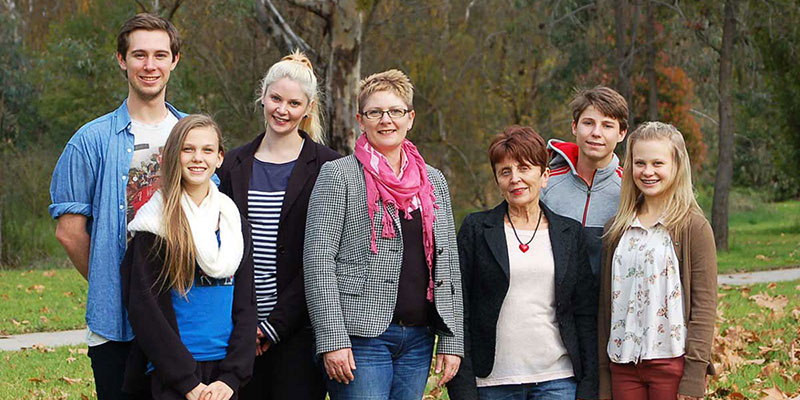 I have had a bit of an interest in politics for a very long time. I am a small business owner – my husband and I have a dance school in Albury/Wodonga. I started my first business when I was 18. We’ve been involved in running dance schools in the area for a very long time. More recently I’ve been doing a Ph.D in sociology at the university of Melbourne. I'm just over halfway through that at the moment.

I've been involved in politics for quite some time. My former husband was a local councillor on the Albury City Council and I ran his election. He also stood as an independent candidate for a NSW state election and I also ran his campaign for that. I’ve had a bit of an interest in politics for a very long time.

Last year I stood as an independent candidate in the federal Seat of Indi – now famous for the outstanding win by another independent, Cathy McGowan, over the three-term incumbent Sophie Mirabella. Much has already been said and written about that.

The experience of standing as a candidate was at once exhilarating and heartbreaking, but I grew enormously from the opportunity and came away from it surer than ever that despite the general lack of enthusiasm for politicians and politics in the electorate, it was indeed the path I wished to follow.

After letting the dust settle, in November last year I made the decision to join the ALP. Having expressed some strong concerns during the campaign about the keenly partisan nature of politics in Australia, and having already left the Greens in early 2013, the decision to join Labor was not taken lightly. Following are some thoughts about why I decided to do so.

Whilst I think the voice of independents and minor parties remains important to providing dissenting views and diverse voices, I have come to believe it is the nature of Australian politics to be a strong two-party system and it is these two parties that have and will continue to have the greatest capacity to shape the future of our nation. I feel I have the skills, experience and passion to contribute to this future and that I can best do that as a member of the Labor Party.

I am currently completing a PhD in sociology and as such I study the links between the structures and institutions of society and the lived experiences of individuals. I have been lucky enough in my life to travel to many parts of the world and one thing that is always made clear when I travel is how very lucky we are in Australia in so many ways. But what is increasingly clear to me is how wide the gap is getting between those who can benefit from that luck and those that can’t – be it in health care, education, jobs, housing or opportunity. Rather than the country of the ‘fair go’ we are increasingly becoming a country of deeply entrenched inequality and exclusion that impacts most severely on those who most need our care – our children, our disabled and our elderly.

For me the Labor Party is the party that has continually had the vision to stare that inequality in the face and make the changes needed to address it. Sometimes efforts to make those changes have been hasty, badly implemented, incomplete and costly. But those are things that can be learned from, improved on, and hopefully better managed in the future. The big changes – the tough things that are worth doing – don’t always run smoothly, but that doesn’t mean we shouldn’t pursue them.

Labor understands that as individuals we are only as safe, healthy, secure and strong as the communities we live in and that the first and most important role of government is to ensure that its people are cared for when they aren’t able to care for themselves, and that there is as much equality of opportunity as possible. It understands that unfortunately every child is not born equal, but that the best way to address that is through education: ‘pulling oneself up by one’s bootstraps’ is a lot easier to achieve if you have strong social networks, great role models, self-confidence and a secure safety net.  My own research with the children from disadvantaged families provides plenty of evidence about this. You cannot lift a country up by leaving people behind and punishing the weak and those least able to fight for their rights.

My decision to join Labor has, I think, been strongly vindicated by the recent actions of the Coalition governments state and federal. It is my belief that the Coalition in power takes this country backwards economically, socially and, most importantly, spiritually. Its focus on the budget deficit almost to the exclusion of all else reveals an ideological position that is driven by fiscal priorities that preference business and market imperatives over the needs of people. This ignores the long-term costs of not investing in the wellbeing and skills of the nation. It thrives on the narrow-minded fear of those who have been fooled into believing that if we shut out the things we don’t like or the ideas that challenge us they will just go away and that if we all just protect our own interests then we will be okay. It has been my experience in life that I get the greatest rewards when I put the needs of others ahead of my own and when I open my life to share it with others. I believe our country is the same and we need leaders who will articulate that to the electorate. ‘Aspiration’ is a word that has become synonymous with the Liberal side of politics, and I think aspiration is essential, but it just can’t be for individuals; we also need to aspire for things as a collective – to be better in our families, our communities and as a nation.

Having said that, I am not going to pretend that I agree with current Labor policy on all issues. I also think the Labor Party has a lot of changing to do both in terms of its inner workings and its policy.  Again, I think as a sociologist, a small business owner, and living in regional Australia, I am in a good place to contribute to that. The world is changing at a rapid pace and we need to change with it: adapt so as our policies and institutions are equipped to meet those changes. It is not good enough to be responding to 21st century issues with 20th century policies and actions. We need to be progressive in order to meet the challenges of the future not stubbornly hanging on to things of the past.

As a party, Labor is working on changing itself, although like most change it will be incremental, sometimes painful and even cathartic. There will no doubt be casualties along the way and sometimes it won’t be pretty. But it is becoming more open, more democratic, and more diverse and inclusive – for example I am not, nor have I ever been a member of a union.

It is only by becoming involved that it is possible to make change happen. I have a strong desire to contribute to that process and look forward to seeing how my involvement with the party develops over coming years.