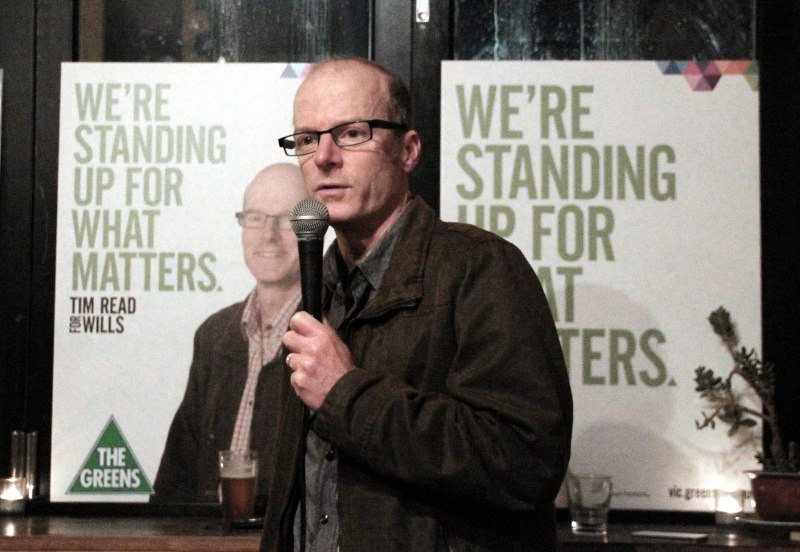 The Greens achieved 20 per cent of the vote in Wills in 2010, four percent less than the Liberal Party. They are hoping to improve on this result this time, although it may be a tough ask given the national mood and the polarisation of the electorate.

Dr Tim Read joined the Greens two years ago after noticing the work of former medical practitioner and Victorian Greens Senator Richard Di Natale, who has been a strong influence on a Senate Committee on anti-biotic resistance and what the government doing about it (see Australia’s failure to act on antibiotics resistance risk lives). While such reports fly under the radar in most public discussion and the media, the medical profession took some notice, including Dr Read.

But his major reason for contesting Wills is a deep concern that we need to take substantive action on climate change this decade – the critical decade. “I’ve got kids, doing a PhD, I’ve got patients, I don’t really have time to be a political candidate. The evidence that global warming is evidently happening is all around us now… We really don’t have a lot of time left to act and really do something about it. That was something that persuaded me to add political candidate to my CV.”

Watching Al Gore’s film An Inconvenient Truth eight years ago was a pivotal moment. “We moved back into our renovated house. Our daughter was born two weeks later. A few weeks after that I went and saw An Inconvenient Truth, and I thought ‘Shit, we have just put in 44 halogen downlights’. So over that time our life has changed by trying to do some things to reduce our carbon footprint and fortunately we started off with solar hot water. We went with Greenpower early on because we thought that was better to encourage the renewable industry rather than solar PV, but since the State Liberal effective ban on new windfarms in Victoria, we decided that incentive wasn’t going to be effective, so we just put solar PV panels on our roof at the beginning of this year. We got rid of the second car a while ago: sold it for $600 and bought a bike for $900. I commute to work. It is only 20 minutes by bike.”

He cites recent reports on the climate maths and the carbon bubble that Australia is promoting through the expansion of coal mining for the export market which negates many times over the savings made through the carbon price and believes the policy announcement by the Greens for a small tax of $2 per tonne on thermal coal exports is a necessary first step to tackling the coal issue.

“I like that for a number of reasons, but the money raised is to be used just locally at this stage for disaster relief and flood mitigation and prevention: raising levee banks and that sort of thing. Money spent doing that is more cost effective than dealing with it afterwards.”

He said the refugee issue works to the Greens benefit inner city electorates like Wills. “I think that particularly since the announcement of settling refugees in Papua New Guinea, that seems to have crossed the line for a lot of people. The refugee issue has always been a very concerning, a bit polarising as well. You get comments in favour of it, I have to be honest, and others against it. But suddenly this announcement of sending people to Papua New Guinea is one that a lot of people see as preposterous, and completely unrealistic.”

“I spent a few months in Papua New Guinea as a medical student in the 1980s and I returned in 2007 and 2009 in aid-funded projects assisting the Health system there. There are few countries on Earth less suited to accommodate some sort of colony of refugees. At the moment PNG is grappling with an epidemic of drug resistant tuberculosis, is fatal in PNG and would be quite often fatal here if people got it. We are talking about a country that has got one of the highest rates of death in childbirth, where security is poor. A month ago a bunch of armed soldiers from the PNG Defence Force went on a rampage through Port Moresby Hospital firing shots and injuring people. Not the sort of country where you send a bunch of people who need to be resettled and helped.”

Tim Read said at the Greens Campaign launch that education and refugees were the two main issues for Wills voters, although there a large degree of disengagement on main election issues. Climate Change was also an issue of concern, with a public meet the candidate forum being organised by Climate Action Moreland for Monday 19 August.

Defeating sitting MP Kelvin Thomson (see candidate profile) was unlikely, he said, and urged voters in particular to support Janet Rice in the Senate in Victoria.

In terms of preferences Tim urged voters to make their own informed decision. “The key thing that I am stressing to everyone who is asking me: you make up your own mind, put your preference where you want it and don’t get told by the Greens or anybody else where you should put your second choice. I would strongly encourage people to vote Greens, and for those who feel a particular attachment to the local Labor member, I would strongly encourage them to vote Greens in the Senate, because I think Janet Rice is not a shoe-in. We only just got a quota the last Federal election and we may not get a quota this time.”