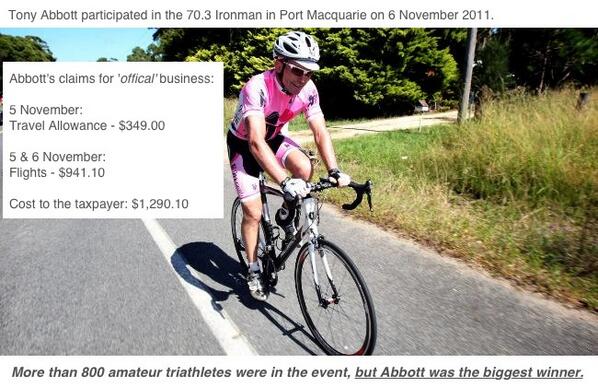 For as long as I’ve been on Twitter tweeps have questioned the correctness of Mr Abbott’s claiming travel allowance from taxpayers for his ‘volunteer’ activities.

Even if someone raised it with the Finance Department, it would probably just seek an assurance from Mr Abbott’s office that he was responding to a community group’s request or invitation etc to attend (which they would no doubt give Finance).

The issue here is therefore not wrongly claiming travel allowance, but whether Mr Abbott, or the media which cover these events claims that these activities are volunteering or for charity. They are not. In fact, Mr Abbott is doing his job and being paid handsomely for it.

If you can find examples of false reporting or false ‘volunteer’ claims, please put them in the comments section.