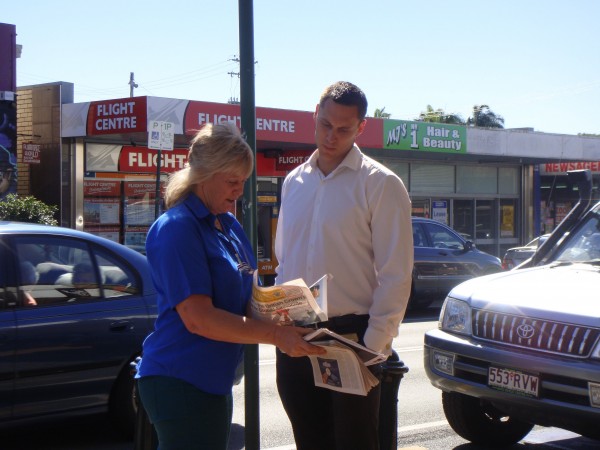 For 12 years, Jan Pukallus has been running for election in Queensland – and today was a moment of celebration for the veteran campaigner: it was the first time she’d been invited for a sit-down interview by a journalist.

Pukallus is the Citizen Electoral Council’s (CEC) candidate for Forde, the electorate that was catapulted into the national spotlight a fortnight ago when former Queensland Premier Peter Beattie announced he was taking a shot at the seat.

At a candidates’ forum earlier in the week, I was struck by Pukallus’s grassroots poise on stage. It can’t be easy, I thought, to be a fringe candidate up against the likes of Beattie.

“At first it was daunting,” she said. “In 2001 I stood for the seat of Dawson, against Deanne Kelly.

“I remember being in the kitchen making sandwiches for my kids’ lunches and all of a sudden the phone rings – it was the media wanting to know whether someone should go to jail for burning the flag.

“That was the wrong question – what they should have been asking is ‘why would someone want to burn the flag?’

“It’s only a scrap of material – the important thing was why.”

She giggles. Pukallus has a sweet laugh that follows most of her comments, as if the world itself is funny.

Then she adds: “I’ve represented Australia a few times – I know what it is to hold up the flag.”

She looks shy when I smile and ask how she represented Australia.

I put a series of questions to Pukallus during our time together at a coffee shop in downtown Beenleigh.

First, she’s fed up with the stranglehold the ‘Lib-Labs’ have on Australian politics.

“It’s fascism, pure and simple,” she says. “This is a democratic society and all political candidates are entitled to equal coverage.”

I said some would suggest the CEC was a fascist organisation.

“A greenie said that to me last night,” she says. “That’s what happens when you take on the banks – you get labeled and slandered.”

All Pukallus’s responses come back to the global economic situation – and the CEC’s demands not so much to overhaul the system, but to pretty much smash it all together.

“Our enemy is the British Empire and their free trade system,” she says. “And before that it was the Venetians and before that the Romans.”

In fact talking to Pukallus is a lot like a melodious, if one-eyed history lesson, her words dancing on the wind as she roams through time and space – literally.  At one point she has us out on Mars with NASA’s Mars Reconnaissance Orbiter, Curiosity – a showcase example, she says, of co-operation between sovereign states.

Her answers are without exception a kaleidoscope journey through the rise and fall of nations, empires and religions.

I ask about local issues, but Pukallus cannot separate the local economy from the global economy.

So I put forward a few issues high on the national political agenda:

Asylum seekers – “We should dump the divide-and-conquer policies of Britain and assimilate refugees – put them and anyone else who needs a job to work on big nation-building projects, like high-speed rail linking agricultural and mining areas.”

Gay marriage – “They’re going to die of starvation or disease just like the rest of us. Whether you’re black, white, gay or vegetarian, who cares? We all have a right to be here.”

Climate change – “The carbon tax was a fascist tax on carbon, a tax on the gas of life. The climate of the planet is always changing, and there’s a political agenda to depopulate the planet – we’re going back to the survival of the fittest.”

She adds: “That’s why I ran against Kevin Rudd last election – he’s one of the Queens’ men. You watch – every prime minister and treasurer gets a free trip to London, just so the empire can push its free-trade policies.”

Pukallus is not religious – she’s committed. She believes that if you’re pissed off with the political and/or economic system, you have an obligation to do something about it.

“Dropping out is not an option,” she says. “It’s riding on the back of everyone else.

“That’s what most greenies do in cities, bludge off the work of previous generations.

“It’s our human responsibility to come up with ideas and solve problems.”

I lightheartedly put it to her that the CEC are the Mormons of politics.

She doesn’t appreciate the analogy, despite the fact that she doesn’t want her photo taken pretending to hand out leaflets, she wants to hand them out. I sit down again at our table on the footpath while she fills in a young man in a suit on how the government wants to ‘kill us all off by shutting down health care’.

She sits down again, and the conversation morphs to cycles of life and mass extinctions, and the human race’s ability to meet challenges.

“For example, if an asteroid was on track to wipe us out, we have the ability to turn satellites and nuclear weapons outward to deflect it.”

For someone with a doomsday outlook, Pukallus is exceedingly bright and easy going.

She says she ‘practises classical literature’ to ‘keep a positive outlook’.

“And I love reciting poetry. It’s education for the soul. If you just have a diet of media you’ll get incredibly negative.”

Pukallus moved to Beenleigh from Mackay seven years ago, in alignment with  her ‘political obligation’ philosophy.

“But what’s the use of having your own little oasis, your own Shangri-La, when everywhere else is going to pot?

“I said to my husband, we have to go where we’re needed. He’s right behind me.”

I ask Pukallus how she thinks she’ll go on September 7, when the people of Forde head for the polling booths.

“I’ve got at least three votes,” she laughs.

“The point is the joy I get from pursuing a mission for the future.

“Poetry gives me courage to keep going. It can be fearsome facing the media. Poetry emboldens me, reminds me it’s not just about little ol’me, that I’m part of a continuity of ideas for independence and sovereignty and republicanism.”