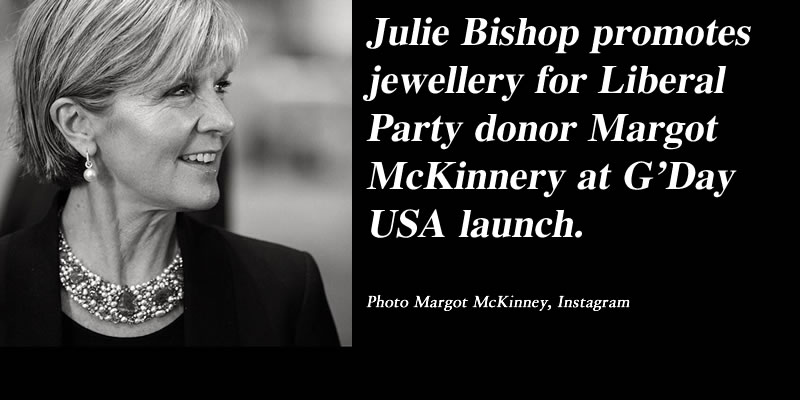 The jeweller, the retailer and the foreign minister. How a blue opal necklace linked Julie Bishop to Liberal Party donors and sparked the war over the abolition of Sunday penalty rates. 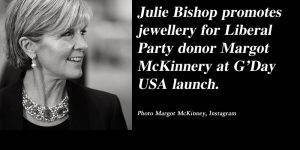 Foreign minister Julie Bishop has modelled an opal collier for one of the Liberal Party’s donors at the launch of the taxpayer funded program, “G’Day USA”. The Federal Government describes the program as,”the most important public diplomacy program promoting Australian capabilities in the US”.

The bright blue necklace caught the eye of citizen journalists who began to investigate and share their findings over Twitter. It wasn’t long before a number of recent events including calls for the abolition of weekend penalty rates began to fall into place.

Records at the Electoral Commission of Queensland (ECQ) confirmed jeweller Margot McKinney donated $5,000 to the Liberal Party of Australia on July 26, 2010. 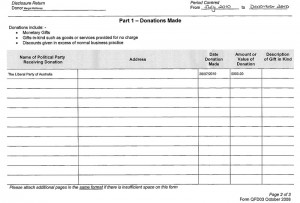 The ECQ received the disclosure form on August, 20, 2012. The form was completed by Annette Ringuet. Ringuet’s LinkedIN profile confirmed she worked in ‘Accounting & Inventory’ at Margot McKinney Jewellery. 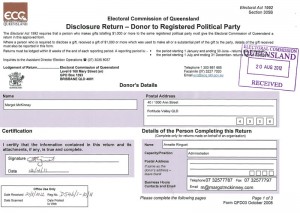 The ECQ received the disclosure form on August, 20, 2012. The form was completed by Annette Ringuet.

On December 18, 2015, Julie Bishop appeared with two models in a Newscorp story sporting the opal collier, “G’Day USA program set to place Australia firmly on the business and innovation map”. 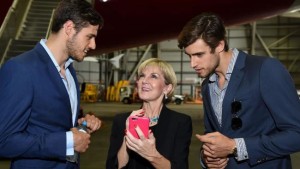 On December 20, 2015 Margot McKinney posted a photo of Annette Ringuet with Foreign Minister Julie Bishop wearing the necklace at the G’Day USA launch.

On December 22, 2015, McKinney uploaded a photo of Bishop wearing the necklace to Instagram confirming that the necklace was her product by commenting, “Thank you for wearing the Margot McKinney Opal Collier so beautifully.” 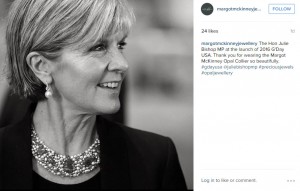 Annette Ringuet in The Courier Mail – This will allow us to provide better service.

The article prompted a backlash over Facebook from the Electrical Trades Union who recommended people consider not shopping at the camping store.  Overwhelmed by responses, the store’s Facebook account remains offline; The Great Escape Camping Co.

Queensland federal Labor MP for Griffith Terri Butler jovially remarked on the coincidence of Bishop and Ringuet meeting at the G’Day USA launch.

Wow! What a coincidence #auspol pic.twitter.com/V3GClQ0hBv

The battle over penalty rates is set to ramp up in the 2016 election year with Queensland unions expected to mount a similar campaign to the one launched against the Newman Government at the 2015 poll  over privatisation.

The Tweet depicting Julie Bishop and Annette Ringuet has been deleted but we’ve saved a copy. 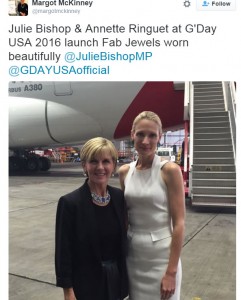 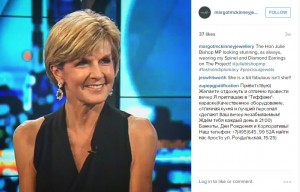 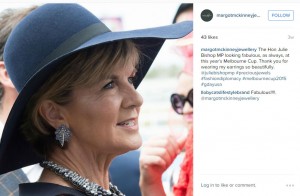