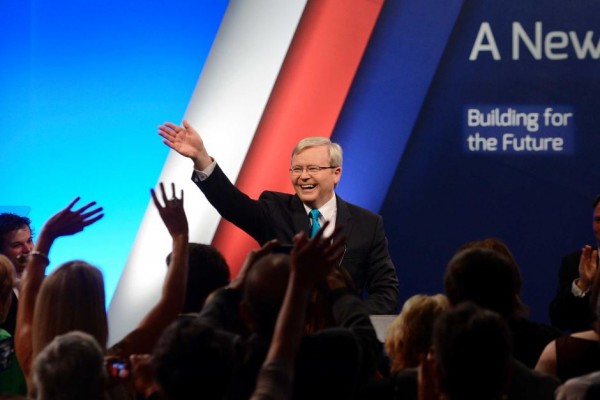 Beautiful Brisbane. Perfect this time of year. Why would you want to be anywhere else but Queensland?  I keep asking myself the same question everyday about Australian Politics.  Why do the polls indicate the people of Australia want a change of Government?

We have low inflation, low unemployment, AAA credit rating. We have an economy of which the rest of the world is envious, and aspires to.  So why are people complaining?

My only conclusion so far is the way the media have reported about the body politic over the last few years.

Yesterday, Fathers Day, I took the 199 Brisbane Council bus – a popular bus service the State LNP is considering cutting back and would love to privatise – to the Brisbane Convention Centre.

On the way I passed through the seat of Brisbane held by Teresa Gambaro. Gambaro scraped in last time.  Former Democrats Senator Andrew Bartlett was the Greens candidate then, and post-election analysis showed took votes from the Labor Party rather than the LNP. Current Labor candidate Fiona McNamara, a former teacher, has been putting in the hard yards for months, but is unlikely to win, despite the Newman factor. He has been mute throughout the campaign, probably on direct orders from HQ.

Along the bus route I saw several LNP placards outside businesses, houses and abandoned buildings but no Labor placards, unlike the last election.

Are the people asleep to the fact that the LNP sacked 20,000 public servants, even those with ‘Front of House’ positions – positions Newman vowed would not be threatened? This came about by the Costello report commissioned by the LNP which cost two million dollars plus.

The Costello report recommended deep cuts across government spending.  One of the very first acts of political payback by the LNP was the cutting of the Queensland Literary Awards, a Bligh/Beattie initiative.  Yet the LNP managed to find off-budget funds to subside ‘A Big Day Out’ event on the Gold Coast to the tune of $200,000 dollars, essentially a big ‘piss-up’ day for teenagers.

When I arrived at the Convention Centre I produced photo ID and go through airport-style security to get to a quarantined area serving tea and coffee to the party faithful, namely the concerned members of the Labor Party.

We were ushered to our seats by member volunteers wearing red T shirts.  The set is  a magnificent set, US presidential style in the round.

A succession of party stalwarts walk in to rousing receptions, including Bob Hawke and the worlds greatest Treasurer and reader of the Redfern Speech, Paul Keating.

Finally the Rudd family without Kevin were announced and applauded and shown to their seat.

Anthony Albanese gave a boots-and-all, passionate hearts and minds speech sticking to Labor’s basic values and emphasising Labor’s plans and accomplishments – getting us through the GFC and investment in roads, skills and infrastructure. He included a commitment to building the Cross River Rail in Brisbane, a project something vital to Brisbane and something the LNP have no interest in.

Teresa gave a compelling speech and was completely convincing to a hushed audience on why Australian should vote for her husband Kevin.

Kevin Rudd PM came out beaming and confident, if  a little contrived.  His speech got to the heart of the facts as to why Aussies should continue to vote for his government. He emphasised over and over that he was fighting for your Jobs, your Schools, your Hospitals and your NBN. Towards the end of the speech the PM announced three new policies:

The PM emphasised that Labor had a plan for building the future whereas Abbott and the Liberals had a plan to tear down what has been built up.

Overall the launch was polished and presidential.  Kevin said in closing that he was the comeback kid and Labor had a lot of policies worth voting for.  He committed himself to working for the very last vote. I am sure he will!

Was it enough to win over the mood of the nation?  Not so sure.

Note: I’ve been a member of the ALP for two years and was a member of the Australian Democrats from 2002 to 2006. I became an active participant in politics following the Tampa event in 2001