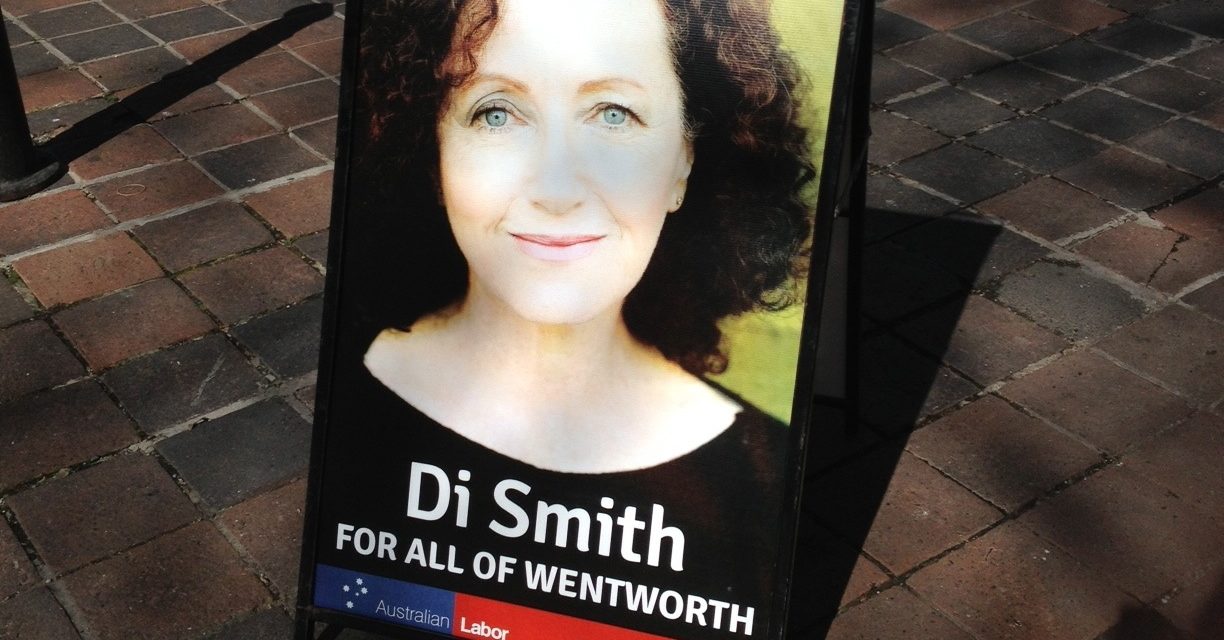 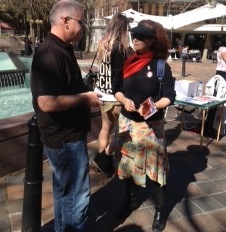 At 22 degrees and sunny, it was a beautiful day at the Kings Cross Organic Market in Sydney, more like spring than winter. The Saturday market is a weekly institution and a favourite meeting place for residents of Potts Point, Elizabeth Bay and Kings Cross.

Locals such as Paul Keating and the “voice of rugby” Gordon Bray, have been seen pottering around the marketplace, along with tourists and neighbourhood characters in all their glorious diversity. The market serves up fabulous food including French crepes, Bavarian bratwurst, French cheeses and organic coffee – a coffee without a lid is intriguingly termed a “bare back”.  Fresh eggs, organic fruit and vegetables, bacon and egg rolls, freshly cut flowers, Turkish gozleme, pork rolls, Mexican delicacies and Argentinian empanadas round out the selection.

Into this idyllic scene of affluent urban tranquility comes the federal election campaign.

Labor candidate Di Smith decided to spend her first Saturday of the campaign to win Wentworth at the marketplace. Politicians always stand by the El Alamein fountain where there’s plenty of room for setting up posters and campaign paraphernalia.  More importantly, it’s a strategic position for greeting foot traffic at the point where sleazy Darlinghurst Road meets stylish Macleay Street.  The juxtaposition is very Wentworth, where the unexpected is around every corner.

This reporter got off to a rocky start with Smith two weeks ago by getting her name wrong because of an error on the ALP website. The confusion sparked a fearsome and conspiratorial response on Twitter.

Today’s encounter with the candidate was unplanned.  I was heading to the marketplace for a spot of pottering and a Saturday bratwurst, as has become a weekly ritual.

Smith agreed to an interview but what followed was more a series of disjointed micro-chats and overheard conversations. She was focused on engaging with voters and her campaign workers and not on the needs of local-citizen journalism.

First she was heard discussing where to campaign next Saturday.  It was decided that an early start on Oxford Street in Darlinghurst didn’t make a lot of sense as locals are not known for starting their Saturday mornings early.  Then there was discussion should it be on this side or that side of Oxford Street.  It was decided the “Gilligans Island” side would be best.

“This is campaign organisation without an office,” Smith said to this reporter.  The Labor campaign for Wentworth is very much about a dedicated small core of rank and file ALP members carrying the flag against the odds.

A passerby remarked to Smith that the sitting Wentworth MP Malcolm Turnbull was “one of the best the Liberals have”.

“He may be one of the best the Liberals have, but he can’t do anything,” was her reply. She described Turnbull as a “fence-sitter” and said she was “very disappointed” in him.

Marriage equality came up – an issue with particular resonance in an electorate with a large gay population.

“I don’t know how he sleeps at night”, said Smith, referring to Turnbull’s support of marriage equality on the one hand and him  having to toe the party line on the other hand. She said that would never happen in Labor, as the marriage question was a matter of conscience.

Smith made clear her general disappointment in Turnbull, saying, “that’s why I’m here”.

At one point while Smith was off chatting with another passerby who was not a fan of immigrants, this reporter and the secretary of the Bellevue Hill branch of the ALP became engrossed in a discussion on asylum seekers. As it wasn’t made clear the discussion was on the record, it can’t be reported, but it would be fair to say there’s some disquiet in the ALP rank and file on asylum seeker policy.

The proposed interview never really got off the ground as it appeared Smith didn’t have time after all. She offered her mobile number so that it could take place in due course. Their duty done, the ALP’s Wentworth team folded up the card table and the A frame signs and disappeared into the dappled sunlight of affluent and cosmopolitan Potts Point.

The Wentworth Community Forum awaits on Monday night. Malcolm Turnbull, Di Smith and Greens candidate Matthew Robertson will be there.