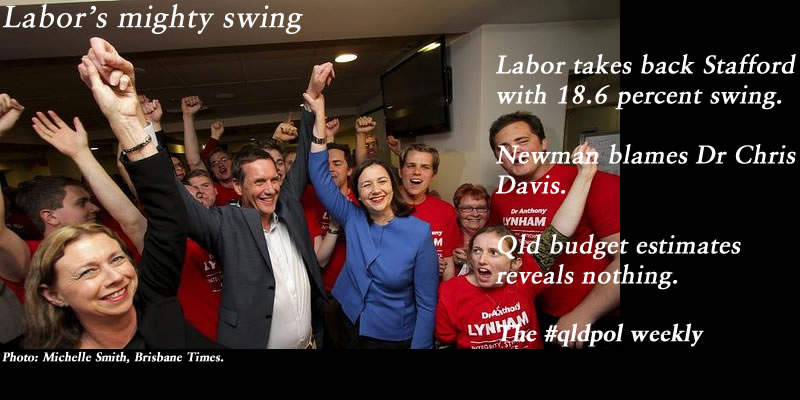 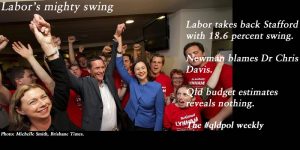 Cracks in the pillar – Tourism figures down.

Cracks in the pillar – Construction down in Central Qld.

Labor picked up another seat on Saturday with a mighty swing of 18.6 percent in the Stafford by-election. It was the biggest swing at a Queensland by-election since the Electoral Act changes of 1992.

Labor had traditionally held the seat from 2001 to 2012 when it lost to the Newman landslide.

It comes on the back of a 17.2pc swing against the Newman Government in the Redcliffe by-election in February.

The seat had been vacated by the Liberal National Party’s (LNP) Dr Chris Davis who had several run-ins with Premier Campbell Newman over changes to political donations laws and changes to the Crime and Corruption Commission (CCC). (Read more on how the Stafford by-election came about at our NoFibs blog).

Polling day descended into a farce with Supreme court action ordering the LNP to remove or hide illegal statements on electoral signage.

It read, “Labor’s candidate lives on the Southside and won’t give up his day job. Don’t vote for a part-time blow-in.”

Labor’s Dr Anthony Lynham, a maxillofacial surgeon, declared during the campaign that he had recently moved into the electorate and if successful would continue to practise to keep his medical certification.

As none of the four candidates were eligible to vote on the day, the event had no real effect on the outcome.

In conceding defeat, Andersen lobbed blame on the campaigning of unions and the former member, Dr Chris Davis.

“In a very short time, we put together a credible campaign and we’ve done so fighting against not just the Labor Party, but union third-party campaigns and also the damage that was done to us by the former member,” he said.

Campbell Newman, whose own seat of Ashgrove borders on Stafford, also blamed Dr Chris Davis for creating the situation.

“Clearly, the attacks on the government by the former member were a factor in this election as well – it did us no favours and did Bob’s campaign no favours,” he told the media.

On Sunday, Newman directed some of the blame toward the electorate for not appreciating his government’s achievements.

“I think the issue is that Queenslanders perhaps didn’t appreciate how much of a mess the state was in, how diabolically bad the finances were,” he said.

Newman has now lost five seats in a little over two years, three from defection & two to by-elections.

The composition of the Queensland parliament now stands at seventy-three seats to the LNP, nine to Labor, three to Katter’s Australian Party (KAP), two to Palmer United Party (PUP) and two independents. Forty-five seats are required to form government. 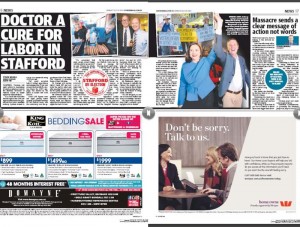 The Sunday Mail dedicated half a double page spread on pages 16-17 on the 18.6pc swing to Labor.

Is this swing to Labor indicative of a problem with the Newman Government or just a natural correction back to Labor?

That question will be answered in around eight months time when Queenslanders all return to the polls in a general election to cast judgement.

Commentators have frequently dismissed the notion of Labor being able to return to government after such a landslide win to the LNP in 2012 which saw them take seventy-eight seats.

Queensland’s The Sunday Mail certainly wasn’t too interested in the result. It dedicated half a double-page spread to the by-election on pages sixteen and seventeen.

With two double-digit swings against the Newman Government in the last six months, it is possible that there are other factors at work in the minds of voters.

With the initial 78 seat majority, Campbell Newman seemed destined for three terms in office. However, with the very real possibility of now only lasting one term, has he burnt up all of his political capital in just over two years?

As ABC’s election analyst Antony Green suggests, a rule of thumb on by-election swings is to halve the figure and apply statewide. That would give a swing against the Newman Government of 9.3pc.

Not quite enough at this stage for Labor to return to government. Perhaps, though, enough to ensure that the next Queensland election will not be a dead rubber.

#staffordvotes – There have been 3 double digit QLD by-election swing in last 20 years, 2 of them in last 6 months

Cracks in the pillar – Tourism figures down

One of the much touted “pillars of the economy” that the Newman Government boasts achievement in is tourism.

However, figures released this week show Queensland’s share of the domestic visitor market had fallen to 22.8pc. The National Visitor survey for the year ending March 2014, showed overnight visitors fell by 2pc while New South Wales rose by 6pc and Victoria by 7pc.

Tourism Minister Jann Stuckey didn’t want to talk about those figures with the Brisbane Times, preferring instead to comment on the period January to March which showed a 4pc growth.

In typical Newman Government style, she went on to blame the Labor party.

“We are taking a long term approach to tourism after Labor mismanagement saw Queensland lose its position as Australia’s number one holiday destination. The government’s strong 20-year plan for tourism, Destination Success, provides a shared purpose and common goal between industry and government to deliver on our targets.”

Whatever the 20-year plan consists off, it’s hoped it’s better than the bizarre Queensland tourism campaign that was revealed this week at budget estimates. The advertisement highlights what people like about Sydney before telling them they should try a holiday in Queensland.

Stuckey was seemingly unaware of the campaign and told the committee she would take the item on notice and get back to them.

You can check out the ad here, “Queensland tourism campaign highlights what people like about Sydney”.

ABC News Qld: Cracks in the construction pillar, down 40pc in Central Queensland.

Cracks in the pillar – Construction down in Central Qld.

Another crack in the “4 pillar economy” is construction which is down in the year to May by 40pc in Central Queensland.

Central Queensland builder, Trevor Shanks told the ABC of an influx of builders from Brisbane.

“In twenty-nine years, this year has been the worst,” he said. “They’re actually coming up here building at Brisbane prices and getting their materials as well, they’re shipping those up instead of buying locally.”

Dennis Bryant from the Master Builders Central Queensland told the ABC that the construction phase of mining was tapering off, leaving builders to find whatever work they can.

“We’ve now seen in Mackay-Whitsunday and Central Queensland a quieting in activity because of the lay-offs in the resource sector and the fear that ‘I might not have a job tomorrow’ so it’s stopped people from having confidence in investment.”

ABC News Qld: Qld Health reveals 50,000 X-rays have not been reviewed properly on the Gold Coast sparking fears the problem could be state wide.

Up to 50,000 X-rays have not been reviewed correctly since September 2013 at two hospitals under the governance of the Gold Coast Hospital and Health Service.

Specialist radiologists did not review patient exams at the Robina and the Gold Coast hospitals. So far, two patients have suffered adverse effects from the failure.

Queensland Health Minister Lawrence Springborg dismissed the problem as an isolated incident and praised the hospital board for taking action on the problem.

“Delays and backlogs in this system cannot be permitted,” he said in a statement.

An independent inquiry will be launched and $1.4 million will be allocated to having the X-rays reexamined externally by a yet to be named private diagnostic firm.

However, Dr Greg Slater from the College of Radiologists warned that the problem could be statewide.

“I think it’s certainly possible it’s happening in other hospitals in Queensland,” he said.

One of the recommendations stemming from The Fitzgerald Inquiry, was the creation of budget estimates. It was a chance for the government to be asked questions about how the public’s money was being spent.

However, this year, the Newman Government changed the rules. Instead of a series of public hearings held with different ministers over seven days, Newman changed the format to seven hearings occurring simultaneously in seven different rooms.

It made it next to impossible for the Opposition, their staff and journalists to cover. Parliamentary staff were also unable to transcribe everything at once, alerting the media to delays in the finalisation of Hansard records.

Both Treasurer Tim Nicholls and Premier Campbell Newman talked themselves hoarse. They sat for six hours instead of the usual three. Without managing to reveal very much, Newman seemed to hail this as a success on the new format.

“So, I know that by the end of yesterday I’d almost lost my voice, so if that’s an indication of the amount of questioning and the answering I had to do I think it’s probably a pretty good one for Queenslanders if they want to get their head around what’s going on.”

Newman spent most of his time talking about Labor, which Brisbane Times state political reporter Amy Remeikis counted him mentioning 76 times in relation to familiar brickbats such as, “so-called reforms”, “$80 billion cloud of debt” and Labor’s “financial incompetence”.

Independent MP for Nicklin Peter Wellington criticised the format labeling it a ‘sham’.

“A total waste of time,” he said. “…It’s an attempt by the government, and I think it has been very effective, to minimise the amount of scrutiny of ministers, director generals and senior departmental officers by having it all on two days, and the evidence speaks for itself.”

Estimates hit a low point with a discussion about how many shower heads had been replaced in the parliament and if there were any plumbers on staff.

Labor has pledged to restore the original format over seven days should it be returned to government.

We have established that there are no plumbers on staff at Qld Parliament House. 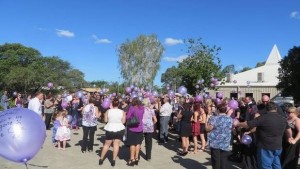 Awful news this week that the final two patients released from the Barrett Adolescent Centre in Wacol, Queensland, have committed suicide. The Newman Government closed the centre in January, saying that patients could be cared for in their local communities.

However, as community based care is heavily reliant on available local services and government funding, parents of former patients of the centre feel this is inadequate.

They are also angry about the lack of consultation by the government prior to the closure.

The family of Talieha (surname withheld at family request) has called for a public independent inquiry after she committed suicide. Talieha had been moved to independent living at Pine Rivers community centre in January. Three months later she was dead.

Talieha’s mother Melinda told the media, “They promised her she would have six weeks of 24/7 care – that’s 24 hours a day care  – and that lasted about two weeks.”

A Cairns mother also told the Brisbane Times of her daughter’s plight since being returned home.

“I couldn’t believe that we would go from 24/7 intensive support to nothing in four months,” the mother said.

Queensland Health Minister Lawrence Springborg agreed to a coronial inquiry into Talieha’s death but was unmoved on Newman Government policy.

“It is just not our policy to build a replacement Barrett Centre because we think there are better mental care options,” he said.

The Labor party has pledged to rebuild or replace the centre should it be returned to government.