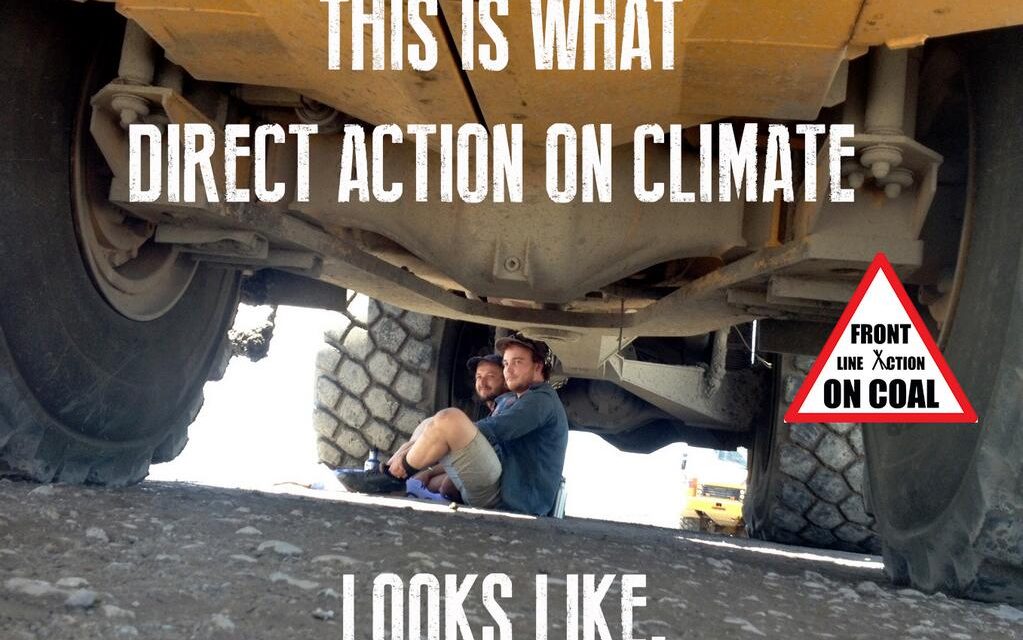 MARGO DISCLOSURE: I am an old friend of Susie Russell, and holidayed with her over Christmas at Elands. I travelled with her to #leardblockade. My twitter report of the day.

On Sunday January 19, 2013, I was at the camp on the Therribri Rd opposite the property known as Velyama, making scrambled egg sandwiches, when the call came that the Aboriginal scarred tree a few kilometres down the road had been damaged with an excavator working in the area.

With my friend Marg we jumped in the car (she brought the sandwiches) and headed down there. When we pulled up, there were a few people standing around and I thought: I’ll just sit in the car and eat my sandwich. Then I heard a huge thump, and saw an excavator whacking the most magnificent, gigantic River Red Gum which had an ‘H’ painted on the front and was full of nesting hollows. The tree shuddered but it was clear it was not going to fall.

I have worked for 20 years on forest related issues. Throughout the forests of NSW an ‘H’ painted on the front of a tree means it is a habitat tree and needs to be protected. I thought the excavator operator was making a mistake. This work was unusually being done on a Sunday. I got out of the car and started walking towards the area. There were no fences, gates or signs to keep out. On the spur of the moment I started to run towards the tree. The excavator operator saw me coming and stopped the machine.

Someone in a hard hat was close behind me and he told the operator to lock the machine and move away, which he did. Around the base of the tree there was a huge hole three or four metres deep. It was of compacted river silt, the walls were not sheer and there were several ways into the hole. I slid down into the hole to touch the tree. I was very distressed about what was happening. I find it inconceivable that at this point in time in human history we treat these ancient beings with such contempt. I have had a lot to do with forests, I know how long trees take to grow and form hollows and this was ‘one big mama’. It would not be exaggerating to say it was already an old tree when Captain James Cook arrived in this land. It would not be exaggerating to say it was at least 500 years old. How can something so irreplaceable be destroyed without anyone noticing?

There were other people there by then, and someone said: “You could lock on to this root”, and I thought: ‘yes I can’. I have never done that before and the idea of being locked to something by the neck is one I find quite terrifying, but in that moment it seemed like the right thing to do. A bicycle D-lock was produced, I got myself on the ground, and, although it was a very tight fit, managed to get the lock on.

Someone put an umbrella over me for shade, someone else asked about food, someone called for a banner and one person took photos and I heard another speaking on the phone to tell someone at the camp what had happened.

People were moving around the hole and earth trickled down on to my face and hair and in my ear. Marg suggested that everyone but us get out of the hole.

It was a very uncomfortable reality. The lock was so tight that I had to pull down on it with my hands to be able to draw a breath, even then I could only draw very shallow breaths. My mouth was dry but I could barely swallow. My dear friend Marg, who I know feels for the trees with all her heart and soul, sat beside me and trickled water into my mouth from a bottle cap on request. I could swallow only a couple of small sips at a time. About the third time she gave me water it went up my nose and I spluttered and nearly choked. After that she got the technique right every time and every five minutes or so administered those sips that calmed but couldn’t quench my thirst. Talking was difficult, so mostly I was silent or communicated with a whisper to Marg.

It was 40-degree heat but we weren’t in the full sun, being sheltered somewhat by our glorious tree and the cool earth beneath me provided some relief too.

Not long after the police arrived. They stood at the edge of the hole with other men in hard hats and asked questions. I couldn’t answer. Marg tried to explain and gave our names and dates of birth. The policeman told everyone to leave the site except the mine workers and except Marg who was looking after me in the hole and another man who offered to be our police liaison.

I wanted my action to make a difference. I wanted people to hear this tree fall. I wasn’t going to just get up and let them get on with it. I had seen other people cut off similar locks and thought I could handle that. I was certainly prepared to be arrested. A small price to pay to gain some attention for the wanton destruction of our life-giving land and water that was happening all around me.

Time passed. Some man from the mining company stood at the edge of the hole and ranted at me. There was talk of the edge of the hole collapsing. There was talk the tree was about to fall. Obviously I didn’t think it was going to fall – it had been resisting their efforts to knock it down and dig it out. I felt the tree was my friend and the earth was my mother and they would look after me. I tried to stay calm and asked for another sip of water. But I knew inside it was a dangerous situation and I was scared.

Marg hadn’t wanted to get into an arrestable situation. She had said at the beginning that when that happened she would have to leave … but as time passed and my dependence on those sips of water increased, she didn’t want to leave me.

After some time, when I had been ‘locked-on’ for about 2 hours, the policeman came to the edge of the hole and said police rescue was unavailable but had authorised the local SES or VRA (Volunteer Rescue Association) to do what was ‘necessary’. An ambulance officer appeared at the edge of the hole. Marg was told to leave, she said she couldn’t leave me while there was no-one to look after me and asked the ambulance officer (Tanya) if she could look after me, but she said she couldn’t come in to the hole.

The police said the local SES would look after me, and they proceeded to put a ladder down the hole. So, with that commitment given and thinking that she would be allowed to leave the site without being arrested, as was stated earlier by the police constable, she climbed out of the hole and was immediately placed under arrest. For the first time in 2 hours I yelled ‘that was unfair…’ and someone said ‘so you can speak’. I asked for water and they did nothing, eventually they sent an SES man (John) down the ladder to check if I was actually locked-on to the tree. He said yes, I was attached by a D-lock to a tree root. I again asked for water. After about 20 minutes without water John gave me 2 bottle caps of water and then stepped back.

Then someone spotted a black snake and there was general banter that they would throw the snake into the hole with me. I asked for water and was ignored. Then someone threw one end of a rope to John and told him to tie it around my leg – they joked about trying to pull me out. I yelled that they were not to pull on the rope as my throat was already under pressure. Then one of them said to John to tie it around another exposed tree root. They said: “It’s for when the tree falls, the rope will tell us how far to dig to find your body.”

It was clear to me that I was not dealing with a professional, politically impartial outfit such as police rescue. These guys were part of the mining club. I wanted to get out. I asked that my husband be allowed down to use an angle grinder to cut the lock off, but was told that wouldn’t be possible.

Shortly after someone appeared with the key to the lock. What relief!

Constable Stow unlocked the lock and helped me to my feet. He told me I was under arrest. I was light-headed and unsteady. I slowly climbed the ladder and was lead away by the ambulance officers (Tanya and Cheryl) to be checked over.

Sitting in the back of the ambulance I started to sob. Tears of relief for me and pain for the tree and our amazingly beautiful planet that is being hacked and fracked to death. The tree was bashed to the ground by the excavator. My only consolation was that more people heard it fall because of my spontaneous and somewhat rash action.

I could only take shallow breaths and small sips. My blood pressure and pulse were high. After a while we drove to the Boggabri Hospital. The nurses on duty were kind and professional – thank goodness for the public health system that the earth destroyers would also like to dismantle. My throat was bruised and swollen. I was given painkillers, an ice pack and examined by the doctor who I think may have come in especially.

After a while I was ready to accompany the patiently waiting Constable. I was put in the back of the paddy wagon (and had to insist on being given water as I was still dehydrated). When I arrived at Narribri police station Marg was in one custody box and I was put in the other. The custody officer was friendly and the police who were working on the charge sheets were respectful. No-one complained about the protests or its effect on policing resources.

After about 3 hours we were fingerprinted, our mugshots taken, our possessions returned and our charge sheets and bail conditions handed over.

We were charged with hindering the working of mining equipment and given bail conditions that stop us entering Leard, Pilliga or Jack’s Creek forests (where the CSG protest camps have been operating). We were told to not approach or enter any Boggabri Coal easements or infrastructure and given 24 hours to gather our possessions, say our goodbyes and leave the Leard forest.