Leaving Adelaide ‘as is’ 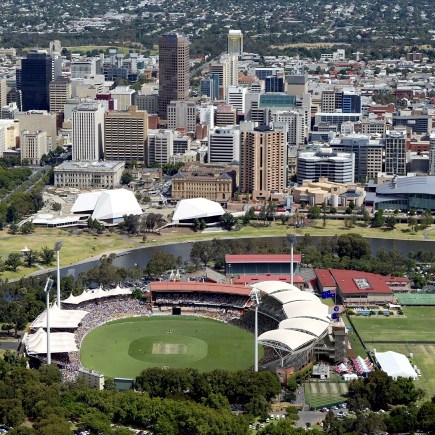 Margo: In twitter conversation on WA election night I asked Victoria Rollison to write a piece for me on the political vibe in South Australia. She replied: ‘Here is the post that my mum and I have written together. Mum and I have never written a post together before so it’s interesting that we not only survived this experiment, but found we quite enjoyed it. When you said you would like an SA perspective, we realised that we already had an idea for such a post, so I hope this fits the brief. It’s a bit different to what you’ve already got, but we’re hoping it’s an example of citizen journalism from a local viewpoint.’

There is an in-joke in Adelaide that SA’s main exports are wine and university graduates. When the parents of twenty-somethings run into each other at the supermarket, they never ask ‘how are your children?’ They ask ‘where are your children?’ The answer is quite often Melbourne, Sydney or even London. It’s not that teenagers and young adults don’t enjoy living in Adelaide. It’s not that their parents don’t have plenty of space for them until they are ready to move out. It’s just that there are more jobs, and more exciting opportunities to be found elsewhere. Big companies are few and far between in Adelaide. Head offices are in Melbourne or Sydney. And yes, there is an element of ‘it’s a small town, get me out of here’, at play as well.

Kay’s three children all left Adelaide soon after graduating from university, part of the well-known ‘brain drain’ from south to east. One moved to Melbourne, where she will remain, with a better job than she could find in Adelaide and a Melbourne-born husband. Two moved to Sydney, but after eight years, moved back to Adelaide with interstate fiancés in tow. One of each couple had already found a job in Adelaide, which made the move possible, but it took some time and much anxiety before the other two found suitable jobs in their areas of expertise. Each couple was able to buy a family-sized house, unaffordable in Sydney. Their lifestyles are now more relaxed, their commutes shorter and overall they are all happily settling down in Adelaide. But will the next generation of Adelaidians be as lucky? Where will the jobs and houses be for them?

For there is one thing that the recent returnees have noticed about Adelaide: there is entrenched resistance to change. This is a major stumbling block to the development of the city – both economically and socially. It’s the attitude that ‘Adelaide is a great small city and I like it the way it is and always has been.’ But at the same time, Adelaidians want the city to provide them with jobs, theatres, cafes and nightlife. They see no contradiction between their peace and quiet and their lattes.

Victoria saw this attitude when talking to a friend of her own age about the Adelaide Oval. Historically a cricket ground, Adelaide Oval is being redeveloped by the State and Federal governments as the home of South Australia’s two AFL teams. It was the South Australian Cricket Association members – a representative sub-set of the old Adelaide establishment mindset – who were to decide by a vote requiring a 75{17ac88c265afb328fa89088ab635a2a63864fdefdd7caa0964376053e8ea14b3} majority whether the redevelopment would take place. Victoria’s friend, a SACA member, was voting against the development proposal because it would mean more traffic in the adjacent suburb of North Adelaide. The friend also objected to the oval being changed, as it was ‘historic the way it was’. Victoria couldn’t help finding this opposition frustrating. The oval was not often used and attracted very few cricket fans. In winter it was essentially mothballed. She thought keeping Adelaide Oval the ‘same as it always was’ was only really going to benefit the very small number of people who had members’ tickets or those living comfortably in a traffic-free North Adelaide.

Thankfully, and somewhat surprisingly, the development was approved and the Adelaide Oval project has created hundreds of construction jobs at a time when the industry desperately needed them. Adelaide will soon have a world-class sports stadium which will also bring a flood of new business into the CBD’s shops, bars and restaurants throughout the football season. And of course the historic scoreboard and heritage grand stand will remain key features of the oval. Old and new can work perfectly well together.

Kay had a similar experience when a friend urged her to protest against the State government and the local Council because of some zoning changes in her local government area. She declined, because the zoning changes are the knock-on result of a planning policy she agrees with. She might not be 100{17ac88c265afb328fa89088ab635a2a63864fdefdd7caa0964376053e8ea14b3} in favour of what is built as a result, but she can’t in all conscience oppose a policy which aims to meet the housing needs of future Adelaidians in ways that will do the least damage to the things about Adelaide that people value.

The State Labor government’s planning policy is an attempt to curtail the expensive and socially divisive suburban sprawl which already extends nearly 100kms along the coast up from Aldinga in the south, and across the northern plains to Gawler, dangerously close to the Barossa Valley’s vineyards.

In place of the old fifty-fifty division, the policy requires that only 30{17ac88c265afb328fa89088ab635a2a63864fdefdd7caa0964376053e8ea14b3} of new housing development be at the margins, with 70{17ac88c265afb328fa89088ab635a2a63864fdefdd7caa0964376053e8ea14b3} in existing suburbs, which are already serviced with transport, schools and shops. Planning at the local government level has to take account of this requirement, as well as targets for low cost housing and sustainability. After some to-ing and fro-ing, Councils agreed on how they would carve up the thirty year target for new housing between them. The Council area Kay lives in got quite a small allocation, because it is already densely settled, and most of the houses are ‘heritage’ or ‘character’, meaning built before the typically cheap and nasty stuff that has gone up since the 1940s. It is, however, affected by another State government planning decision to allow buildings up to ten stories in some specific locations within 1.5kms of the parklands that surround the city of Adelaide.

So Kay’s friend is objecting to a strictly limited number of ten story buildings on some main roads, and some buildings up to four stories in a few selected parts of a Council area. In particular, her friend is outraged that some four story apartments may be built adjoining the Torrens River Linear Park which runs through the district. But how do you get people who have traditionally favoured living on quarter acre blocks to live instead in medium density housing? You put that housing where people want to live – for example, on the edge of the city, or near a nice river park. It’s not rocket science. Kay understands that her friend wants the best for Adelaide, but her objections look a lot like the Not In My Back Yard syndrome.

It’s simply not possible for Adelaide to stay the way it is. It’s either change to accommodate an expanding population – even if the expansion is slow – or wither as the population ages and dwindles. And there aren’t enough houses being built to satisfy demand as it is.

Kay’s friend might have had a better argument if she pointed out that in suburbs like Kay’s, what gets built will not usually be affordable by new entrants into the housing market. However in a very interesting post, Matt Cowgill makes the point that you can’t have population growth, restriction of sprawl, tightly restricted development in existing areas and affordable housing. Cowgill presents a very elegant argument to the effect that building for the top end of the market – ie less restricted development in existing desirable locations – actually helps lower the price for everyone else. He says that if you build mostly at the bottom end, then those houses are snapped up by people who could afford to pay more, at the expense of those who can only afford the cheaper housing. (This was certainly the effect of the first home owner’s grant.) In any case, there will be more medium density building in other Council areas, and more low cost at the margins; it’s more a question about whether change is visible to those who already enjoy the benefits of an inner city life style.

Whether the old can be blended with the new in Adelaide is partly an aesthetic question: can developers be required to integrate their new medium density buildings into existing streetscapes? Planning regulations can only go so far. But the shape of Adelaide is also a political question. Kay is annoyed that her friend is using local planning decisions to attack the Labor government. So what could this friend look forward to under a Liberal government? As far as we can see, they would go back to the fifty-fifty split – as the Liberals did in Victoria – and release more land on the margins for development. This isn’t letting the market run free – it’s just altering the regulatory balance to favour the older and better off home owners of Adelaide over the younger and poorer aspirants. All the NIMBYs would be happy.

This post is written by Kay Rollison, resident of Adelaide for over 60 years and her daughter, Victoria Rollison, who has spent eight of her 31 years living in Sydney. Victoria returned to her hometown of Adelaide a year ago.