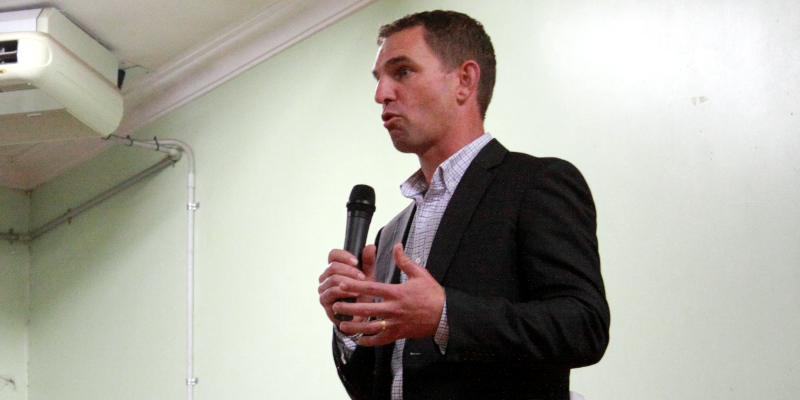 The Liberal candidate for Indi Steve Martin has refused to answer questions about his campaign’s collusion with Cory Bernardi’s far right Australian Conservatives, or his support for brown coal power stations, when asked at Wodonga pre-poll on Saturday.

No Fibs: So you’re refusing to answer any questions on anything, is that it?
Martin: Yes that’s right.

Full transcript and audio below

Last Friday, while reporting for No Fibs I caught a senior member of Martin’s campaign team setting up pre-poll at Wangaratta for Bernardi’s Liberal breakaway party Australian Conservatives, placing the parties’ signs side-by-side.

I contacted the state branch of the Liberal Party on the same day for comment, and was told they would call back; but because there was no response (and still hasn’t been one), I decided to try getting answers in person.

The following day at Wodonga pre-poll, when I approached Martin for comment his minder attempted to keep me away. I stood my ground, keeping my attention on Martin while asking him questions, but the minder put pressure on my shoulder with his hand to move me away.

I resisted and kept up the line of questioning in the audio clip.

Why are you campaigning to elect Australian Conservative senate candidates instead of Liberal Party candidates?

How do Victorian Liberal Party senate candidates feel about their campaigns being undermined by your campaign working to elect senators for another party?

Was your campaign team’s collusion with Cory Bernardi’s Australian Conservatives sanctioned by the Victorian or national executive of the Liberal Party?

Apart from Wangaratta branch members, who in the Liberal Party knew about and/or approved of your campaign team colluding with Australian Conservatives?

No Fibs (Me): You’ve called for new coal fired [interrupted].
Martin’s minder: Move along mate you’re not talking to him.
Me: Why not?
Martin or Minder (unsure which): Crack on.
Me : You’re not gonna talk to media?
Minder: Nah.
Martin: Not to you.
Me: You’re not gonna talk to media?
Martin: I think you’ve shown your stripes mate. You’ve shown your stripes.
Me: You’re not gonna answer any questions?
Minder: Your last piece was pure slander.
Me: No it wasn’t.
Minder: No it was.
Me: That wasn’t slander, I got a photo of you [Liberal campaign team] setting it [Australian Conservatives pre-poll] up.
Minder: Thanks for coming.
Me: That wasn’t slander. So you’re refusing to answer any questions on anything, is that it?
Martin: Yes that’s right.
Me: So you’re refusing to answer, you’re just gonna take The Border Mail’s fluff pieces, yeah?
Martin: You’ve had your go.
Me: I’ve had my go?
Me: So you’re not gonna answer any questions about colluding with Australian Conservatives?
Martin: If you wanna write your silly conspiracy you can do it on your own.
Me: Yeah? You’re not gonna answer any questions on coal?
[Martin turns back, engages a voter]Me: Oh well there you go.
Minder: Sorry mate.
Me: Don’t don’t don’t … … don’t put your hand on me like you did before.
Minder: Oh on your shoulder, yeah okay, sorry if you don’t like that.
Me: No I don’t like that.
Minder: I also don’t like you recording without actually getting permission.
Me: I don’t need permission.
Minder: What, to record someones voice?
Me: Yeah.
Minder: No, yes you do.
Me: No I don’t.
[Martin turns back to face me]Me: So you’re not gonna answer any questions about your colluding with Australian Conservatives?
Martin: I’m pretty sure you’ve asked the question three times and got the same answer.
Me: Okay.
Martin: Off you go.
Me: Yeah.

In 2013, when the former Member for Indi Sophie Mirabella lost to Cathy McGowan, she also refused to engage with No Fibs — But Sophie, @jansant IS a constituent and others are reading his posts.