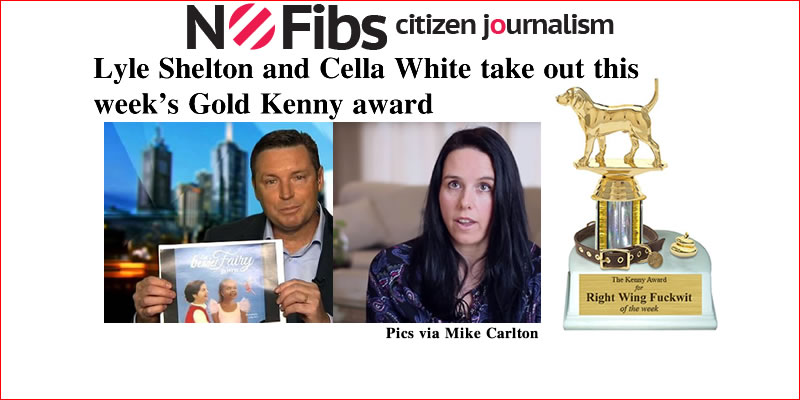 Marriage equality is the topic of this week’s Gold Kenny award. 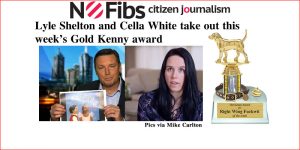 The Mike Carlton inspired Gold Kenny award for this week has been awarded to the Australian Christian Lobby’s managing director Lyle Shelton and anti-marriage equality campaigner Cella White for their ‘No’ to marriage equality advertisement effort.

In the ad, Ms White claimed that her son was told by his school that he could wear a dress. This was given as a reason why Australians should vote ‘No’ in the upcoming postal survey on marriage equality.

However, Frankston High School principal John Albiston, where the schoolboy attends, disputed the claim saying, “We followed that up with classroom teachers of the boy – never has that been said by anyone.”

Mr Shelton tweeted that Ms White’s children were sure of what they heard.

Mr Shelton also congratulated the Mums for speaking up.

The brave mums fronting the C4M ad are paying a high price for speaking up. It should not be like this. https://t.co/xI9r1oULZi

i dunno man maybe this whole thing is going too far pic.twitter.com/f4YgAFbcBo

Noting that her son will forever be aware that his mother chose to brazenly lie in a national ad campaign. pic.twitter.com/9APi8i2KHj

Many Tweeps also pointed out that Liberal Party member and Marriage Alliance spokeswoman Sophie York appeared in the ad.

This is Sophie York.
IPA member and Liberal Party supporter.
Google her! All online. pic.twitter.com/cHAJlTS8vB

Ms York also made headlines at the July NSW Liberal Party convention for her claim that, “not everyone with a low IQ votes Labor”.

In April, Ms York also claimed on ABC News that the marriage equality campaign could be an occupational, health and safety issue.

The ad also inspired a parody hosted on The Guardian and featured columnist Van Badham; ‘My child is a bird’

'My child is a bird': parody of Coalition for Marriage's no campaign ad – video https://t.co/RtzMZGCJC0

The Project also parodied the ad.

We reveal the raw tapes of the candid conversations from the first 'No' vote campaign ad… #TheProjectTV pic.twitter.com/foN4MHqCda

Other contenders for the Gold Kenny this week

Jesus wants me for a sunbeam. And a fucking fine sunbeam I would be ! Greggie Sheridan's fab #goldkenny entry pic.twitter.com/NwP2gwYFav

It's not a #goldkenny week without some globs of guano from the Parrot ! pic.twitter.com/YnFykwJnv5

So come on down Chris Dore, Editor of the Daily Telegraph and our very worthy Right Wing Fuckwit Of The Week ! #goldkenny pic.twitter.com/n8KAPwvRYU