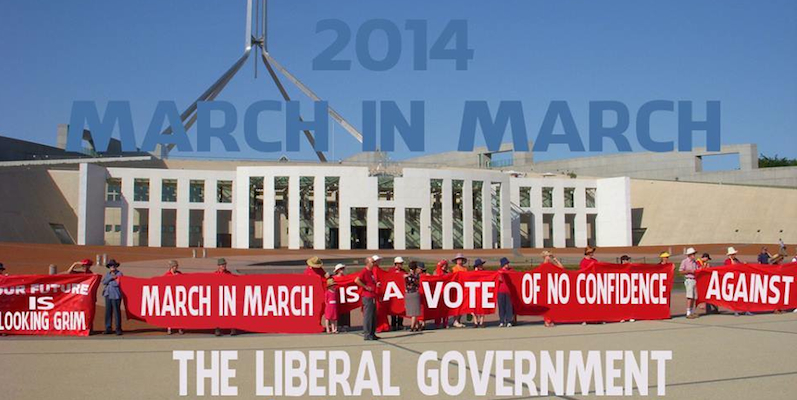 ”March in March Australia 2014 will be three days of peaceful assemblies, non-partisan citizens’ marches and rallies at Federal Parliament and around Australia to protest against government decisions that are against the common good of our nation.”

The No Fibs CJ reported into the hashtag #NoFibsMiM

“I am not a racist! But…” We have all heard it and many of us have said it, but what does it mean? Australians are, for the most part, a pretty decent lot. We love the larrikin, the underdog and the idea of a fair go. However, just as there is always another side to […]

During #MarchInMarch homeless man Bobby with his trusty mate Buster the dog approached me and asked if I wanted a story. He told me they’ve been living on the streets of Melbourne for 10 years waiting for public housing. Bobby invited Prime Minister Tony Abbott (@TonyAbbottMHR) to sleep rough with him for one night […]

Over the weekend a ripple of panic went through the social media in Australia. I was alerted to it by one of my Twitter friends. Word was that Vanessa Powell, described on her Twitter profile as a “refugee supporter”, had been sent two anonymous tweets by the Department of Immigration and Border Protection. They could […]

Senator Christine Milne, Leader of the Australian Greens National Press Club Address, 1 April 2014 I begin by acknowledging the Ngunnawal and Ngambri peoples the traditional owners of the land on which we meet and acknowledge their elders past and present. And in doing so, I commit to the constitutional recognition of our Aboriginal and […]

A cross-post with the Australian Independent Media Network. The Marches in March continue to glow with controversy. Never did so few gather so many, without engaging the usual suspects of the old media, the political parties, NGOs, the unions and the activist groups. There had to be a dark side to these events. The people can’t […]

March of the open-hearted: @Sally_Owl tells the inside story of #MarchInMarch

I started writing this on Tuesday, March 18, 2014, on a flight home after attending March in March (MiM) Melbourne last Sunday, and MiM Canberra on Monday, March 17. I am still giving thanks, six days later, for the miracle that ensured MiM 2014 was a great success, that the vision I had for the marches […]

[clear] By Jim McCool  @coolmccool Last Sunday, despite a thunderstorm and torrential downpours, thousands of Sydneysiders joined the #MarchInMarch protests. According to some media reports, this was a march of leftist extremists, the usual parade of tree-huggers and soap-dodgers. I do not believe that to be the case. I was there. My family was there. I […]

Story & Photos by Trevor Worsley  @WorsleyTrevor   23rd March 2014 I am not a political activist. I have never been to a protest or demonstration of any kind. I had long considered myself a swinging voter, trying at each election to make decisions based on issues and not slogans or political spin. Gradually, over the past […]

By Wayne Jansson  @jansant 23rd March 2014 Roll over photos to read captions or click for slideshow. Read More from the March In March Archive

By Wayne Jansson  @jansant 20th March 2014 It’s normal to start a story at the beginning. I’m going to start smack bang in the middle with this one, as it sums up one of the many factors which forced 100,000 plus people to MarchInMarch (MiM) around Australia. I say forced intentionally. People don’t take to the streets in […]

Sssshhhh, don’t tell the media, but politics is changing from the ground-up, by @ariadne_syd

Ariadne Vromen, @ariadne_syd Source: The Conversation University of Sydney 21st March 2014 Political participation in Australia will soon be about hope – and the transformation of citizenship engagement in this country. Here is why. Traditionally, Australian political participation was centred on, and supported by, the electoral system, political parties and major political organisations. Most media commentators tend […]

By Wayne Jansson  @jansant 20th March 2014 Roll over photos to read captions or click for slideshow. Read More from the March In March Archive

[clear] By Jenny Bates  @jenoutwest, 17 March, 2014 Our journey to March in March began Sunday morning on a standing room only train to Melbourne – amazing, considering not an AFL colour could be seen. It was obvious this march was going to be big, and it was.  As more people squeezed in at each stop, […]

Storify: From the red heart @Amanda467 on #MarchInMarch Alice Springs

[View the story “From the Red Heart: A First Time Protester” on Storify]   Read More about Amanda Markham and more from the March In March Archive

#MarchinMarch report from Newcastle by @Sikamikanico

By Nicola Bell  @Sikamikanico Source: Sikamikanico Blogs 18th March 2014 After all of the build up to the March in March, I nearly ended up not marching at all. First I was supposed to be marching in Newcastle, then it looked like we’d be in Sydney, then Sydney was cut short but I was having niggling health issues […]

By Mary Lucas 17th March 2014 [dropshadowbox align=”none” effect=”lifted-both” width=”650px” height=”” background_color=”#ffffff” border_width=”1″ border_color=”#dddddd” ] Attention: Jon Faine  Subject: #MarchinMarch Dear John, You took three calls this morning regarding MarchinMarch, two of which concentrated on the ratbag fringe and distasteful signs. I get the feeling neither of these callers actually went to the March, if they […]

[View the story “How the West was run: #MarchInMarch Perth” on Storify]   Read More from the March In March Archive

Marching for the Lucky Country: @Trixie_Boo reports on #MarchInMarch Perth

KnitWit PM. Humour and creativity #MarchInMarch #NoFibsMiM Perth pic.twitter.com/eJF7XYZb4K — Reezy Miller (@Trixie_Boo) March 16, 2014 By Reezy Miller  @Trixie_Boo 17th March 2014 Depending on which way you lean politically, the idea of living in one of Australia’s safest political seats – state and federal – may alarm or delight you. I’m fortunate enough to live in the […]

By El Gibbs  @bluntshovels 17th March 2014 Over 700 people gathered in front of the historic Carrington Hotel in Katoomba on Sunday to protest against the Federal Government, spilling out onto the street. Many hand-made signs featured, with slogans such as “What happened to taking care? Of ourselves, each other, our country”, “It’s not money […]

By Kevin Rennie  @kevin_rennie 17th March 2014 Someone asked me what purpose protesting on the streets would serve just six months after an election, especially about a very wide range of issues. A quick look at video of Melbourne’s March in March may help to clarify its importance at a time of growing government secrecy and […]

Storify: A concerned nation shouts to its Parliament #MarchInMarch

By Dean Hepburn  @deanhepburn March 17th 2014 The drone flying over the March in March protest at Port Macquarie was an ominous portent of the direction the Abbott Government is fast taking Australia. Everyone marching was observed to look at it and smile, as though they felt Big Brother was watching over their shoulder. Despite it, […]

[View the story “Abbott, Newman no firm favourites in Bris Vegas #MarchInMarch” on Storify]   Read More from the March In March Archive

By Wayne Jansson  @jansant 15th March 2014 After hearing rumours Billy Bragg (@billybragg) would be performing at one of the March in March (MiM) events, I contacted his publicists in both Australia and the UK hoping to get a few words out of the legendary musician and social justice campaigner. At about the same time I got confirmation […]

By El Gibbs  @bluntshovels 13th March 2014 Asylum seekers, the environment and funding for community services were all reasons given by people planning to attend the Blue Mountains March in March this Sunday. Rachel Higgins, from Springwood, is 17 and wants: “The best for the country and for me when I grow up”. She is worried […]

By Wayne Jansson  @jansant 13th March 2014 March in March (MiM) has now grown to 31 events across the country, the main Facebook page has more than 42,000 likes, and growing. Last week The Border Mail ran a story about an MiM event for Wodonga, Victoria, claiming it was being organised by North-East Border Trades Hall. MiM organisers have been extremely […]

By Anne Carlin  @sacarlin48 11th March 2014 The time is drawing nigh. March in March 2014 is happening this weekend in 29 locations across the nation, and then on Monday morning, the big one takes place in Canberra. You can check out the details of all the marches here. Many of you might be wondering what are these […]

Ariadne Vromen: March in March: the old ways of doing politics are under challenge

Peter Barnes: #MarchinMarch deniers – in speaking you show your unease

If the MIM were the irrelevant, easily dismissed non-event you claim it is, why are you all going on about it so long, loud and vehemently?

Fatima Measham: We will protest on your behalf

We are, pardon the hyperbole, under siege – in case you hadn’t noticed.

Van Badham: March in March marks the birth of a new kind of activism

Political parties are no longer the channel of activism in this country; they have become its target.

John Birmingham: Will you miss us when we’re gone?

That you won’t care, and that there will be no reason to care.

Perhaps the Fourth Estate might like to provide some analysis that reaches beyond their cosy and simplistic left-right, party political view of the world?

Wendy Bacon: Why I Supported March In March

March in March was a resounding success because of its diversity, not in spite of it.

Jenna Price: Pay attention, PM, else it may be at your peril

”You’ll never believe what happened next.”

This is a government that actively and extensively lied before the election.

Bolt, you’re the enemy of civil political discourse. You’re not a journalist but a propagandist & hatemonger.

The Shallow Side: March in March – the end of mainstream media for a generation

Guardian conveys variety of people & issues at #MarchinMarch – many had never attended a protest before. http://t.co/oHvlpaozMV

If MSM don't/won't cover #MarchinMarch it doesn't diminish the action or its significance.Rather it highlights MSM's increasing irrelevance.

After recording & watching #MarchinMarch via @SBS @abcnews @SkyNewsAust @Channel9 the only real place to get news is from citizens. #auspol

With the internet, MSM failure to report huge demos like #marchinmarch doesn't black out news. It just undermines their credibiity. #auspol

The #MarchInMarch was a non-event, sniff condescending journalists. "We define what politics is and where it happens." Famous last words?

Sortius’ March in March 2014 Speech, Melbourne from Sortius on Vimeo.

NOT IN OUR NAME from OPTICAL ALKEMI (J.Dujon.P) on Vimeo.

March in March Alice Springs from Matt Woodham on Vimeo.

“When we all throw Abbott out”

Lachlan Phillips explains why he is marching

#marchinmarch Sydney. Why is a MAN the Minister for Women?? pic.twitter.com/cNktUqSLyK

Indigenous issues among the many represented at #MarchInMarch today in Melbourne and across Aus #springst #auspol pic.twitter.com/EbggsBaJIB

Billy Bragg " #MarchInMarch is grassroots, people on the street expressing their anger. It’s what we need" http://t.co/5kYtXtEBvY #auspol

Today was my first ever protest & the result of a lot of hard work. I'm so proud to have been able to #MarchinMarch! pic.twitter.com/Wnjute7ksD

@TaraNipe Today I marched for the first time ever at @marchinmarchgos – chatted with some great people. #MarchInMarch – Just do it! #AUSpol

Yep first march for me too It's time to make a stand. #auspol #share #marchinmarch http://t.co/IRJqCbzutF

I will be marching tomorrow for asylum seekers, workers rights, Tassie forests, the Great Barrier Reef and marriage equality #MarchInMarch

The turn out today was incredible! Thanks for joining us to #MarchinMarch! #auspol pic.twitter.com/bIV2lG1SZC

Well,I've made my sign for #MarchInMarch tomoz in Newcastle.It's a bit amateurish I know but it's how I feel. pic.twitter.com/fOB0PMHbP1

Look what I found on Wodonga #MarchinMarch facebook page. #leardblockade is making news all over the place this week pic.twitter.com/Tm6n1dW8w3