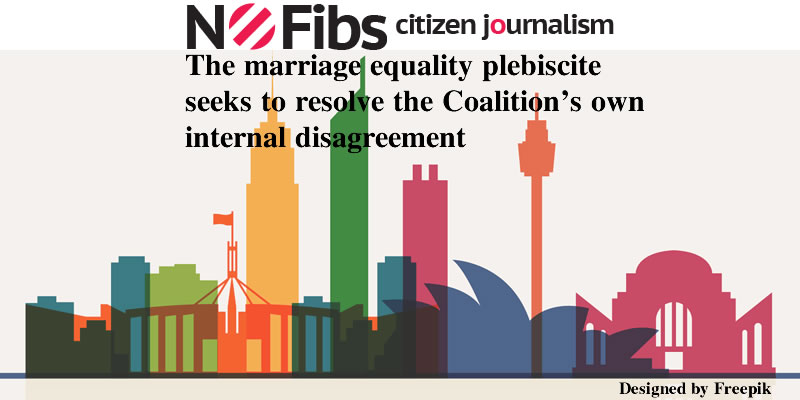 The federal government is asking the people of Australia to resolve an internal party disagreement over same-sex marriage by conducting a plebiscite.

We know this because Queensland Coalition MP for Dawson, George Christensen, doesn’t support same-sex marriage. Only yesterday he Tweeted his joy at Labor for “scuttling the plebiscite”.

We know South Australian Coalition Senator Cory Bernardi would refuse to honour a majority “yes” return vote on a plebiscite by voting against any same-sex marriage bill in the parliament. As recently as last week he attempted to bait marriage equality campaigners with a Tweet about his 20th wedding anniversary.

We know that Prime Minister Malcolm Turnbull supports same-sex marriage because he writes and tells us about it constantly.

It is not the role of the people to resolve any internal issue of a political party. The use of public money to sway voters one way or another is gross misappropriation.

If the government is seeking a constitutional change then it must seek approval from the people via a referendum. Marriage equality does not fit this criteria because it requires a change to an act of parliament. The question of marriage equality must be put to the House. If it is defeated then all of nation’s political parties can state their position in the lead up to the next election.

When Labor’s Terri Butler and Mark Dreyfus met with Attorney-General George Brandis in Brisbane yesterday it felt as though though  George Christensen was in the room.

It is an irrefutably ridiculous situation we find ourselves in. If the Prime Minister can’t articulate the government’s position because he/she fears reprisal from the backbench then it only serves to demonstrate an incapacity to lead the nation.