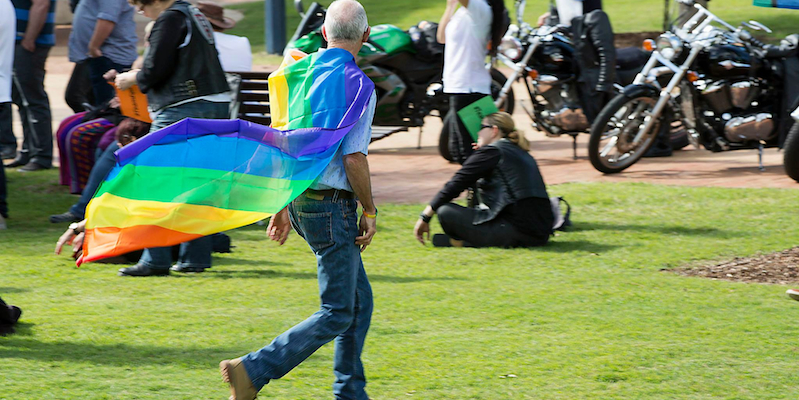 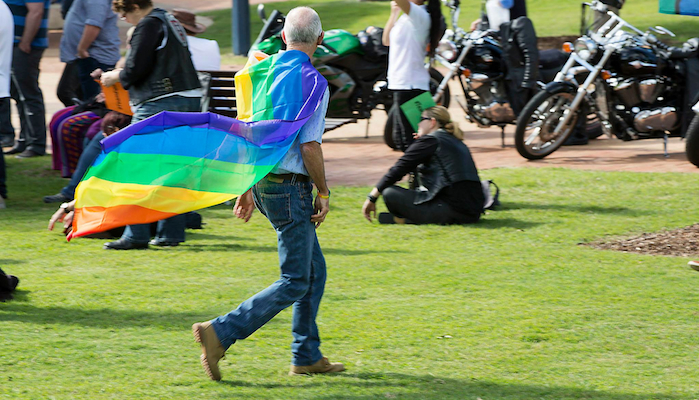 The biggest political football of his government has been booted around by parliament again. There’ll be a few free kicks when the cross-party marriage equality bill comes before parliament, but Abbott’s moved the goalposts already, so none of the players will score.

The Australian with the highest hope for the Liberals on this issue – and at the greatest risk of being disappointed by her party – is Tony’s sister Christine Forster, a Liberal councillor for the City of Sydney.

She optimistically submits to interviews whenever she feels we are approaching a breakthrough. She’s also good-natured enough to engage in jokes about her brother, yet not hide her disappointment.

But it was Christopher Pyne who was this week’s highest-profile and most confident Liberal when it came to marriage equality, although his hopes for a free vote blinded him to a classic Abbott battle manoeuvre.

When the Prime Minister opened the discussion to the entire Coalition party room, including a wall of National Party MPs whose homophobia was guaranteed to bring out the same in everyone but moderate Liberals, Pyne’s reported response was shock. He then dashed through the media with the kind of sibilant schoolboy anger that often stereotypes him as gay.

As the dust settles, it’s clear marriage equality will remain just a high hope on the never never, that place where Australians know nothing will change in the short term.

I could analyse the chances of any of the dangling carrots – referendum, plebiscite, binding or free votes – but that would be to engage in the kind of hope Tony Abbott wants from me.

Progressives and moderates are good at hope, and at home in the southeast Queensland electorate of Bowman, there’s been plenty of it ever since Liberal MP Andrew Laming started filling letterboxes with his annual survey back in June.

Only one person per household could fill it out, and it didn’t mention marriage equality, just it’s poor cousin so beloved of right-wing religious Liberals – ‘gay marriage’ – which presupposes same-sex attracted people want something special, like ‘gay supermarkets’ or ‘gay sports ovals’. 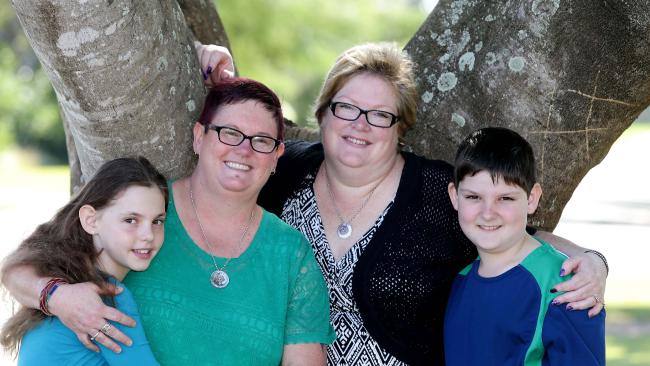 “I was aware, in previous years, people had reported not receiving the survey and had questioned both the statistical significance and accuracy of the results,” she said.

“A couple of friends and I decided to encourage as many people as possible in Bowman to complete Andrew’s survey and return it. We started a Facebook page.  We contacted Andrew and continued to speak with him during the lead up to the survey being released and throughout it being distributed and returned.

“We organised a rally which was well attended and had some fantastic speakers, including community members, clergy and politicians. Unfortunately, Andrew’s schedule changed and he was unable to attend, however, he did provide a statement that was read out on the day.

“The rally was fortunately held the morning after marriage equality was achieved in all 50 states of the USA, and with a quick media release that morning we had a number of media outlets contact us on the day,” she said.

“With the assistance of Australian Marriage Equality we were able to run a full-page advertisement in the local newspaper and received other excellent support from them. We attended markets and spoke with hundreds of people in the Bowman electorate.”

I felt the same wave of hope across the region. My husband filled out Laming’s survey and duly posted it off, which meant our household was only half represented, but after the leaks about Warren Entsch and Terri Butler’s cross-party marriage equality bill, there was a sense that moves were afoot to deliver marriage equality by the year’s end, so my omission didn’t seem to matter. 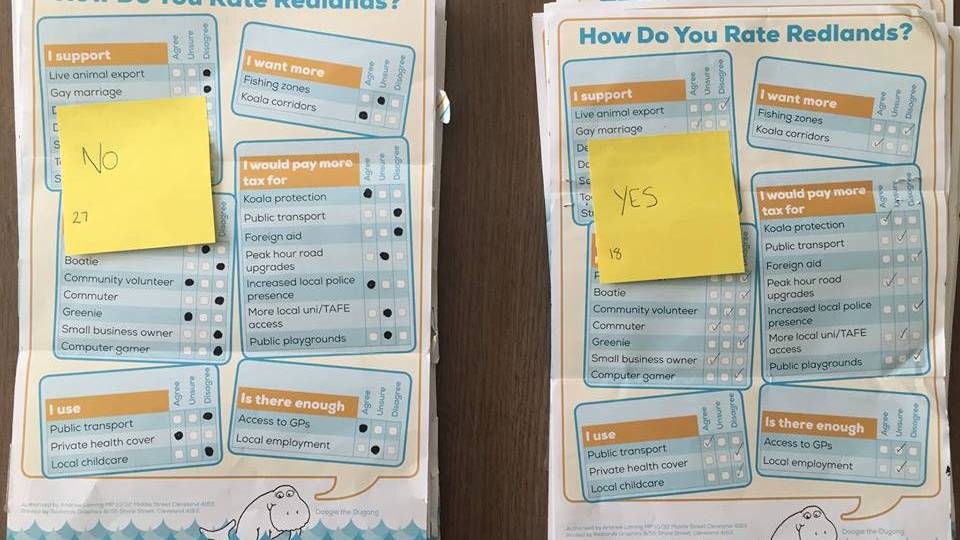 Laming fuelled the hope by predicting he could be given a conscience vote on the bill as soon as parliament returned, but he did not bend over backwards to get his constituents to vote in the survey he promised would decide his vote.

“Unlike his fellow MPs such as Natasha Griggs (Liberal MP for Solomon, Northern Territory) and Ann Sudmalis (Liberal MP for Gilmore, NSW), Andrew did not offer an online option, an email option, a phone option or even a photocopy of the form for people to express their individual views,” Adele said.

“Questions have been raised regarding the validity of the survey process used. There are a large number of the electorate who are reporting that they did not receive the survey in the mail.”

According to Adele, Laming announced that people who had not received a survey could attend his office on one business day – August 6 – show their identification, and cast a vote.

Crunch time came so swiftly by August 11 that even the social media had trouble keeping up with events.

Not accustomed to being consulted on anything, even issues important to their rural electorates, like CSG, mining and native vegetation laws, National Party MPs may well have been stunned at being asked to have a say on marriage equality at a six-hour special Coalition meeting.

Late in the evening, when Tony Abbott made his captain’s call that there would be no free vote for Coalition MPs on marriage equality, Laming’s survey – and his support for a free vote – were rendered instantly redundant.

When he announced the results on August 12, they barely registered.

According to Laming, 58 per cent of respondents disagreed with gay marriage. To put that result in context, only 23pc of individuals in Bowman households responded.

“I have followed Andrew’s statements on marriage equality for in excess of five years,” Adele said, “since first attending a forum he held in Bowman, and have attempted to engage with him many times on the topic of marriage equality, in person, online and via email. Unfortunately, I cannot say that these have been productive.”

Adele and I have similar hopes on the future of marriage equality campaign.

“I think the events of this week were anticipated in part by many involved in the marriage equality campaign,” she said.

“Further plans and contingencies are in place for all of us who are campaigning for marriage equality. It has been a long journey so far and it doesn’t stop here. The campaign will continue and I’m confident will go from strength to strength.

“People are hurting though, and I have seen an outpouring of support for those people impacted by the decisions this week. Let’s never forget at the heart of the matter are real people, children, youth, adults and elderly.

“I think it is extremely important no-one loses sight of this.”

Even though the likes of Abbott and Laming say they understand there are strong feelings in the community on both sides, marriage equality supporters are too easily written off as attention seekers and bleeding hearts. This is the first week in years I have been labelled a deviant.

Some say the increase in vitriol means change is imminent, but I completely disagree. Without someone in the Liberal Party rolling Abbott, or the electorate caring enough about the issue to vote him out, marriage equality is now years away.

And Laming’s survey managed to get him squarely back in his leader’s good books after February’s backbench revolt. Conservatives tend to do that sort of things while progressives hope.

Michael Burge’s memoir Questionable Deeds: Making a stand for equal love will be launched in conversation with Margo Kingston at Avid Reader, Brisbane, on September 25.