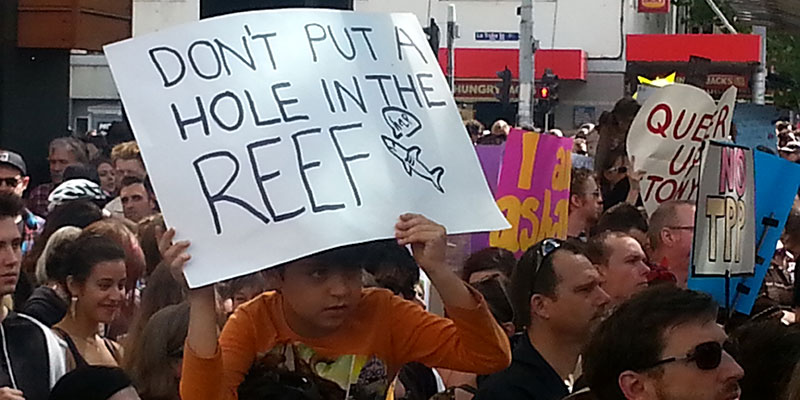 You took three calls this morning regarding MarchinMarch, two of which concentrated on the ratbag fringe and distasteful signs. I get the feeling neither of these callers actually went to the March, if they had they would have seen that the signs were overwhelmingly constructive not abusive, and about all the many things Australians should be concerned about, but sadly these things are often not reported. Methinks all they saw is whatever was printed in the Murdoch press, as I don’t go there I am assuming this.

I went to the Melbourne march, it was family friendly, lots of good will, the organisers went out of their way to promote it as respectful and fun and good will abounded. I was surrounded by young people, families, prams, scooters, wheelchairs, baby boomers. To sum up the ‘tone’, a tall young man near me on the steps of the State Library turned around and shouted out: “I am so proud to be here today with all of you”, that said it all.

I was overwhelmed with the variety of people that came together in LEGITIMATE protest about climate change, education, border protection, free speech. All you had to do was spend a few of your valuable minutes on Twitter to see the signs. It is your job to be abreast of these things and I expected better. No the media cannot and should not dismiss those who came out in huge numbers across this land.

So many of us are appalled and disheartened that the ABC (especially News24) is now just another run-of-the-mill lite news organisation (except for emergencies) seemingly cowered by Abbott, your core audience now only has Twitter and Citizen Journalism to depend on. The ‘other’ audience will come nowhere near you, so really the ABC is shooting itself in the foot. Your Breakfast News is trying hard to somehow incorporate serious news into a ‘lighthearted’” format! It just does not work. It is banal and frivolous, and the Sunrise and Morning Show audiences aren’t ever going to switch to you.

I send this by ancient fax as this is not a ‘formal complaint’ which was the only email option I could find on the website.

Returning to March in March, it was a significant protest against the policies of the Abbott Government, and if the press had covered it as it deserved to be covered we might just find our way forward to a fairer cleaner greener humanitarian Australia.