MIA Labor candidate Luke Willis finally speaks up, but no funds and no chance in Tangney 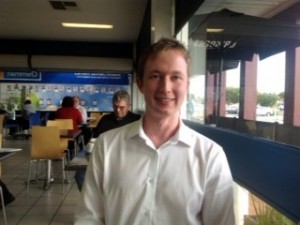 I was ready to write my missing-in-action piece when the elusive Labor candidate for Tangney in Western Australia Luke Willis finally made contact.

There had been numerous emails and weeks of silence but then he agreed to meet for an interview.

We met at a local café in Riverton and he had an explanation. The young Labor candidate had been busy with his medical studies – he is in his third year and has recently being doing his GP placement.

Mr Willis, 20, was nervous at first and did admit to little apprehension about the interview, but he soon warmed up.

Luke Willis says he has always been interested in politics.

It is where “you can help everyone in Australia. I like improving lives on a large scale, I like achieving something morally good. I am the vice president of the local branch and have been for the past year.”

He says he has seen the evidence first hand of how politics can help a person, such as his single mum.

“My mum came to WA alone when she was 16, thanks to (former Labor prime minister) Gough Whitlam allowing free (tertiary) education, we have basically got the life we have today. At 28 with no qualifications she went to University and that shot her off into a great career.

“I would have had no chance living in this area and doing those things if my mum had not had that chance.

Mr Willis says his mum is proud of his medical degree but believes she is more so about his move into politics.

He says his mother wasn’t a member of a political party but she was major activist and helped lead the anti-Apartheid movement in WA.

When asked what he had to offer young disaffected voters in Tangney, given his own youth, Mr Willis said he had set up a website and may set up a Facebook page.

He said he was trying to make contact through social media as he did not have the funding other candidates had access to.

When told there were ways to make contact without spending money such finding out where 18-to-25-year olds hung out in Tangney, Mr Willis said “we are mainly focusing on the social media, which is one place they all hang out.”

“I am prioritising my time. In going to a shopping centre, I might convince one or two people to vote for me. I am mainly using my time talking to the  people who are already Labor in the area so on election day we have a presence at hopefully every booth.”

But on election issues, Mr Willis has his answers. Here are some excerpts from our conversation.

Hall: Climate Change? A big one for Tangney given we have a climate sceptic for our local MP (Dennis Jensen).

Willis: Probably not, we don’t have the funding. We are going to stay fairly positive in our message. We are not going to attack him, but rather point out how our views differ.

Hall: NBN, is it an election issue for young people?

Willis: They think it is a very good thing. It has a major impact on education, listening to lectures, doing research, contacting other people for joint research, all of this requires internet. It allows people to work from home, which ultimately takes traffic off the road. For example, I have a friend who has a game production business, he works with people all over the country, they have to upload their files onto something like Drop Box so they can all access it, and currently on this system this can mean two days when they can do no work while they are waiting for the file to upload.

Hall: What do you think of the Labor Party’s PNG solution?

Willis: Overall it is making the best of a bad situation. There were so many tragedies occurring, something had to be done, and the public was calling for something to be done, so I believe a tough decision was made. Already it has made a lot of process, less boats are coming across, and people aren’t as likely to sign up to the smuggler’s deals. There will be fewer deaths.

Mr Willis said he knew people asked if there was any point standing in a safe Liberal seat.

“It is to give people that option to vote against Dennis Jensen,” he said.

“He has his views on climate change and the apology to the Aboriginal people that he stood out on, which I can’t believe. Also his views on uranium mining, so it gives people an alternative on all that. I know my chances are not the greatest, but it is giving people a choice, it is a democracy.”

Mr Willis said he would definitely be around for the next election.