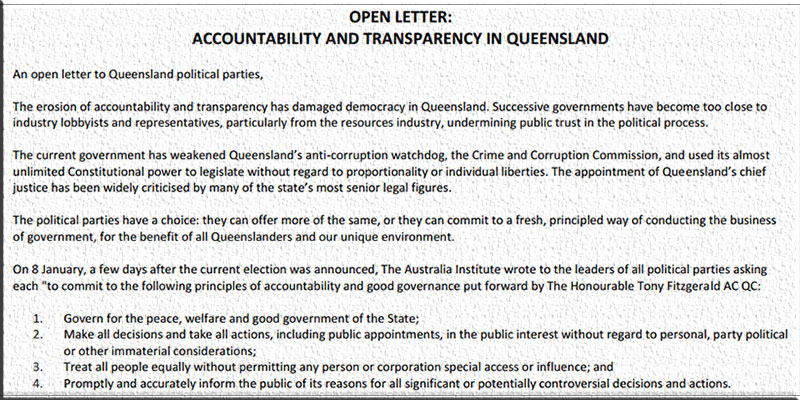 Graeme Orr is a Professor at the University of Queensland, Brisbane, focused on the regulation of democracy. His books include The Law of Politics (2010).

Nothing less than the fate of electoral democracy is at stake if we let money swamp politics.   Swamps have formed again in Qld and NSW, as they do periodically elsewhere.

Last week ‘50 prominent Australians’ published an open letter beseeching Queensland’s parties to agree to 4 governance and accountability principles.  It was motivated by concerns that Queensland’s Crime and Misconduct Commission, judicial independence and political finance laws have been weakened recently.

All political parties responded favourably.  Except the LNP.

I signed, not because I’m ‘prominent’.   I’m just one citizen worried that Queensland has gone backwards on political finance and donation disclosure.  (Albeit a citizen who has spent 15 years studying this).  In one term, we have gone from a lax system, to a regulated one, to a lax one again.

Soul Pattinson, a coal and pharmaceutical conglomerate, has $700 000 reasons to seek to influence politics.  That’s what it has gifted the Liberal Party, in government at state and national level, in the past 3 years.   A few big unions, too, dominate Labor’s finances in opposition.

Everyday citizens blanche at such contributions.  The perception of corruption, of money buying access and influence, if not quid pro quo favours, is inevitable.  It’s even unfair on other businesses and groups. They have to share the flak their industry attracts, and join the donation delivery cart or feel left out of the lobbying game.

South Australia and NSW are implementing real time disclosure of all four figure donations.  New York pioneered this decades ago.  In an internet age, every system should.  Without it, we can’t begin to judge the veracity of claims and counter-claims about tainted donations.

Yet in Queensland – as at national level – we won’t know who donated what to which parties until February next year.   Donations under about $12 500 won’t be revealed.  A business owner can anonymously donate that amount four times annually:  to local and national party branch, and via her private and company account).

There’s other ruses.  The LNP argues its sale of tables, at events to speak to and hear from Ministers, is a commercial transaction, not money ‘donated’ to it.  If that legal double-speak were true, then the parties are admitting to trading in a public benefit (ministers’ time and governmental information), and not merely ‘prostituting’ themselves.   To rub salt, taxpayers would also be subsidising it as a business expense!

Reintroducing expenditure limits is a must.  Only they can dampen the parties’ hunger for big donations and create fairer electoral campaigns.  The LNP was afraid the Palmer Party, not Labor, might match its war-chest.  Its snap election caught the newer parties on the hop. It needn’t have worried. The LNP will rake in an unprecedented amount – well over $40m – in this term of government.

Power tends to corrupt.  Or rather, the powerful want to perpetuate that power.  In politics, nepotism, massaging the flow of information, and milking incumbency are the tools of that trade.   Playing games with political finance is a key incumbency benefit.   Government advertising, soft-soaping the electorate before the campaign starts, is another.  The problems need to be tackled holistically.

No party has a monopoly on abusing public trust or milking political money.  In NSW, Labor reined for 16 years.  The Liberal-Nationals were starved of donations. (That money follows power is the surest sign of what the monied want).  And Labor was corrupted badly.

Sometimes the major parties form a cartel.  In Queensland last year they legislated themselves 2 lines of public funding, post-election and annual.  Beyond greedy, they structured public funding making it harder or even impossible for minor parties and independents to access.

The media needs to avoid false moral equivalence, however.   Sometimes one party, especially one facing defeat or in opposition, does act in a more principled way. Labor, under Bligh, foreswore selling access to frontbenchers.   Labor, The Greens and others in Queensland still voluntarily disclose $1000 donations, biannualy.   But now Labor has backslid on selling access.

As in cricket, one side can’t vow not to bowl dangerous bouncers whilst the other side continues too for long.  It’s neither stable nor fair.  Regulation is needed, not moral posturing.

Occasionally, the parties come together to design a better system.  Labor, Liberal and Greens recently innovated in South Australia.  In NSW, under the blowtorch of ICAC, two former Liberal and Labor ministers, together with cleanskin former Sydney Water boss Kerry Schott, just released a blueprint for timely disclosure and ethical reforms.

The swamp of money in politics can’t be wished away.   But tainted as it is, NSW is slowly working itself cleaner.   Queensland must do likewise.

Graeme Orr is Professor of Law at the University of Queensland and author of The Law of Politics and Ritual and Rhythm in Electoral Systems.