The mood of Indi’s grassroots politics might reflect a nation, documentary makers say 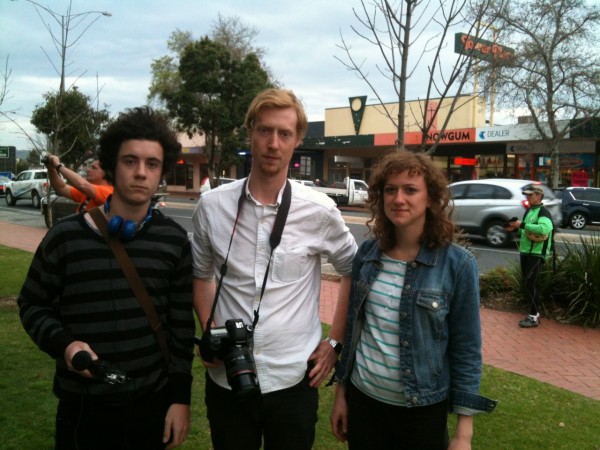 I became aware of a film crew in Indi earlier this week when they visited the pre-polling booth in Wodonga to interview and film the loyal band of volunteers (including myself) manning the booth and handing out How to Vote cards on behalf of candidates.

Members of the independent John Street Production company, director David Estcourt and sound technician Jamie Carolan, both from Melbourne, accompanied by producer Rebecca Hanssens-Reed from Philadelphia, USA, are making a documentary on the grassroots election campaign.

A contact in the Cathy McGowan campaign was the original point of access that has led these three young filmmakers to spending a week traversing the length and breadth of the 22,000 sq km of northeast Victoria that make up the electorate.

I caught up with them in Beechworth just after they had completed a 12-hour day talking to candidates, volunteers and voters and capturing the mood of voters of Indi.

The trio had been out to Mitta Mitta, a small town in the Mitta Mitta Valley. It stands on the Omeo Highway, 78km east of Wodonga and 360km northeast of Kinglake, the southernmost area of the electorate. At the 2011 census, Mitta Mitta and the surrounding area had a population of 217. The permanent town population is approximately 50.

They had been filming and talking to locals at a campaign event for independent candidate Cathy McGowan at the Mitta Mitta Hotel. Locals had told them it was a big day, the first time they could recall any candidate for Indi actively campaigning in their township.

“We are really interested in exploring what happened to make Indi the way that it is this election,” David Estcourt said.

“There are so many candidates, and as far as we can see and based on the people that we talk to, a lot of the issues that people have with the candidates tend to be values, personality and character issues. “

Estcourt says that seems to show people are extremely dissatisfied with entrenched establishment politics and hesitant to back mainstream political candidates because of a lack of trust and a conviction that mainstream politics is not interested in Indi.

“There seems to be a transition occurring in Australian politics at the moment. People say there are transitions happening all the time, but as far as we can see there is a transition going on in Indi and we are using this as a microcosm for the rest of the country.”

The filmmakers say they have an open mind and no particular angle but will pursue the story through their interviews and filming and finish the documentary themselves – as opposed to handing the work over to a production company or network – to keep their independence and control of the project.

The Mitta Mitta visit was an eye-opener for them. Mobile phone coverage, internet access and even basic television reception were hot topics in an area where residents receive a mishmash of TV from Queensland and New South Wales via satellite, but can’t get local stations or local news programs.

The locals were asking Cathy McGowan about pretty basic things in the context of trying to decide whom they should vote for at this election. Unless candidates go to the valley, there is no way for the residents to reach them or have their voice heard.

Most of the volunteers they meet say this is their first experience of being actively involved in a political campaign, especially those on Cathy McGowan’s team.

The documentary makers’ numerous requests for an interview with sitting Liberal member Sophie Mirabella have been respectfully declined, on the grounds that she is too busy in the last week of the campaign. To be honest, they say, they thought the request was a bit presumptuous at this late stage and an approach a few weeks ago may have been met more favourably.

They see comparisons between this campaign and the first modern grassroots campaign, the Obama campaign of 2008 – particularly the heavy investment in social media and boots-on-the-ground doorknocking.

They express surprise at the strong social media presence in the campaign in Indi.  With news organisations making social media engagement a priority, having a presence on social media means you are more likely to engage and attract their attention. As a result, you can grow your brand, which leads to more donations. Social media can legitimise a movement.

They also think the Border Mail is having a big influence on the campaign. They observe that more people in the regional seat still rely on the local paper as the first source of local news than would be the case in a city location.

From their talks with voters and candidates, the film crew say they detect an almost unified attitude against the sitting member, which they perceive is about her character and values.

Driving around the electorate so much, the visitors have also noticed a change in the signage on display.  Signs bearing images of Sophie Mirabella have been replaced with new ones that don’t mention her at all. They get the impression that Mirabella’s brand is diminished; her new signs focus instead on attacking the concept of independents.  Similarly, radio and print advertising is also pushing the notion that electing independents leads to instability in parliament.

The filmmakers say they will stay in Indi until the votes have been counted and the result is known.  They plan firstly to release the finished documentary online for free, with an option for viewers to make a voluntary donation possibly on the Vimeo platform.