Mr Abbott, where the bloody hell are you? 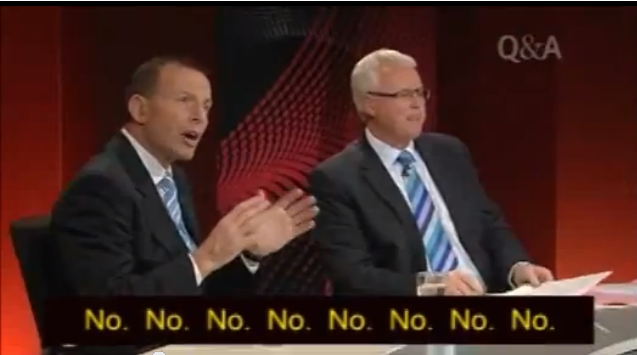 Tony Abbott on the run from media, scrutiny and accountability.

I have decided to submit a video question to Q&A. It’s quite rare for me to take such drastic steps such as engaging with actual pollies but this is something I felt I needed to get to the bottom of.

Today, 23 March 2013, marks 950 days since Tony Abbott was on Q&A. the country’s favourite TV show for raking pollies over the hot coals. In no other setting can the public sit a MP down and apply rigorous questioning for an hour. The man is in prime position to be our next Prime Minister in six months time and his plans are a bit thin on the ground, so it is entirely appropriate that we ask him some questions.

I love Q&A – in no other place can people produce evidence for someone to confront and address. Q&A is the people’s way of holding those who claim to represent them to account between those infrequent events called elections. It allows us to probe and assess our leaders. Tony has not made an appearance since the 16th August 2010, a week after Julia Gillard did and a week before the election on 21 August 2010.

Si it is a fair question to ask: Where’s Tony? And, why isn’t he turning up? What reasoning does he have for not turning up? What is more important than answering the questions we, the people, want answered?

This why I decided to submit a Freedom of Information request to the ABC in February. The request was denied, however it did produce some juicy evidence. The ABC has 26 documents between Abbott’s Office and the ABC regarding his attendance on Q&A. At a rate of one every ten weeks, it is unfair to make the claim the ABC has been badgering Abbott with requests. Rather, it  is making an infrequent, “Hi would you mind dropping in for a chat?” to a flat decline.

It has been a further 290 days since Barnaby ‘took it up’ with Tony.  There’s a certain irony that Barnaby put his foot in it – you’ll get Tony on Tony when there’s Tony on Julia – because the Prime Minister was scheduled to attend the next week.

Why has Abbott ignored us?

Liberal MP Kelly O’Dwyer is on next week, and it would be interesting to see what her response is to this:

Let’s not forget Tony Abbott ignoring, walking or hiding away from questions