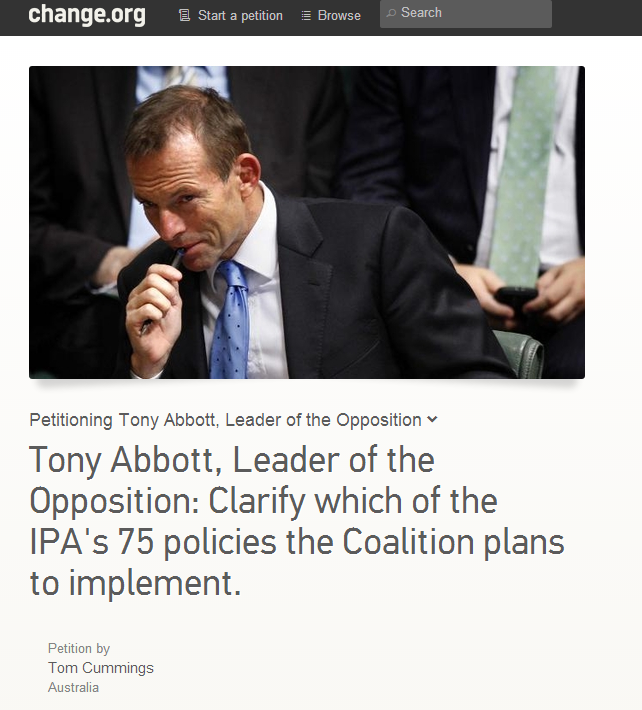 The Australian Labor Party is often accused of being at the beck and call of the unions. Of course there is a decent element of truth in this, in so far as they both tend to focus on workers rather than corporations, and the historical links between Australia’s unions and the ALP are many. However, in recent years those links have weakened (although never broken) and the dynamic of today is different than it was 20 or 30 years ago.

But what about the Liberal Party? What of their affiliations, their preferences? They have always come across as friends of industry and big business rather than the workers; their focus on ‘getting what you pay for’ is well in keeping with their conservative ideology and reputation.

The difference between the ALP and the Liberal Party in this respect is that, while the former is vilified for their union associations, the latter is largely forgiven for their industry bias. This may well be because the corporations they support are largely responsible for helping to shape and drive the public perception of such things, although that is a situation that is rapidly changing as non-traditional news outlets gain popularity and credibility.

But the Liberal Party of today has stronger, more visible links to the conservative side of town through its leader. Tony Abbott makes no secret of his relationships and associations with certain individuals within the Catholic church, the media and big business; and his fondness for sound-bites ahead of policy has left a vacuum that his friends seem only too happy to fill.

Nowhere was this more obvious than at the recent 70th anniversary dinner of the Institute of Public Affairs. The IPA is not well known to the majority of the public, yet this ‘independent libertarian think tank’ had News Ltd boss and IPA member Rupert Murdoch as their guest of honour. Right-wing commentator Andrew Bolt was the MC. Cardinal George Pell and mining magnate Gina Rinehart were in attendance. And Tony Abbott himself gave the speech welcoming Murdoch to the occasion (Murdoch’s ‘class war’ speech is published here).

One of the most frightening things about that night is that Abbott joked about a list of 75 policies that the IPA had published and encouraged him and his party to adopt. He listed which policies his Coalition had already taken on board: abolishing the carbon tax and the mining tax, privatising Medibank and slashing the public service were just a few.

“So, ladies and gentlemen, that is a big ‘yes’ to many of the 75 specific policies you urged upon me in that particular issue of the magazine….but Gough Whitlam I will never be!”

The question here is this: where will Tony Abbott stop? How many more of the IPA’s radical policy suggestions entitled ‘Be like Gough’ will he adopt as party policy, before or after the election? We all saw last week what happens when Abbott tries to be creative with policy; the alternative NBN announcement with Malcolm Turnbull was an unmitigated disaster. How likely then that he will resist any further policy announcements for as long as possible, only to cherry-pick from the list the IPA has so kindly put together for him?

Because that list, and the 25 additional policies that the IPA subsequently released to make it an even 100, make for truly terrifying reading. It is a libertarian vision for the future, one without safety nets, one without protections, and one without regard for the individual.

That’s why I started a petition, calling on Tony Abbott to clarify which of the IPA’s 75 policies the Coalition plans to implement. Of course I have no illusions that this petition will ever reach Abbott, or that even if it did, that it would make an iota of difference to his actions. A friend of mine called it their “favourite useless waste of time” petition, and I can honestly see why!

Because the common wisdom is that Tony Abbott will be prime minister before the end of the year. We need to think about that, and scrutinise what it will mean. It’s not good enough for him to hold all his cards close to his chest and promise that life will be better under his government. We deserve better than that; we deserve to be told.

Petitioning Tony Abbott, Leader of the Opposition: Clarify which of the IPA’s 75 policies the Coalition plans to implement.