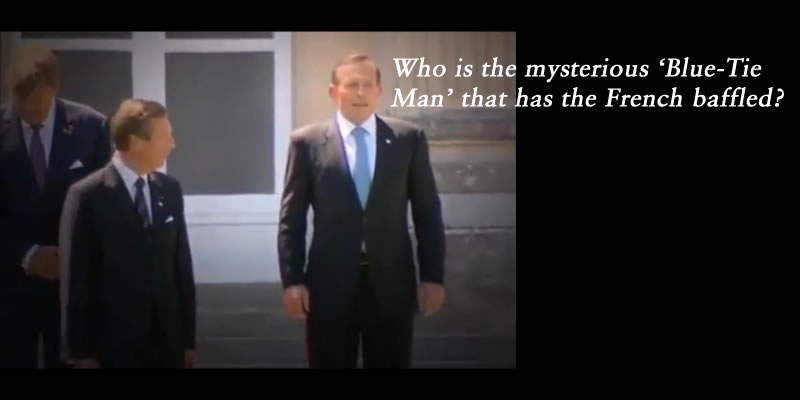 French authorities have detained a man found speaking gibberish to school children and are anxious to return him to his country of origin.

Wearing a neat suit with a pale blue tie, the man appeared at a school fete and began speaking in broken French to children, teachers and parents.

Officials also believe the man was involved in a series of ‘photo bombs’ over recent days.

German Chancellor Angela Merkel was the first to notice the so called ‘Blue-tie Man’ next to her during a world leaders photo shoot at Chateau de Benouville in Benouville, France. As the photo was taken, she is captured turning to her right and was heard to shout, “Foto Bombe!”

The Queen was reportedly not amused by the stunt.

World leaders at at Chateau de Benouville in Benouville, France.

“After he appeared on national television speaking broken French with school children, no country seems to want to claim him.”

President Hollande believed the man was mostly harmless and launched a worldwide appeal for anyone with information on his identity to contact their local authorities.

However, Russian President Vladimir Putin was not so forgiving over the lapse.

“Security is an absolute disgrace!” he said.

He also recalled ‘Blue-tie Man’ photo bombing him at last year’s APEC summit in Indonesia. At the time, President Putin slammed the act of ‘photo bombing’ as a vile form Western propaganda.

Indonesian President Susilo Bambang Yudhoyono apologised to President Putin at the time and indicated that ‘Blue-tie Man’ may have arrived in his country aboard one of the many orange asylum seeker boats fleeing Australia.

US President Barack Obama encouraged nations to work together to return the man home. He also remembered ‘Blue-tie Man’ from a photo bombing incident on a recent meeting with Austrian Prime Minister, Julia Bishop.

“This man obviously has some problems. We need to do everything possible to help here,” he said.

To rapturous applause from the gathered crowd he decreed, “Can we work together to get this man home!? Yes, we can!”

In broken French, ‘Blue-tie Man’ has now told officials he wanted to go to ‘#Canadia‘ and has subsequently left France.

This is a complete work of fiction and not intended to damage the reputations of anyone in any way.

‘Blue-tie Man’ has arrived home to his native country of Canadia.

‘Blue-tie Man’ man has arrived home to his native country of ‘#Canadia‘ where he has held a press conference and revealed himself to be the Prime Minister of Canadia, Tony Abbott.

Little is known about this tiny, island country, wedged in between Alaska and Russia in the Bering Strait.