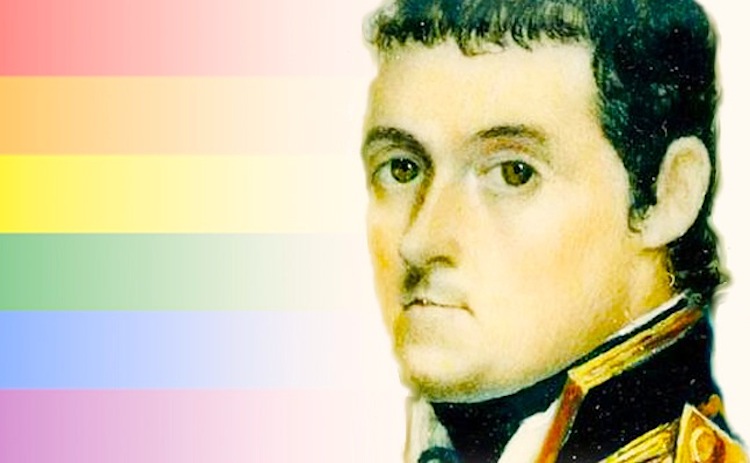 SPECULATION about the sexual orientation of iconic English seaman Matthew Flinders rose like a colourful maritime flag over a decade ago when previously unknown letters surfaced, including emotionally charged passages written by Flinders to fellow explorer George Bass.

In his 2007 Meanjin article “Exploring love: did they or didn’t they?” historian Garry Wotherspoon asserted: “If the excerpts from Flinders’ letter to Bass had been written to a person of the opposite sex, we would be in little doubt as to what sort of relationship it was or what kinds of hope and expectation it had once contained”.

“We would probably even confidently presume a sexual component in it, a basis in physical feelings if not actions. The possibility of a physical side to or a sexual element in Bass and Flinders’ relationship should therefore be acknowledged and considered.”

In the years since, little acknowledgement or consideration has been given to the sexuality of either man. 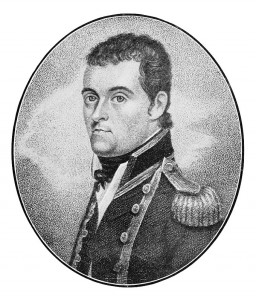 Historians are invariably baffled by Flinders in particular. Many of his extraordinary reactions lead them to describe such moments as out-of-character; but for anyone genuinely wanting to understand him, it’s time to shift perspective and explore the homophobia Matthew Flinders encountered.

Both Lincolnshire-born, Bass and Flinders met on a voyage to Australia in 1795 onboard the HMS Reliance. Once in the new colony, the two made a series of expeditions together. First it was short trips along waterways close to Port Jackson. Eventually, onboard the Norfolk, they circumnavigated Tasmania.

It’s tempting to paint all kinds of Brokeback Mountain-style possibilities for two unmarried men isolated on vessels in far-flung locations.

“There was a time, when I was so completely wrapped up in you, that no conversation but yours could give me any degree of pleasure …” Flinders wrote to Bass towards the end of this period, “And yet it is not clear to me that I love you entirely …”

Both men returned to England on separate ships in 1800 – the year of Flinders’ ‘love’ letter – and were married within six months of one another.

Bass soon left on a trading mission to the southern hemisphere in January 1801, leaving Flinders’ letter at home, where Mrs Bass – Elizabeth – had plenty of time to consider its contents and form the response she penned onto the letter itself.

“This, George, is written by a man who bears a bad character … no one has seen this letter but I could tell you many things that makes me dislike him,” she wrote.

Her warning was given during a major turning point in Flinders’ life.

He shocked his friends and family by responding to a suggestion of marriage from a friend, Ann Chapelle, who he’d discouraged in previous letters. 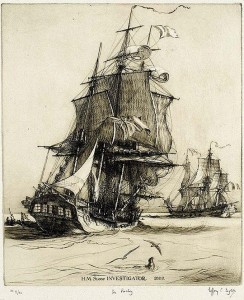 Then he went so far as to invite her to return to Australia with him, keeping the reality of the Admiralty’s strict rules on wives from her until she was forced to get her things off the HMS Investigator and let him embark.

What the speed and the controversy of the marriage achieved was widespread gossip within the Admiralty and his circle that painted Flinders as a fervently married man.

Any Brokeback-style expeditions were off the cards in the following years for Bass and Flinders, whose paths did not cross again. Bass captained the Venus on trading jobs to New Zealand and Tahiti, while Flinders completed the first circumnavigation of Australia.

By the time the Investigator docked in Sydney in 1803, Bass had departed on the Venus bound for Tahiti and South America on a voyage for which there remains no known end – the ship and her crew all disappeared completely.

Flinders also had problems returning to his wife, when, in December 1803, he was arrested on the island of Mauritius, a French-held colony.

Much has been made of Flinders’ seven-year imprisonment at the order of Mauritian Governor Charles Decaen. The records revolve around spying accusations against Flinders and his incorrect passport, understandable concerns considering the English and the French were at war.

But what if homophobic whispers had pursued Flinders to the southern hemisphere?

By the time Flinders limped into Mauritius in his damaged schooner the Cumberland, Decaen had heard of Monsieur “Flandaire”, probably from French captain Nicolas Baudin. 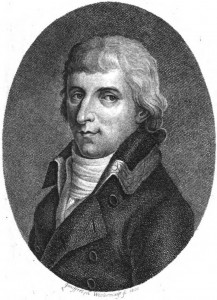 Baudin and Flinders had two previous encounters onboard Baudin’s ship, the Géographe, off the coast of southern Australia in early 1802.

After much flag-raising and shouting, when Flinders pulled the Investigator next to Baudin’s vessel and boarded, the men had the stilted, competitive discussion about charts and landmarks that has become folklore in the maritime history of both nations.

Researchers Jean Fornasiero and John West-Sooby had another look at the accounts of the Flinders-Baudin meetings in their 2005 essay A Cordial Encounter?

“Certain discrepancies between the accounts of the two captains are difficult to explain,” they wrote. “These have generally been attributed to communication difficulties between the French navigator and his English-speaking counterpart”.

“This assumption, however, is far from self-evident. We have thus chosen to canvass the full range of possible explanations for the conflicting accounts of that meeting, including the hypothesis that Flinders, who is generally considered a reliable witness, may indeed have misrepresented his encounter with Baudin.”

But the one possibility they neglected was that Nicolas Baudin knew a homosexual when he saw one.

We do know Flinders ‘spat chips’ at Decaen for keeping him against his will.

Eleven years prior to this encounter, the French Revolution recognised the existence of homosexuality when it left consensual, private sexual relations between two men out of the French Penal Code of 1791 (and again in 1810).

Before this, gay men could be burned at the stake if caught in sexual acts. As a consequence of the change, they were generally free to be themselves in public.

Compare that with Flinders’ place of birth, where, at the time of his meeting with Baudin, Henry VIII’s Buggery Act of 1533 still listed sodomy as a hanging crime. Consequently, writing love letters would only have been for the extremely courageous.

Baudin arrived in Mauritius, and died there of tuberculosis, just months before Flinders’ incarceration. Its doesn’t require a great leap to imagine him describing Flinders to Decaen as “pédéraste pétulant” instead of “un navigateur qualifiés”.

We do know Flinders ‘spat chips’ at Decaen for keeping him against his will, from letters the French Governor received from the explorer.

Decaen requested Flinders dine with he and his wife on the second day of Flinder’s detention. Flinders, who’d refused to remove his hat when he met the Governor, declined the olive branch and kept to his prison room dusting-off more missives.

His responses were so stinging that the Governor never repeated his invitation and kept this bird in a cage for a further seven years.

The cage wasn’t entirely austere for Flinders – trips to the theatre and stays with local aristocrats, and parole for extended periods, took place in a civilised French colonial society which tolerated any gay rumours and allowed him to pass the time writing.

But Decaen maintained his personal control over Flinders’ detention, even contravening Napoleon’s 1806 directive to free the Englishman. The Governor’s excuse was the kind of blanket term used to beleaguer Oscar Wilde: Flinders was dangerous.

After his release and return to England in 1810, where he continued writing on his many groundbreaking explorations, Flinders’ ill health brought about his untimely death at the age of forty.

Yet his remarkable achievements resulted in inexplicable omission from the ranks of the Royal Society, the Admiralty’s old boys’ club that may, like Baudin, Decaen and Mrs Bass before them, have suspected the truth.