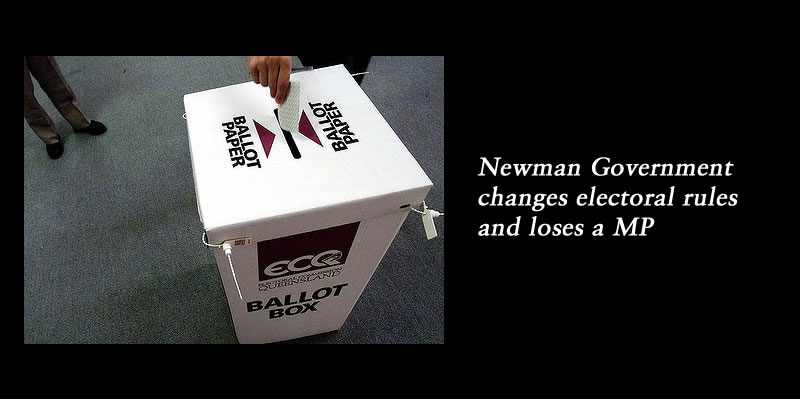 In a late Thursday night sitting, the Newman Government used its number to push through changes to the Queensland electoral act.

Among the changes, one most concerning to objectors is the scrapping of limits to political donations. Previously, caps were set at $5000 to political parties and $2000 for candidates per donor.

Matching the federal rule, any donations under $12,400 no longer have to be declared. Previously, the amount in Queensland was $1,000. Records on these donors will now only be released annually rather than biannually.

Premier Campbell Newman told the media that he was bringing Queensland into line with the federal government rules as he’d received advice from the crown solicitor that it was vulnerable to a high court challenge.

“Constitutionality, laws get struck down if a federal law overrides it,” he said.

Despite admitting that it wasn’t a good move to raise the threshold he declared that he would write to the federal government advising them to lower their threshold.

“I will write to them about this and make it very clear about the position of the Queensland government.”

Previously set at 4 per cent, political parties must now receive at least 6 per cent of the vote to qualify for taxpayer based electoral funding,

A new “policy development payment” will be made to parties from taxpayer funds. It will be denied to independents and small parties. The amount granted from the scheme will be $1.5 million in the first year and $3 million in the next financial year.

The ratio of how this fund is divided between the major parties is determined by the Queensland Attorney-General. There are no requirements or mechanisms to show how the money will be spent.

On election day, voters will need to provide proof of identity. If a person does not have an ID, a declaration vote is made to note that they presented at a polling booth. This could pose a problem for people without drivers licenses, in particular Aboriginal and Torres Strait Islanders where only 38 pc have one compared to the rest of the population at 90 pc.

Despite his department saying there was “no specific evidence”, Attorney-General Jarrod Bleijie argued that voter ID would prevent electoral fraud.

The Queensland electoral commission is soon to decide on where how-to-vote cards may be displayed around polling booths. If this material is considered misleading, the commission can ban them.

Having been sacked from his position of Assistant Health Minister last week, LNP MP for Stafford, Dr Chris Davis, spoke against the changes from the backbench. Most notably, he raised his opposition to the raising of the donation declaration threshold to $12,400.

When the vote was being taken, he was absent from the chamber, effectively voting no. The Newman Government had previously changed the rules with regard to members crossing the floor; if a government MP is in the chamber it is assumed their vote is for the government.

Dr Davis later admitted that he was abused by colleagues for his stance.

A Reachtel poll commissioned by Dr Davis, also reflected the displeasure of Stafford constituents to the changes. He felt his position as their MP was untenable.

At the end of the parliamentary session on Thursday night, Davis quietly handed the Speaker a hand-written letter resigning from parliament. The move now triggers a by-election for his seat of Stafford. With a general election ten months away, it would be unprecedented for the electorate to remain vacant for so long.

The Premier was surprised by the announcement and wished Dr Davis had contacted him before resigning. He said MPs should stay on until general election times unless a serious family problem prevented that.

It is unclear at this stage when the by-election for Stafford will be called. Newman stated that he would have to consult with the clerk of parliament. However, under the Queensland constitution, there are no specific rules on when by-elections should be called.

It seems the LNP will get to try out their electoral changes much sooner than expected.