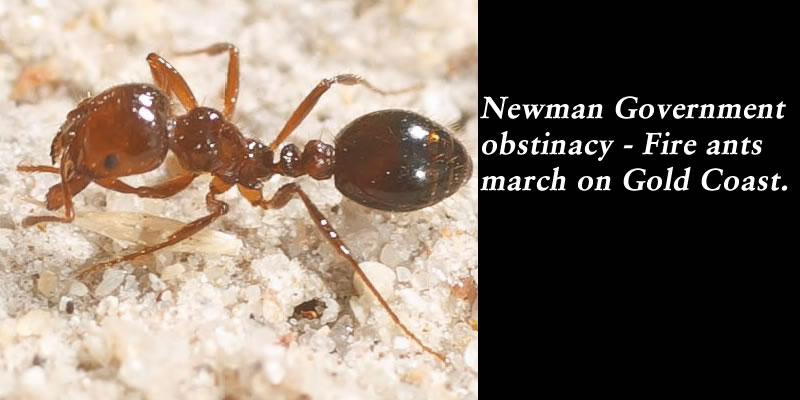 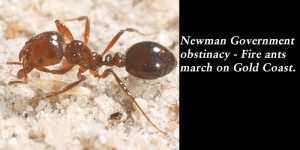 7 News Brisbane: More than a decade after the first fire ant was detected in Queensland it’s been confirmed the pest has spread south to the Gold Coast.

Fire ants. A tiny creature with a detrimental impact to Queensland’s South-East and potentially Northern New South Wales. Last week the Queensland Department of Agriculture, Fisheries and Forestry (DAFF) confirmed nests had been found on the Gold Coast near Yatala.

The ant is native to South America and first appeared in Queensland in the Brisbane suburb of Wacol in 2001. Infestation of land makes habitation impossible for livestock, pets and humans. Bites from thousands of tiny jaws develop into great welts and pain. Instances of young animals dying have been recorded.

In 2012, the Newman Government slashed in half funding for the fire ant program down to $1.1 million and terminated the employment of 45 staff. A 2013 right to information request by The Courier Mail showed that the government was warned by the former Managing Director of Biosecurity Queensland not to cut the budget or risk further infestation. However, Minister for Agriculture John McVeigh ignored the appeal, instead taking advice from his Director-General who he said were happy with the funding level.

“My senior technical staff and my Director-General confirm that they are very happy with the budget we have in place,” he said in a 2012 interview with @7NewsBrisbane.

Mayor for the agricultural rich Lockyer Valley, Steve Jones was reported as being furious at the funding decision in The Gatton Star.

“As mayor, I will do whatever it takes to fight for the reinstatement of funding to the program and I expect nothing less from local MP Ian Rickuss,” he said.

“Fire ants are a serious environmental and agricultural problem causing damage to seeds, seedlings and fruit and have been known to cause the deaths of newborn and young livestock and in some cases have rendered animals blind.” 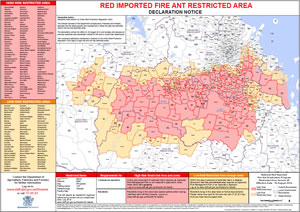 In 2012, the Newman Government pledged to eradicate the pest by 2015 and reiterated this goal in 2013. However, updated maps dated 30 August, 2014, at the department website show the spread across the state. With soil being the major medium by which the nests move, businesses such as landscapers need an Approved Risk Management Plan (ARMP) before transporting any landscaping products. Biosecurity Queensland inspectors also carry out site inspections but it would appear they are losing the battle.

The latest technology being deployed is by use of helicopter-mounted fire ant detection systems. However, there is some doubt as to how effective this is. A 2013 report in The Courier Mail showed only two nests being found in an area of 85,000ha. A whistleblower from the fire ant control program told the paper the technology didn’t work.

“There have been no nests found by the chopper using the infra-red camera after flying thousands of hours,” he said.

“All it picks up is horse or cow dung, rocks and other rubbish. One property had thousands of points of interest on it but the camera did not pick up the fire ant nests on this property.”

“This is only the second season we have used remote sensing,” he said. ”The technology is being refined and improved as we learn more.”

“The output from early versions of the detection program picked up images that were not fire ants which you would expect with any new program. These may have been other items, such as cow pats, that were identified as being similar to a fire ant mound. These are then ground (checked). The program continues to be refined and improved to reduce the number of images identified that are not fire ant mounds.”

Last week, Ipswich Councillor Paul Tully expressed concern at there being no stopping the pest.

“I think there’s only two chances of stopping the fire ant now, that’s Buckley’s and none,” he said.

“All of Ipswich is a declared zone but most of the public interest in the matter has gone off the boil, people don’t know what they’re looking for.”

The fire ant is on track to become the 21st century equivalent of the cane toad. With the program now set back years, the Newman Government’s 2015 goal of eradication is impossible.