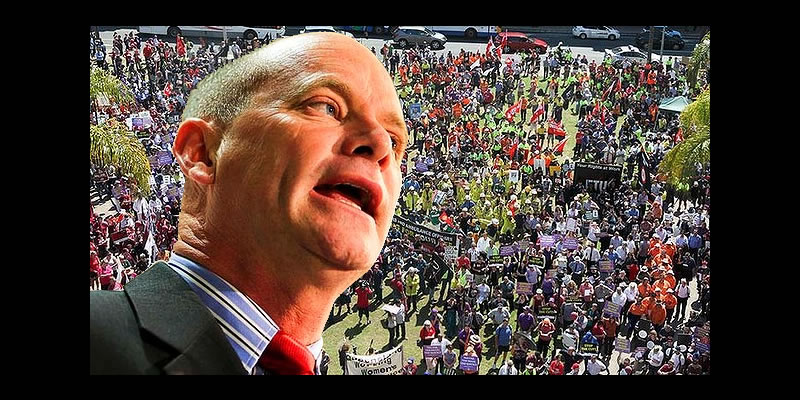 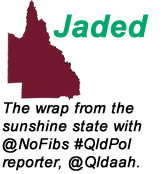 Campbell Newman’s Liberal National Party (LNP) has completed its second year in office. However, the March 26 anniversary was marred by more controversy.

Newman began the week by announcing a proposal for new alcohol related violence laws: Life for one-punch killers, user-pays drunk tanks among new booze plans for Queensland. This would see tougher penalties imposed on ‘coward punch’ killers. Police would also have special ‘chill-out’ areas around the clubs precinct where those overindulging could be escorted for recovery. They’d also be fined on first offence a penalty of $200 for their stay.

In the wake of the disastrous Redcliffe by-election which saw Labor take the seat from the LNP with a 17.2 per cent swing, Newman had declared his government would now be a “listening and consulting” one.

He offered public comment on his Safe Night Out Strategy. However, unlike the laws introduced into New South Wales by the O’Farrell Government, there would be no changes to pubs and clubs closing times. It was a sign that the government had all ready made up its mind not to penalise Queensland’s hotel industry. The “listening and consulting government” was starting to sound like another slogan. 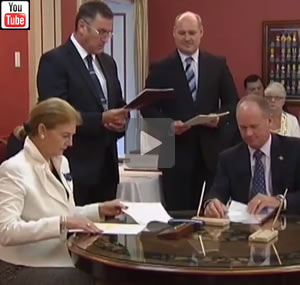 Campbell Newman is sworn in as Queensland Premier on March 26, 2012, by Governor of Queensland, Ms Penelope Wensley.

In contrast, Queensland’s Labor opposition supported the NSW plan and adopted it as a policy platform ahead of the coming election.

If Newman thought his Safe Night Out Strategy would distract the media from his unresolved disputes with Queensland’s public hospital doctors and the legal fraternity, he was wrong.

Mayhem spilled over from the previous week in which Queensland Attorney-General Jarrod Bleijie disclosed details of a conversation with Supreme Court of Appeal Justice Margaret McMurdo. During a speech on gender equality in Brisbane, McMurdo had suggested that the Newman Government had “an unconscious bias” against appointing women as judicial officers.

“The current Queensland Government, since coming to office about two years ago, has appointed 17 judicial officers. All but one are men.”

Bleijie had hit back the following day in The Courier Mail revealing it was McMurdo who recommended all the appointments during his tenure and accused her of an attempt to get her husband an appointment.

On the eve of Newman’s two-year anniversary, former Queensland Solicitor-General, Walter Sofronoff, took to Queensland radio and television to call for Bleijie to resign for breach of confidence and defamation of McMurdo.

Sofronoff himself had resigned the previous week in a one line letter to Bleijie. He would not disclose to the media his reasons stating it would be a “breach of confidence with his former client” (the Queensland Government). Opposition Leader Annastacia Palaszczuk had her request denied for the resignation letter to be tabled in parliament. Newman backed his A-G and refused to ask for his resignation.

As the week became shrouded in debate from the legal fraternity, it reached a crescendo on Friday drawing the ire of Tony Fitzgerald QC and recently retired Queensland Supreme Court judge, George Fryberg (1994 – 2013). 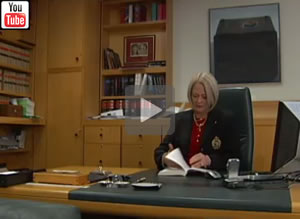 Fitzgerald wrote, “It is appalling that a junior solicitor appointed to a position which is unsurprisingly far beyond his competence and experience has betrayed her (McMurdo) Honour’s confidence and defamed her. His hubris is breathtaking.”

Fryberg agreed to be interviewed by 730 Queensland’s Matt Wordsworth. He described Bleijie’s attack as “personal” and  “deplorable”.

“I thought it was a serious mistake for him to disclose publicly what he’d been told confidentially.”

He explained that all lawyers make mistakes due to it being a “combative profession” but an apology was in order.

In February, an Auditor-General report had uncovered a handful of cases of private doctors falsely claiming payments for patients in the public system. In a typical Newman Government knee-jerk reaction, Springborg decided that all doctors operating in the public health system would now need to be placed on individual contracts, very similar to the work choices of Prime Minister John Howard era. Unanimously, the doctors voted to reject the individual contracts and threatened to resign en masse.

Tensions escalated when in parliament Newman accused doctor associations of “rabble rousing” and Springborg caused insult by stating, “you wouldn’t get the sort of  appalling conduct from the worst of wharfies”. The government declared if all doctors resigned they would employ new ones from interstate or overseas. 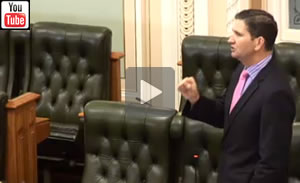 Springborg raised the insult level further this week when on Thursday he described doctors as “union thugs”. It was in response to a Courier Mail article which revealed a series of leaked emails between Dr Tony Sara, a NSW based president of the Australian Salaried Medical Officers Federation and Queensland doctors. Later, on 612 ABC Brisbane he repeatedly described doctors who refused to sign as “militant doctor unionists”.

As if it wasn’t enough to have the state’s lawyers and doctors offside, the announcement came through that Campbell Newman would receive a $70,000 pay rise.

In 2013, a delayed MP pay rise from the previous government resulted in a massive 42pc pay hike for all Queensland’s parliamentarians. The resulting community anger and protest from the public service who were struggling to be awarded a 2.5pc rise, prompted Newman to commission a tribunal of remuneration. It would review all MP salaries, if their position held a ministry or were members of parliamentary committee. With it’s decision final, all MPs eventually received a 9pc rise.

On Thursday this week, the tribunal returned a second increase, an average raise of $55,000 per MP. During the first round, the Premier’s salary had only risen by $12,000. In this second round, Newman gained a top up of $70,000. He was now Australia’s highest paid Premier at $380,000. He was only $20,000 short of the total remuneration he was scheduled to receive under the original 42pc deal.

It was the pay rise they had to have. The tribunal’s findings were so irreversibly final. Read more about #PayRort here. 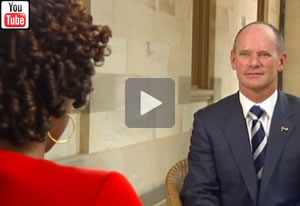 With Queensland still using flexible three year terms, a snap election is all ways a source of speculation. However, it’s more likely the Newman Government will want to go full term and have another budget under its arm before going to the polls in early 2015.

In an interview to ABC News Qld, Newman confirmed he would re-contest his seat of Ashgrove despite facing a possible defeat. A year from now, based on current polling, Queensland will have a new premier in current deputy, Jeff Seeney. Labor would need to pick up an additional thirty-seven seats to reach the magic forty-five needed to form government.

Yet, with a year to go, an LNP loss has gone from the ‘impossible’ to ‘improbable’. Based on current performance, if there is anyone that can assist in reversing a landslide victory for Labor, it’s Campbell Newman.