The resignation from state parliament of LNP MP Dr Chris Davis has triggered a shock byelection for the seat of Stafford. Davis disagreed with his own government on changes to electoral rules, chiefly the raising of the donation declaration limits to political parties from $1000 to $12,400.

Along with the implementation of public health doctors contracts and changes to the Crime and Misconduct Commission (CMC), it was the third clash he’d had over issues with Premier Campbell Newman. The previous week he’d been sacked as Assistant Health Minister.

Davis was the second MP to resign from Parliament and the fifth MP to leave the LNP under Newman’s leadership. 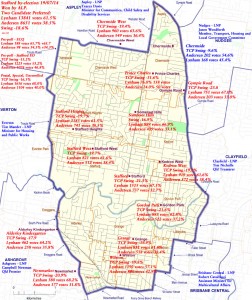 Forced to cover up their lies. Sight of the day. #staffordvotes #qldpol pic.twitter.com/WeshXnW5jn

Chatting to real firefighters on the #stafford booths about the need to #sendnewmanamessage #staffordvotes #qldpol pic.twitter.com/SJ7L1V4ZKM

Very proud of the efforts of the Young LNP today. Out in force supporting Bob Andersen in Stafford! #qldpol pic.twitter.com/2AMRsnRXOF

LNP ordered to cover up their lies. #qldpol #staffordvotes pic.twitter.com/rjmoVKVlZ0

Bob Andersen ‘s brother Voting in #staffordvotes where none of the candidates can vote. @abcnews #qldpol pic.twitter.com/bOMYwWFniq

Ladies of Wilston expressing themselves outside polling booth for Stafford by-election. #qldpol pic.twitter.com/BdjlQDam0o

At this stage @LNPQLD making no move to remove signs; lawyers called in to battle. #staffordvotes @abcnews #qldpol

Labor campaigning for #staffordvotes but LNP red wigs not far away pic.twitter.com/C5wUR8efea

7 News Brisbane: Candidates for the state seat of Stafford have faced off ahead of Saturday’s by-election.

Steve Austin is getting ready to broadcast from 08:30 at Stafford City this morning – come on down! #staffordvotes pic.twitter.com/2Hc7VKXAOb

“I am the guy who got us through the Brisbane floods, the Gap storms in 2008, made sure that the people of Bundaberg were looked after and, particularly, got those people off those roof tops.”

Responding to questions about arrogance, Newman declared he would not be changing his leadership style.

The comments sparked the creation of a new Twitter hashtag, #SuperNewman.

ABC News Qld: “I’m the guy who got us through the Brisbane floods, The Gap storms in 2008. Made sure that the people of Bundaberg were looked after and particularly got those people off rooftops.”

@RobCavMP I was driving through the southside earlier and saw @Lynham4Stafford waving his fist at kids on his lawn. #qldpol

Exit poll results are in @QuestNewspapers community forum #Staffordvotes and the people want Bob Andersen as their MP after spirited forum.

Anthony Lynham seems to be getting heckled quite a lot in this community forum. A very divided audience. #staffordvotes #qldpol

Bob Anderson explains why he is called “Bob” not his birth name “Jared”. It’s a nick name he got at uni. #Staffordvotes #qldpol

Former MP Chris Davis has submitted questions to the #staffordvotes forum. Wants to know what the candidates think of their leaders. #qldpol

Hecklers at the back told to let the candidates speak. #qldpol #staffordvotes

A community forum for candidates as #StaffordVotes in 2 weeks. Who’s got your vote? @7NewsBrisbane pic.twitter.com/49rGKMjmVl

The One Punch Can Kill campaigner is under pressure as it’s his 34th wedding anniversary. Dinner booking on Goldie tonight! #staffordvotes

SallyAnne Vincent is running for Family First – accountant with blended family – asks the forum to vote for her and not ALP. #staffordvotes

Signs on the footway are often used by candidates and political parties before polling day.

You do not need approval from Brisbane City Council to display a pre-polling day election street stall sign on the footway, as long as you comply with the following requirements.

A pre-polling day election street stall sign on the footway must not be closer than 100 metres to another such stall operated by the same political party or candidate on the same side of a road.

Not4Sale 4, LNP Bob 12! I bet I still get a call from council! Love the equality. #Staffordvotes pic.twitter.com/WWwcgPZeCj

4 more around the corner, & it’s the same bloke that was fined last week! #Staffordvotes @brisbanecityqld pic.twitter.com/8ojEjqTl6G

10 LNP signs Stafford Rd front of Maccas. No care that they are breaking the law #Staffordvotes @brisbanecityqld pic.twitter.com/OkC2hlfzxc

(July 4, 2014) The swing against the Newman Government

Be at Stafford State School at 2pm on July 5 for the Stafford by-election candidate forum. Follow http://t.co/ddRdZ7W10K #staffordvotes

@Qldaah For 30 years electoral law has permitted candidates to nominate using the name they are known as.

@Qldaah It is entirely common for incorporated professionals to use their known-name as their trading identity.

@Qldaah He is going into parliament using the name he says he is known as, as does every candidate.

The order of the candidates on the Stafford by-election ballot paper. #qldpol @couriermail pic.twitter.com/pKLUWv08UO

Great turnout at the Stafford Health Forum – but where is the LNP candidate Bob Andersen? #qldpol #oznurses pic.twitter.com/3fpuwqezCq

Protect our Reef. Wld you dump on rubbish on a iconic tourism site? https://t.co/YuNCahaYBb #StaffordVotes a Green in state parl would act

However, Premier Campbell Newman was commenting.

(June 26, 2014) Newman gets it wrong on air – Dr Anthony Lynham confirms he lives in Stafford

4BC Newstalk: After attacking Labor’s candidate Dr Anthony Lynham for not living in the electorate, Premier Campbell Newman is informed that he actually does. 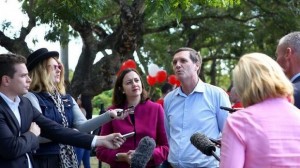 Opposition leader Annastacia Palaszczuk announces Qld Governor has issued a writ for the Stafford by-election to be held on the 19th of July.

@theqldpremier is wrong. I live in Stafford, well and truly in the electorate #qldpol 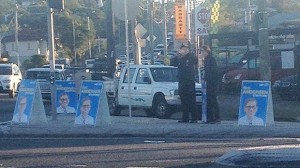 Not 4 Sale group claims Brisbane Council officers have spoken to their party members about campaign sign placement that breaches its election regulations, but the same has not been applied to LNP campaigners.

Opposition leader Annastacia Palaszczuk announces Qld Governor has issued a writ for the Stafford by-election to be held on the 19th of July.

Out with Dr Anthony @Lynham4Stafford talking with #stafford residents about the LNP’s health cuts. #qldpol pic.twitter.com/MrC6HxBe3x

Dr Lynham and Mrs Symons at Keith Payne Park Stafford all ready for a day of campaigning in Stafford, Brisbane!! http://t.co/KKaPW0f6iB

Young Labor are a no-show again in Stafford today. Perhaps they’re embarrassed their Candidate wants to raise the drinking age to 21 #qldpol

The LNP candidate has told broadcaster, Ben Davis, that he will continue to run in the by-election as Bob Andersen.

“[Jared] is the name my parents gave me, I went by it until I was 18, but at uni my mate’s nicknamed me Bob and it really stuck like glue.”

Davis put it to Andersen that the nickname may cause confusion in the electorate.

“When it came to run for parliament, I just didn’t see how it would be viable to run as anything other than Bob, that is what everyone knows me as.”

“Obviously when you do something like a licence or something formal like that, you need to do it with your real name, but when I did that with the board, I also sent them an email that I go by Bob as a preferred name, so that they would know the situation.”

Andersen also denies he is behind pro-LNP anonymous Twitter accounts.

Out and about in #Stafford meeting the locals with Bob Andersen #qldpol #StaffordVotes pic.twitter.com/NhiHMCooo2

Very happy to hear psychologist, #Stafford local & my good mate Bob Andersen has been preselected to run for the LNP. #qldpol #staffordvotes

However, Dr Chris Davis said, “Essentially (I) did not require three official offices and three car spaces. Most of my work as assistant minister was meetings that could be done more readily at Stafford or Parliament.”

ABC News Qld: Dr Paul Williams from Griffith University predict a Labor win and a swing of 10 per cent.