Obama’s Brisbane climate clarion call to Australia and the world 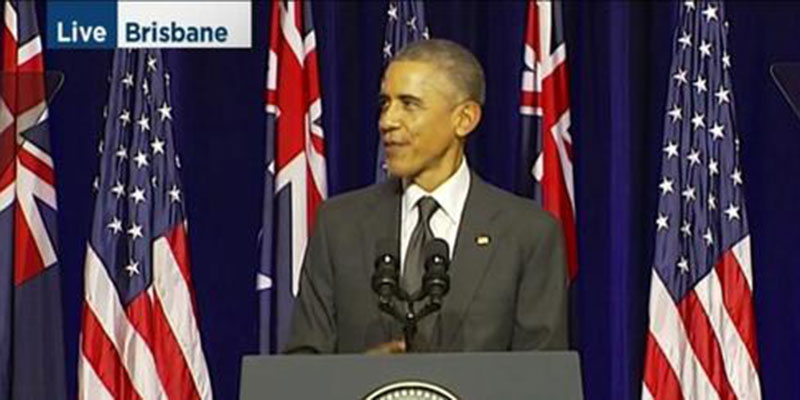 As we develop, as we focus on our econ, we cannot forget the need to lead on the global fight against climate change.  Now, I know that’s — (applause) — I know there’s been a healthy debate in this country about it.  (Laughter.)  Here in the Asia Pacific, nobody has more at stake when it comes to thinking about and then acting on climate change.

Here, a climate that increases in temperature will mean more extreme and frequent storms, more flooding, rising seas that submerge Pacific islands.  Here in Australia, it means longer droughts, more wildfires.  The incredible natural glory of the Great Barrier Reef is threated.  Worldwide, this past summer was the hottest on record.  No nation is immune, and every nation has a responsibility to do its part.

And you’ll recall at the beginning I said the United States and Australia has a lot in common.  Well, one of the things we have in common is we produce a lot of carbon.  Part of it’s this legacy of wide-open spaces and the frontier mentality, and this incredible abundance of resources.  And so, historically, we have not been the most energy-efficient of nations, which means we’ve got to step up.

In the United States, our carbon pollution is near its lowest levels in almost two decades — and I’m very proud of that.  Under my Climate Action Plan, we intend to do more.  In Beijing, I announced our ambitious new goal — reducing our net greenhouse gas emissions by 26 to 28 percent below 2005 levels by the year 2025, which will double the pace at which we’re reducing carbon pollution in the United States.  Now, in a historic step, China made its own commitment, for the first time, agreeing to slow, peak and then reverse the course of China’s carbon emissions.  And the reason that’s so important is because if China, as it develops, adapts the same per capita carbon emissions as advanced economies like the United States or Australia, this planet doesn’t stand a chance, because they’ve got a lot more people.

So them setting up a target sends a powerful message to the world that all countries — whether you are a developed country, a developing country, or somewhere in between — you’ve got to be able to overcome old divides, look squarely at the science, and reach a strong global climate agreement next year.  And if China and the United States can agree on this, then the world can agree on this.  We can get this done.  And it is necessary for us to get it done.  (Applause.)  Because I have not had to go to the Great Barrier Reef — (laughter) — and I want to come back, and I want my daughters to be able to come back, and I want them to be able to bring their daughters or sons to visit.  (Applause.)  And I want that there 50 years from now.

Now, today, I’m announcing that the United States will take another important step.  We are going to contribute $3 billion to the Green Climate Fund so we can help developing nations deal with climate change.  (Applause.)  So along with the other nations that have pledged support, this gives us the opportunity to help vulnerable communities with an early-warning system, with stronger defenses against storm surges, climate-resilient infrastructure.  It allows us to help farmers plant more durable crops.  And it allows us to help developing countries break out of this false choice between development and pollution; let them leap-frog some of the dirty industries that powered our development; go straight to a clean-energy economy that allows them to grow, create jobs, and at the same time reduce their carbon pollution.

So we’ve very proud of the work that we have already done.  We are mindful of the great work that still has to be done on this issue.  But let me say, particularly again to the young people here:  Combating climate change cannot be the work of governments alone.  Citizens, especially the next generation, you have to keep raising your voices, because you deserve to live your lives in a world that is cleaner and that is healthier and that is sustainable.  But that is not going to happen unless you are heard.

It is in the nature of things, it is in the nature of the world that those of us who start getting gray hair are a little set in our ways, that interests are entrenched — not because people are bad people, it’s just that’s how we’ve been doing things.  And we make investments, and companies start depending on certain energy sources, and change is uncomfortable and difficult.  And that’s why it’s so important for the next generation to be able to step and say, no, it doesn’t have to be this way.  You have the power to imagine a new future in a way that some of the older folks don’t always have.

Remarks by President Obama at the University of Queensland