I know from experience that sometimes when the death of something you believe in stares you in the face you lose your judgement. It seems that this happened to business journalist Paddy Manning  yesterday morning. By 6pm last night he’d been sacked. by editorial chief Garry Linnell.

Like many journos, I thought @gpaddymanning must have another job to go to when I saw his piece in Crikey. Apparently he hasn’t, and that hurts him and his wife and children.

Today, the consensus of a meeting of Fairfax business journos was that management’s decision was correct and that they could take no action to support their colleague. What Paddy did was to write a critical piece about his employer in a rival publication, and that’s a cardinal sin.

Apparently he thought he’d be reprimanded and sent to Siberia for a long time when he wrote his piece for Crikey. He must have thought the principles he was fighting for were worth that sacrifice. I agree with him, and I hope for his sake his stunning protest about what is becoming deeply compromised business reporting at Fairfax will trigger reflection and action.

Some background. Fairfax has been repositioning itself to be more pro-business, a move given added impetus by its decision last week to end the separation between the Australian Financial Review and the metro dailies’ business coverage. Now, after merging the SMH and The Age business bureaus, all three are now in one division, meaning it is likely they will not compete for stories. The Australian Financial Review’s new editor Michael Stutchbury has been noticeably anti-union, pro-business and anti-government since he moved from The Australian.

Ian Verrender, the business editor of the SMH for eight years, took redundancy last year and used his final column, ‘A business reporter’s greatest value lies in asking hard questions’ to warn of what was to come at Fairfax:

A menacing danger quietly lurks behind the technological changes within the media, one that has the potential to debase one of the foundations necessary for a healthy democracy. Nowhere is that more apparent than in the way in which business news is presented, where the interests of a free press and commercial imperatives collide, often with devastating effects.

The more vulnerable media companies become, the less capable they are of withstanding the pressure of vested interests and the more susceptible they will be to attack. Many will adopt the easy way out, that it is best to simply not cause trouble…

Unlike politics or sport, those running big business have a great deal of power. Veer too far from the press release, question a little too aggressively and the mighty weight of a corporation suddenly is hovering above, threatening litigation, demanding your dismissal. The chief executive probably knows a few people on the newspaper company’s board.

…This is the final column I’ll pen for BusinessDay. It is an emotional parting but after 25 years, it is time to move on. There have been good times. There have been great times. And the ethos that was drilled into us all those years ago – that we work for the readers, for you – is something that remains true today and hopefully in the future, in whatever form The Age and The Sydney Morning Herald take.

So this is it. Time to clean up the desk. Then again, there is so much clutter and rubbish here, maybe I’ll leave it for whoever comes next. You need a legacy, after all.

Verrender’s column details the terrible toll on ordinary people of big business scams and bad practice due to soft pro-business reporting and spruiking by finance journalists and editors. Thanks to Paddy’s dummy spit, we know that the lessons of cosying up to big business have not been learned, and that compromised ethics are on the rise and getting worse.

The back story from what I’ve gathered today – and I would appreciate input from people in the know – is that there is a process of creeping advertorials in Fairfax business coverage. There have been protests by journos, but apparently management has reassured staff that there is no influence by advertisers (sponsors) on content. The idea is that journalists are commissioned to write for these special sections in the normal way, and write their stories untouched by the advertising sponsorship. However tensions are apparent, as sponsors have begun complaining about what is being written.

At the Australian Financial Review The Commonwealth Bank actually sponsors a column, an extraordinary concept in my opinion. Yesterday the first Commonwealth column, widely regarded by business journalists as ridiculous, was published. According to one source, ‘she gives 800 words to this guy to rant about how much he hates the federal government’.

Paddy read the column and fired off his Crikey piece, i’d like to think in the fine tradition of the straight-shooting Verrender columns, and in an attempt to honour his legacy. I republish it here, with permission. 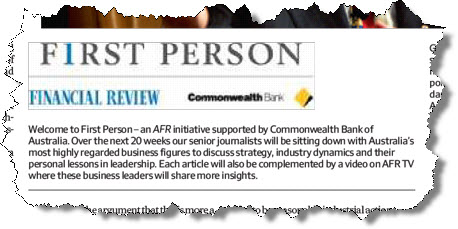 Today’s rubbishy “First Person” sponsored editorial in The Australian Financial Review is a perfect example of why the business sections of The Sydney Morning Herald and The Age should not be merged with the Financial Review Group — a decision announced by Fairfax last week.

Brought to you by the Commonwealth Bank, it features a rambling interview (plus vision!) with former Business Council president Graham Bradley, who calls for a wave of deregulation by the incoming Abbott government. Bradley declares over the past five years “we’ve not had a government in Canberra that’s been truly respectful of business, interested in business and supportive of business generally”.

Such creeping advertorial — touted as commercially necessary but also fundamentally ideological in its inevitable pro-business slant — has been noticeable in BusinessDay for at least a year: witness the introduction of saleable sections like Executive Style, My Small Business and IT Pro, as well as the use of outside columnists like mortgage broker Mark Bouris, former fund manager Matthew Kidman and even the return of media buyer Harold Mitchell.

The result has been to cramp space for news, features and the opinions and analysis of BusinessDay’s own reporters and columnists, who are guided by a code of ethics and have no vested interests to push.

The BusinessDay masthead was pinched from The New York Times but has gradually united the business teams of the Herald and Age, has gelled online and is now head and shoulders above any Australian rival in terms of readership, attracting more than two million unique readers a month.

BusinessDay is built on the legacy of reporters and editors like Ian Verrender, Michael West, Adele Ferguson, Ian McIlwraith, Elisabeth Sexton, Stuart Washington and countless lesser-known names who have built up a culture of investigative reporting — holding business accountable — and broken stories that matter not just for business but for the public at large.

BusinessDay writes for the consumer, not for industry. We are not the trade press. With exceptions like Neil Chenoweth that nevertheless prove the rule, The AFR’s business journalism is built on a fundamental contract between company and reporter: high-level access in exchange for soft coverage.

Too often — even for many of its own hard-pressed reporters’ liking — the result is PR-driven “churnalism” which shows up as “drops” (the poor man’s exclusive, or as Verrender once wrote, the press release a day early), “herograms” for business leaders, unreadable roundtables and conference-linked spreads featuring plenty of happy snaps of business leaders with a glass of champagne or mineral water in hand.

The result also has been a predictable skew on vital topics like climate change and industrial relations.

It is reporting with fear and favour. And you know what? Nobody reads it. Educated readers — The AFR’s demographic — hate it. Ultimately, even advertisers shun it. It’s a business model for business journalism that had been tried at both The AFR and The Australian. It doesn’t work.

Business readers are not fools. Very often they know more about a given story than the journalist. They want the facts, balance and genuinely independent analysis and commentary. Tell it like it is.

Management of Fairfax Media including Greg Hywood have assured us that politics, business and sport are the heart of its newsroom. The transfer of BusinessDay into The AFR tramples on the legacy of quality, independent, consumer- and reader-driven business journalism established at The SMH and The Age. Both papers will be much poorer for it.

I hope Paddy finds work in which his strong ethical principles are fostered and exploited for the benefit of citizens. Our site has little money, but I would be honoured to commission him to write stories if he is willing. He wrote the chapter in Not Happy, John! on John Howard’s relentless attacks on dissenting opinion during his time in office which I highly recommend.

Yes, he was crazy brave. He was naive in the extreme to believe he would not be sacked. Yet his arguments were based in his strongly held opinion, which I have long shared, that it is only by putting readers interests first that Fairfax will survive and prosper.

Trust, Greg Hywood, it’s all about trust. And what you are on about in this area, and in your foolish decision to back Murdoch’s atrocious campaign against any media reform, is guaranteed to destroy Fairfax, not save it.