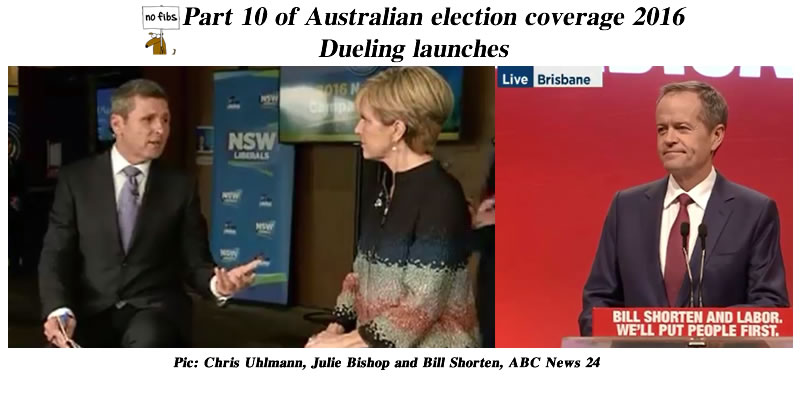 Fire in the belly

Up on my soapbox

.@abcnews Political Editor @CUhlmann gives us his view on #Brexit and its relevance to Australia #ausvotes #auspol https://t.co/sntfnpl3VY

Great to be with @billshortenmp in Brisbane to launch his final week election blitz… #BNElaunch #ausvotes pic.twitter.com/e4YGGrkZDz

ABC Insiders – Scomophobia is rife within the SSM debate.

Stopping SSM with a plebiscite

"Let's focus on the economy for a while": Malcolm Turnbull avoids question on marriage equality. #ausvotes #qldpol pic.twitter.com/sTCfqyx0Ez

Yes. And contrary to AG's release, I did go to his office yesterday on that very subject. https://t.co/DAmO3faIFi

Vote for Coalition because of Brexit

Ten Eyewitness News – Malcolm Turnbull says chaos and instability will ensue if Australians vote for anyone else other than the Coalition.

ABC News 24 – Australians should vote for the Coalition because of Brexit, Turnbull & Morrison say.

ABC News 24 – “Australians expect their leaders to focus on the economy, focus on their jobs.,” says Turnbull.

ABC News – The National Party fights to retain its influence in the Coalition.

Just don't mention the banks for another week.
My @smh business toon. pic.twitter.com/1cLObrrP8w

ABC News – Ignoring the GFC, Malcolm Turnbull urges a vote for the Coalition on an economic stability platform.

Will the real incumbent please stand up?
Discussing education with voters in Coffs. #igiveaGonski #Oakey4Cowper pic.twitter.com/HHlXwMME8p

SSM plebiscite to be overridden by free vote

ABC News 24 – Most Australians have a great interest in the SSM question, says Malcolm Turnbull.

ABC News 24 – Scott Morrison will respect the decision of the SSM plebiscite.

You might need help with that ballot paper.
My @smh business toon. pic.twitter.com/lnliwp9Mbv

MPs to have free vote on same-sex marriage regardless of plebiscite https://t.co/qpa33ZxZSr #ausvotes #sketchbook pic.twitter.com/JXgM5fuzMv

My #Brexit cartoon for @canberratimes. Does it need a question mark? pic.twitter.com/B6sdx6PLoo

"…and tell those running dogs I'd be prepared to consider a Cabinet of National Unity!" https://t.co/DvDAqQYfWH pic.twitter.com/Ml9LKwoXaU

Naviphobia, the fear of boats continues

Foreign Minister Julie Bishop has misquoted former British Prime Minister Margaret Thatcher whilst singing the praises of NSW Premier Mike Baird and condemning Labor governments everywhere. In answering a question about the Baird Government’s surplus budget, Ms Bishop attributed to Mrs Thatcher the line, “The trouble with socialists (is) they eventually run out of other people’s money.”

According to the Margaret Thatcher Foundation, the nearest quote to this comes from a 1976 TV interview with Mrs Thatcher where she said, “Socialist governments traditionally do make a financial mess. They always run out of other people’s money.”

Turnbull not committed to Cross-River rail

Newscorp and the Turnbull Government have reset their “Stop the Boats” fear crusade with just over two weeks remaining in the federal election campaign.

On Wednesday, The Daily Telegraph’s national political editor, Simon Benson, detailed an attempted Vietnamese asylum seeker boat arrival with the tabloid’s editor Christopher Dore claiming on the front page that people smugglers had re-started their trade due to the Australian election.

“The news comes as Prime Minister Malcolm Turnbull yesterday revealed people smugglers were using revelations Labor would provide a permanent home to 30,000 ­illegal arrivals in Australia as a marketing tool,” he wrote.

“Mr Turnbull’s intervention on the contentious issue follows The Daily Telegraph’s exposure last week that Labor would provide permanent settlement for the bulk of the 30,000 asylum seekers who arrived under the Rudd/Gillard government and are still awaiting processing in Australia.”

However, far from “re-starting” as the front page claims, in 2015, Immigration Minister Peter Dutton revealed that twenty boats had been turned back under under the Abbott-Turnbull Government’s Operation Sovereign borders policy.

No Fibs also covered the “Cash for turnbacks” scandal in mid-2015 in which alleged payments were made to people smugglers by the Australian Government to return asylum seekers to Indonesia. The government refused to comment to the media or at a special senate inquiry into the matter. The full blog of the saga is here, By hook or by crook – The #CashForTurnbacks scandal.

Also on Wednesday, Immigration Minister Peter Dutton confirmed that a Vietnamese boat had been intercepted in the Timor Sea with 21 on board. He admitted that the problem of people trying to reach Australia was ongoing.

“The issue of boats and people getting on boats and paying people smugglers that somehow it’s gone away, it’s just not the case,” he said.

ABC News 24 – Peter Dutton confirms an asylum seeker boat from Vietnam with 21 on board.

really cracking investigative work by @dailytelegraph…these things have taken months to slowly surface in the past … pic.twitter.com/eGoTZF1BrQ

ABC News 24 – Malcolm Turnbull has had to state for the third time in as many days that Medicare will not be outsourced, sold or privatised.

ABC News 24 – With Queensland protesters in the background, Malcolm Turnbull declines to comment further on Liberal Party candidate for Gellibrand Ben Willis who apologised for making comments against people who labelled Australia Day as Invasion Day.

ABC News – Scott Morrison says he knows how it is to receive hatred & bigotry.