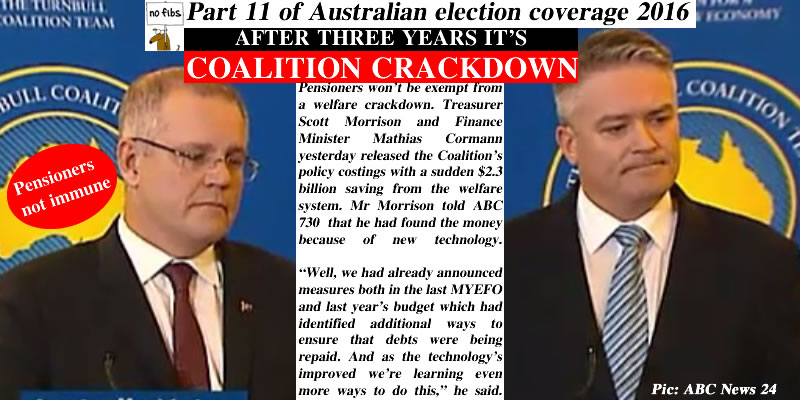 PM clarifies guarantee over no GP fee hikes, now says "doctors can charge whatever they like" #ausvotes #TenNews pic.twitter.com/IDg6LzBHlT

‘Sticking to the plan’ plan

ABC News – Malcolm Turnbull asked how he can be trusted after John Howard lied.

ABC News – Battlefield Qld: The fight for the Queensland capital of Brisbane.

ABC News – Where did they visit? Only a third of the country matters to the majors.

ABC News 24 – Terri Butler reflects on her Griffith by-election win & the election ahead.

.@TonyAbbottMHR says border security has been 'just an intermittent visitor' in this campaign #ausvotes #pmlive https://t.co/3AkcgfW8nO

Coalition to go after welfare

Pensioners won’t be exempt from a welfare crackdown. Treasurer Scott Morrison and Finance Minister Mathias Cormann yesterday released the Coalition’s policy costings with a sudden $2.3 billion saving from the welfare system. Mr Morrison told ABC 730  that he had found the money because of new technology.

“Well, we had already announced measures both in the last MYEFO and last year’s budget which had identified additional ways to ensure that debts were being repaid. And as the technology’s improved we’re learning even more ways to do this,” he said.

Antony Green’s election calculator allows you to apply recent polls to the seats to gauge the predicted outcome.

ABC News – Calls for a national recycling scheme as Australia’s rates 13th in the world.

ABC News 24 – Malcolm Turnbull says he is still a republican but it is not the front and centre political issue of the day.

ABC 730 – Both sides of politics take portions of quotes to suit political arguments.

ABC News 24 – Unhappy Mal: “How members respond to the plebiscite is a matter for them.”

ABC News – Malcolm Turnbull may have a new line of work as a TV chat show host if he loses the election.

Game of Tones, Season 2
<download episodes from season one in my gallery here https://t.co/0163VajLU3> #ausvotes pic.twitter.com/PzaOXSZq0I

Not a lot of policies

Ten Eyewitness News – the Coalition has released its policy costings claiming they can find up to $2.3b in savings from the welfare system.

ABC News 24 – Malcolm Turnbull says,”What political parties say they will support and oppose one time is not ultimately necessarily ultimately what they will do.”

ABC News 24 – Battlefield Qld: Eliza Borrello with an update from the marginal LNP seat of Petrie.

Tony Windsor has called in the lawyers. Get all the updates at AFR's live blog

Rorting in immigration?
Look over there!
My @smhletters toon. pic.twitter.com/jNQYUSvG9r

The next scene in the Tony Windsor ad.
My @smh toon. pic.twitter.com/2TwKU2DHDb

A joint investigation by Fairfax and ABC 730 has revealed allegations of corruption and a cash-for-visa racket inside the Immigration Department. Criminal gangs and people smugglers are engaging in a national scam of student and work visas charging clients up to $50,000 in cash.

Secretary of the Department of Immigration and Border Protection, Michael Pezzullo, has referred 132 cases over the past 12 months to the Australian Commission for Law Enforcement Integrity, the highest ever.

While the Coalition was focussed on asylum seeker boats, the borders became increasingly porous for criminals. Former immigration investigations head, Joseph Petyanszki, told Fairfax that, “”fear mongering” on refugees and asylum seekers has been used to deflect attention from the real problems in the immigration system.”

The scandal has prompted Senator Nick Xenophon to call for a review of immigration law enforcement and the introduction of a national corruption body similar to New South Wales’ Independent Commission Against Corruption.

ABC News 24 – Jamie Briggs on the run: Refuses to speak about his electorate of Mayo.

@BriggsJamie will be back. Cream always rises. A good man and a better bloke. Tough day for a man doing a good job.

@TurnbullMalcolm exit falters when he can't find Lucy. She's in a nearby shop. #ausvotes pic.twitter.com/pMcy0GeDbH

Set coming together for Saturday night. I just hope it isn't quite as freezing then. #ausvotes pic.twitter.com/hisJ2WvteE

Please, save us the hellfire, and the money.
My @smh cartoon. pic.twitter.com/75ZVxHENcX