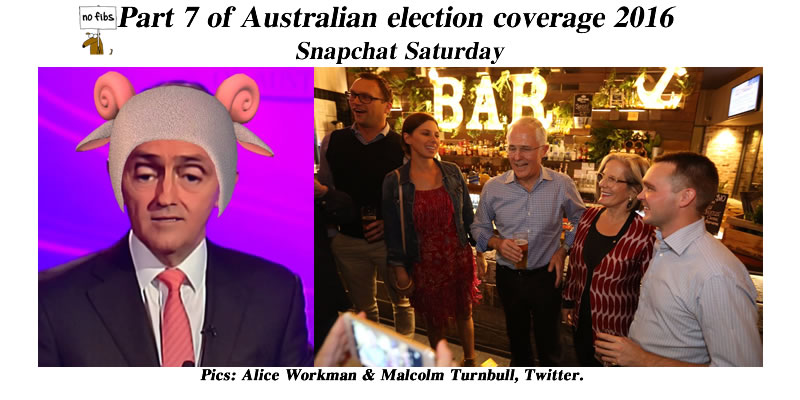 Jobs for the girls.

Mal signs up for Snapchat

PM Turnbull and his wife Lucy enjoy a drink during a Politics in the Pub event #auspol #ausvotes #ausvotes2016 pic.twitter.com/r1hRR2BmMD

Parakeelia Pty Ltd is a wholly owned entity of the Liberal Party with federal party director Tony Nutt and party president Richard Alston as directors. The company was established in 1989 by the then Liberal Party treasurer, Ron Walker and shares the same address in Canberra as the headquarters of the federal Liberal party.

It makes & sells a piece of software called Feedback which MPs and senators purchase for $2,500 using their taxpayer funded office allowance. This allows the party to collate constituent details, requests, issues, etc. The company then makes large yearly donations back to the Liberal Party, effectively laundering taxpayer money. A search of the Australian Electoral Commission shows donor records dating back to 1998-99.

On ABC 730, former Liberal MP for Tangney, Dennis Jensen said, “There was a very clear understanding there’s Feedback training provided to staff members and basically the training is to use it as a database politically rather than to assist constituents. Indeed the instruction given by Feedback trainers is that if there’s not a vote in it, don’t do it.”

ABC 730 – Parakeelia and the shocking abuse of taxpayer money by the Liberal Party.

#Parakeelia I wonder if the Libs misspelt it when they initially set up the company? Or is it unrelated? #ausvotes pic.twitter.com/sBn0e63X99

7 News Qld – Johnathan Thurston says, “we need the federal government to stand up.”

As Labor backs down on some Coalition budget measures, Tony Abbott's still out and about selling his 2015 budget pic.twitter.com/1n1Gs1u3Uf

Politics and the ADF don’t mix

Labor's @MikeKellyofEM told me it's a sad day for him having to cut ties with the ADF over his campaign material featuring him in uniform.

The Mercury still believes Tony Abbott is the prime minister.

Budget repair and tightening up tax benefit part A

ABC News – Labor will lower family tax part A for households over $100k.

ABC News 24 – Scott Morrison says budget balance is like a trip from Melbourne to Sydney.

ABC News 24 – Scott Morrison is very confident of the performance of the Cronulla Sharks in 2016.

Trolln’ on the Great Barrier Reef

I will be debating @JulieBishopMP at the National Press Club on June 21 – looking forward to it.

Sky News – Liberal Party associated Parakeelia has as its directors Liberal Party federal director Tony Nutt and president Richard Alston. The company makes large donations back to the Liberal Party. Cabinet Secretary Arthur Sinodinos says it is a legitimate use of taxpayer funds for his office.

There's been stream of federal donations via CSG company-they have vested interested not to see WaterTrigger perform pic.twitter.com/xA1N7YCyzW

Ten News: Both leaders flew to Tasmania to survey the flood damage.

ABC News 24 – Malcolm Turnbull says any one storm cannot be attributed to global warming but mitigation measures need to be reviewed after significant events.

ABC News 24 – Malcolm Turnbull saved from funding questions over Cradle Mountain by minders and his jacket.

.@TheEllenShow Many thanks for supporting the #GreatBarrierReef. We all have a role & the Aust govt is doing more than ever to protect it

.@TheEllenShow But challenges remain, and so Australian governments are investing $2 bn over the coming decade to manage & protect the #GBR

.@TheEllenShow We'd love to invite you out to visit the #GBR and see the Reef & some of the work we're doing in the catchments

.@MathiasCormann doubts @billshortenmp can bring home the bacon when it comes to delivering a surplus #ausvotes pic.twitter.com/tQcSraMqfG

Peter Dutton, the MP that wasn’t there

ABC News: Both LNP and Labor are seeking to unseat Bob Katter in Qld electorate of Kennedy.

Ironing out the election

Seems our George
@GChristensenMP is having a sook #auspol #qldpol #mackay #qld pic.twitter.com/SSgFcVmv1Q

George Christensen says turtles don't vote. May be he should raise a @GetUp for the funding? #ausvotes #qldpol pic.twitter.com/a2nK4qhGCR

ABC News 24: “This was a storm, a cloud”: Malcolm Turnbull explains the Picton extreme weather event.