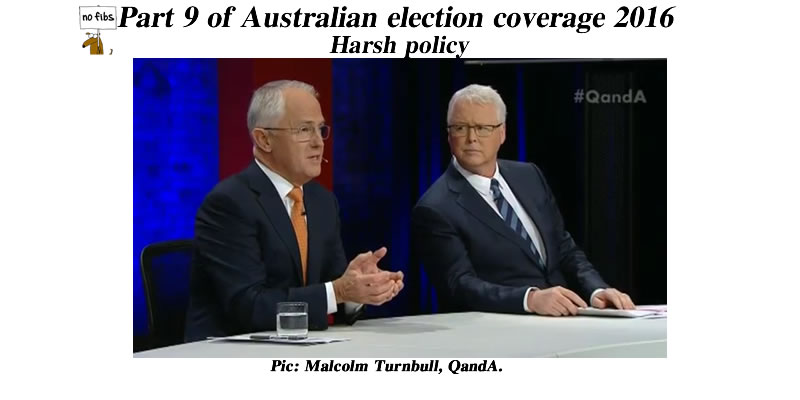 Father of the internet.

A Current Affair says Peter Dutton didn't know about rare visit until crew was on Nauru https://t.co/J4xzYJ2IJs via @smh

What happened to the ABCC?

Alice Workman reported, “The Australian Building and Construction Commission, aka the reason we are holding this early double dissolution election, has pretty much disappeared from the election campaign.”: Here’s proof no one is talking about the reason for the entire election.

#FakeTradie revealed to be a real metalworker who supports the Liberal Party #ausvotes https://t.co/RIr6BFBDNL pic.twitter.com/DixrSyIExm

The Daily Tele does over the indies. Again. #ausvotes pic.twitter.com/vbsRWduEdz

Pre-polling in the remote community of Yirrkala in Arnhem Land. #ausvotes pic.twitter.com/ys59rReDDP

Thanks to #Parakeelia I guess, this last flurry of #ausvotes flyers is getting pretty niche #faketradie pic.twitter.com/dNdN4eKAW3

The Liberal Party’s new attack ad released on Sunday, “Labor’s war on the economy” featuring a builder, has been lampooned on social media using hashtag #faketradie.

Twitteratti claimed the protagonist was Andrew MacRae from Medina Inc. However, Mr MacRae stated on Twitter that he was not the person in the ad.

Dear all,
It's not me. I'm not in the ad. I didn't voice the ad. I had nothing to do with the ad.#faketradie

He also confirmed to Daniel Piotrowski and Rachel Eddie at Daily Mail Australia that he was not the man appearing in the ad and he did not perform the voice over work at the end.

The Liberal Party says the man in the ad is a real tradie telling the ABC, “The tradie is real, unlike Mr Shorten’s claims about Medicare.”

Political parties employ actors in many ads and it’s rare when a real person appears.

As for the impact of the ad, Deputy Political Editor at the Guardian, Katharine Murphy, commented, “But clever in this way: the ad explicitly references fatigue and disaffection in the electorate.”

ABC News 24 – “Australians can spot a fake when they see one”: Bill Shorten on Fake Tradie.

7 News – Malcolm Turnbull’s cities of the future as Newspoll locked at 50pc.

Medicare privatisation plan may have gone to cabinet

If #Medicare project never went to Cabinet, why was Cabinet #FOI exemption used to protect this PM letter? #ausvotes pic.twitter.com/NOwpWVcDGM

Malcolm Turnbull has fixed the NBN

Three days after dismissing a Labor policy of loans for Arrium, Innovation Minister Christopher Pyne today committed the Coalition to a similar scheme. He’d previously told the media that the risk to jobs at the factory may have been overstated.

On Thursday, opposition leader Bill Shorten promised a $50 million bailout and a further $50 million in loans. Prime Minister Malcolm turnbull described the pledge as “un-business” like and “highly political”.

However, on Sunday, Mr Pyne confirmed that the Turnbull Government would commit a $50 million loan package to Arrium

Great to be in #Wentworth for the @evanevanhughes Labor launch. Tony has Malcolm handcuffed on #climatechange pic.twitter.com/mUT8e3A185

How to vote – Senate

I'm publishing as many samples as I can of Senate how-to-vote recommendations at https://t.co/Izzh1wxir9 #ausvotes happy to receive more

ABC News – Bill Shorten has declared the election a referendum on Medicare.

ABC News 24 – Bob Hawke in a moment of silent contemplation at the Labor launch.

Who would Nick Xenophon vote for?

.@barriecassidy puts @Nick_Xenophon on the spot … and gets the answer he was expecting #insiders #auspol #ausvotes https://t.co/iiBbe8dLWW

You can watch the whole online Leaders’ debate here:

Abbott was close to war on three continents

James Brown's claims about military adventurism by the Abbott government are just fantasy.

ABC Kitchen Cabinet – Cash and the poor: Michaelia says she knows how it is to have nothing.

Michaelia Cash says the chalice of blood is almost within her grasp. #ausvotes pic.twitter.com/fBo2DRi8mZ

ABC News 24 – Bill Shorten is pledging a six week training program for young people and then a six month placement with a full-time wage.

George Brandis should be sacked

Chris Uhlmann calls it for Coalition

ABC News 24 – A wrap of the Turnbull camp from Alphadale.